Y&R Day Ahead Recap: Phyllis’ testimony in court is compelling and Victor has a few surprises up his sleeve

Summary for Tuesday March 25, 2016: Victor's court case commences, Phyllis has an outburst, and Victor decides how the case is going to be run. 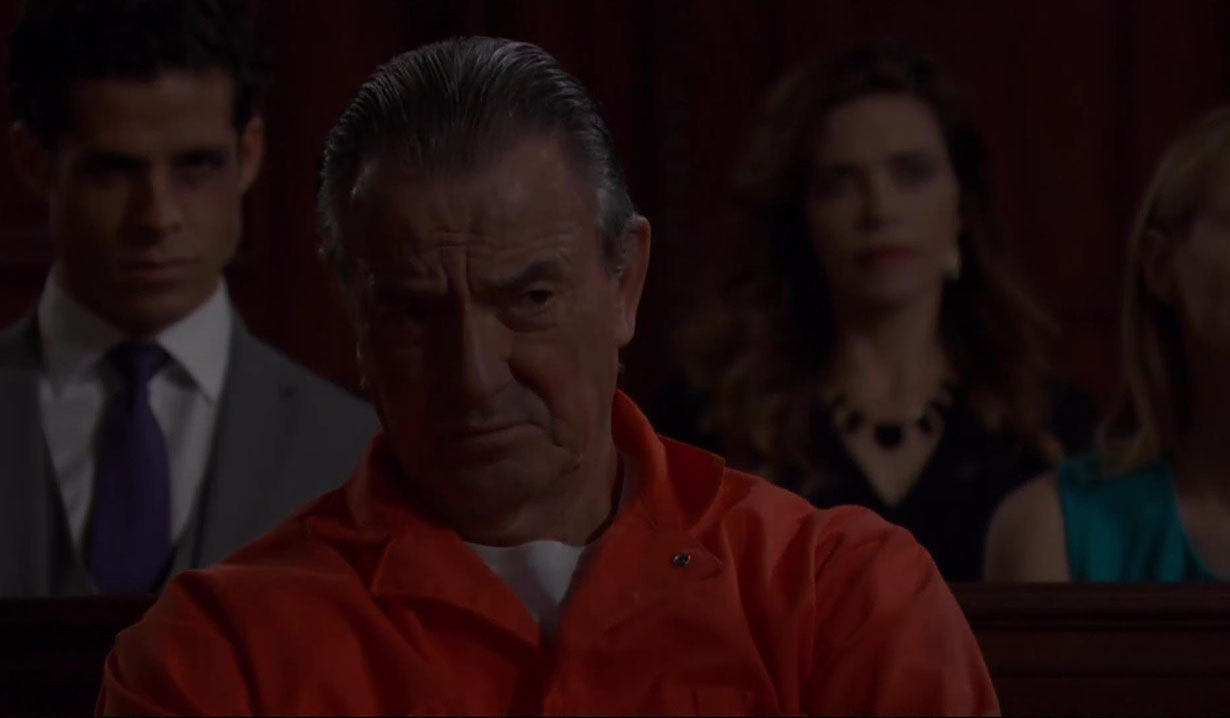 In court, as Michael is mid-sentence in his opening statement, Phyllis jumps up and yells at Victor for his lies. The judge bangs his gavel and tells her to shut up and sit down. Michael, wary, continues as Jack massages his head. Victor doesn’t like the opening statement but Michael promises he’s laying the groundwork. “Phyllis’ outburst made them all look like a bunch of lunatics.” The judge calls for a recess and Michael asks Victor to change into his suit. Victor asks the court guard  to take him to the visitation room while Nick puts Luca on notice. He’d better not hurt Summer. Nearby, Adam is puzzled by Michael’s statement, which wasn’t very powerful. Summer goes to see Victor and admits she’s starting to see him for who he really is. Victor’s sorry he hurt her mother but was trying to defend his company and family. Her mother wants to turn her against him. Summer reminds him everything her mom said was true. Victor reminds his granddaughter that Phyllis rented a car in order to mow Christine down. He asks how she thinks her mom has Passkey. He’s keeping quiet about his suspicions because he feels guilty about Marco. Outside, Jack tells Phyllis to stop sabotaging her own cause. Later, the case resumes and Marisa’s called to the stand. She tells Christine that Marco couldn’t have done what he did to Phyllis on his own. Victor paid off the warden to get Marco out. When Michael refuses to badger the witness, Victor’s pissed. Chris calls Paul who identifies a still of Victor and Marco and Santiago from a maximum security video outside of Peru. They were unable to depose Santiago, “For some strange reason,” Paul says, looking pointedly at Victor. Michael cross examines. How can he make the claim that the man in the photo is Santiago? Paul saw the photo from a list. Jack’s called to the stand. Chris asks if Victor was operating in self-defense. Jack says no and Ian Ward was behind Paragon. Jack gets into being held hostage and knows Victor took great pleasure in his suffering. Victor smirks. Jack details Kelly drugging him and keeping him hostage. He recalls Kelly’s death. The judge asks Michael if he has questions but he doesn’t. He reserves the right to call him at a future time. Victor wants Michael to go after “that wretched bastard.” Christine calls Phyllis.

BREAKING! Daytime Emmy Nominations and why they’re not being televised

Phyllis tells the court that there were differences between Marco and Jack. It wasn’t until months later she learned that he was a sick criminal, “Who was having intercourse with me, who I did not know or give my consent to.” She points at Victor and said he knew what was happening and didn’t stop it. “I hate you for what you did to me,” she sobs. She gets up and goes at Victor and is taken out of the room to calm down. Summer stays with her and asks her to relax. Back inside, Christine calls Adam, then Noah then Abby, Nick, and Victoria. They all basically say the same thing, that what The Great Victor Newman did was criminal, sickening and immoral. Victoria admits this was the most difficult thing she has ever had to do, to turn her father in. Victor yells when Adam says he washes his hands of his father. Billy leaves the room to comfort Phyllis. She’s a mess and can’t be in the same room as Victor. He brainwashed her daughter. Back inside, the people call Nikki. She talks about Jack and Victor being bitter rivals. Christine asks if Victor has a history of bending the law. Michael interjects but Nikki wants to answer that question. She confesses her husband has no respect for authority. She’s been forced to adhere to his rules if she had a prayer in making her marriage work. Maybe it’ll take something drastic to hammer it into Victor’s head that actions have consequences. “Victor, you have been the love of my life but I don’t know you any longer,” she says. She’s excused when Michael reserves the right to call on her later. Victor calls Michael mad. The state rests. They take a recess. Victor wants Michael to call Luca to the stand though Michael doesn’t like it. When Luca gets up there, he tells everyone that Michael is deliberately attempting to throw this case. There are gasps around the court room. Nikki leaves and Phyllis says she’ll never forget her battle. They holds hands and bond. Billy comes out and tells the ladies they have to get back inside. They enter the room and Luca tells the judge that he eavesdropped on a conversation where Michael was conspiring with Phyllis to ensure Victor gets sent to jail. Victor fires Michael, a man he used to call his friend. They adjourn court until Monday morning so Victor can hire a new lawyer. Victor decides to serve as his own counsel and calls himself to the stand!

For all the new casting changes, please visit Soaps’ Y&R comings and goings.

Luca yells at Jack, Billy, Phyllis, Michael and Lauren, “What was I supposed to do lie?” He says it wouldn’t have been honorable.

Christine tells Jack to brace himself because Victor’s calling him to the stand.

Victor gets decked out in a suit and tells Paul that he’s ready.