Y&R Day Ahead Recap: Victor shocks Adam with an offer…

Summary for Wednesday March 23, 2016: Family gathers to discuss banding together to ensure Victor goes to jail, and Victor has a deal to make with Adam. 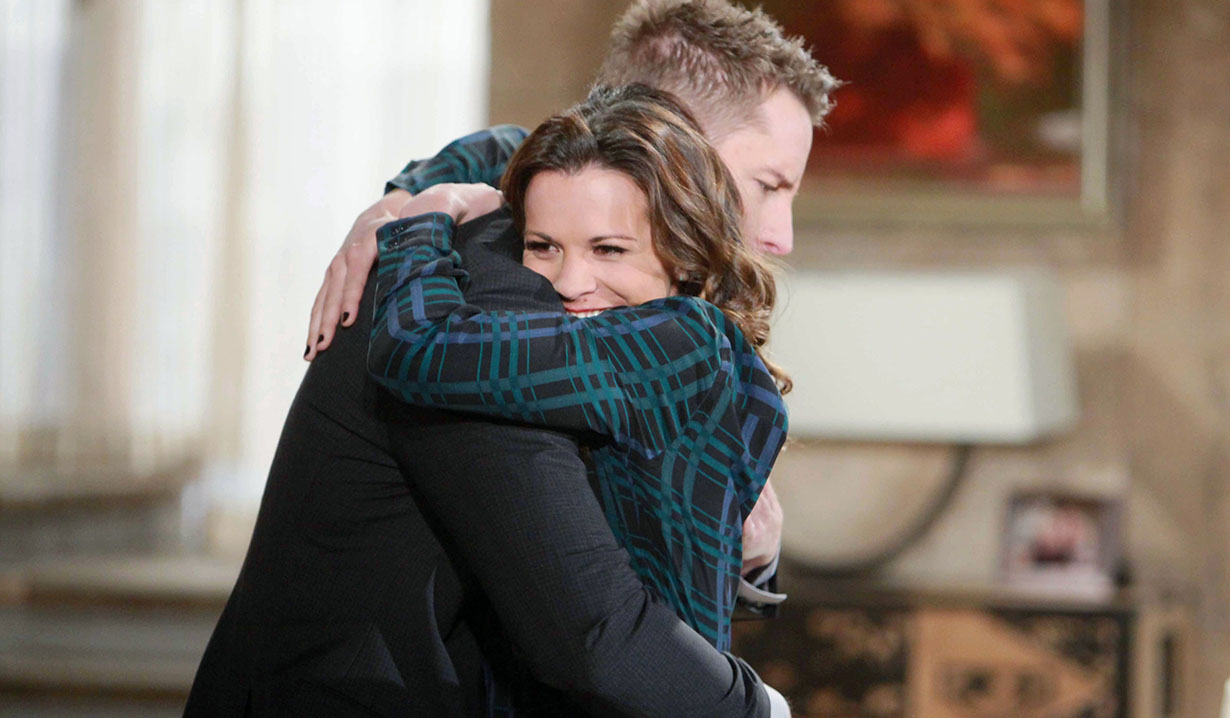 In the jail, the guard blathers about Victor’s granddaughter being the only one to visit. Vic’s waiting for his lawyer to come by.

At the club, Phyllis knows the risk Michael’s taking and if he wants to back out, she’ll understand. He refuses to allow Victor to evade justice again. Summer’s testimony probably won’t hurt them but if there’s one shaky Newman, their plan could be destroyed. Adam has Michael worried.

Christine arrives at Chelsea’s looking for Adam. Chels says he’s setting up offices in Chicago. Adam appears. He’s back. He’s returned to put his “old man behind bars.” Christine worries he’ll waver. Adam promises that it’s not going to happen. Chris coaches him on using yes or no answers. She goes. Chelsea runs to a meeting. Phyllis arrives moments later to make sure Adam’s on her side. He’s reassuring but wonders if Phyllis wants more than jail time for Victor. “I think you want to see him humiliated.” Phyllis just wants justice and yeah, suffering.

At home in bed, Sharon dreams that someone’s giving her Sully wrapped up in a blanket but when she opens the blanket, there’s no baby. She wakes up, startled, waking Dylan up. He reassures her and asks what it was about. She says it was the same day Sully was born. She opens up about the dream and remembered thinking he didn’t look the same way Noah looked when he was born. Dylan blames himself for her anxiety. Sharon denies that’s the case and rushes to get to her new job on time.

Nikki meets Victoria at the Top of the Tower. Stressed, Victoria insists they need to remain a united front and can’t let Victor off. Nikki vows she isn’t going to be the one to bail. They agree it’ll be hardest on Victoria and will ruin her relationship with her father forever.

Michael arrives to see Victor at the jail. He shares his plan for court on using all of Victor’s relatives, stating everything Victor did was in the name of family. Victor says, “You’re going to do everything you can to get me off.” Michael declares that he always does what he says he’ll do but gives Victor an out. Michael goes and Adam arrives. He thinks there’s a way his father can avoid the trial by making a deal. He doesn’t want to see his dad humiliated. Victor’s confident he won’t be and wants Adam to take over the company. He’ll plead guilty if Adam does.

At the club, Nick admits to Sage he doesn’t want their life to revolve around the baby. He thinks Sage is hovering around Shawn too much. It’s having a negative effect. Sage will do better. Chelsea approaches. The job offer still stands. Sage decides to take her up on it. Nick goes and Sage and Chelsea meet Sharon at a table nearby. They discuss Victor’s case and babies.

Back at home, Shawn is happy to see the paint has been selected for the baby’s nursery.

Noah and Nick appear at top of the towers. Victoria texted them. They all agree they need to be ready. Victor’s going to come after them with all that he has. Christine arrives, glad to have found the family together and asks why they met. They share their strategy to remain a united front. This pleases her. Once everyone’s gone, Victoria starts bawling.

Paul arrives at Crimson. Where’s his grandson? Dylan says the baby’s in the back with Esther. They discuss Victor’s case and then Dylan confesses he can’t get images of Patty out of his head because of Sharon’s dreams. Paul brushes off the connection. When Sharon shows, Paul goes off to see his grandson. Sharon gives a glowing report about her first day which was cut short when her nightmare popped into her head. They rehash what they already know about the psycho doctor and Sharon thinks her dreams are telling her Sully doesn’t exist. Dylan puts her fears to rest. The kid’s real.

Sage and Nick arrive home. Shawn has painted the nursery. Sage and Nick aren’t impressed. She should have asked. In fact, they’ve not been honest with her and need to talk. Sage will try not to be overprotective of Shawn but explains her reasoning behind it. Shawn reveals she’s been judging Sage but will stop. She divulges that she can’t imagine cooler parents for her kid.

Christine arrives at the club and spots Michael meeting Phyllis. They discuss their scheme and that Michael thinks Victor’s up to something.

Luca to Marisa: “I’m not here about Victor. I want to give you a gift.”

Phyllis yells at Summer, “I am your mother – how can you betray me?”

Victor tells Michael, “There might not be a trial.”