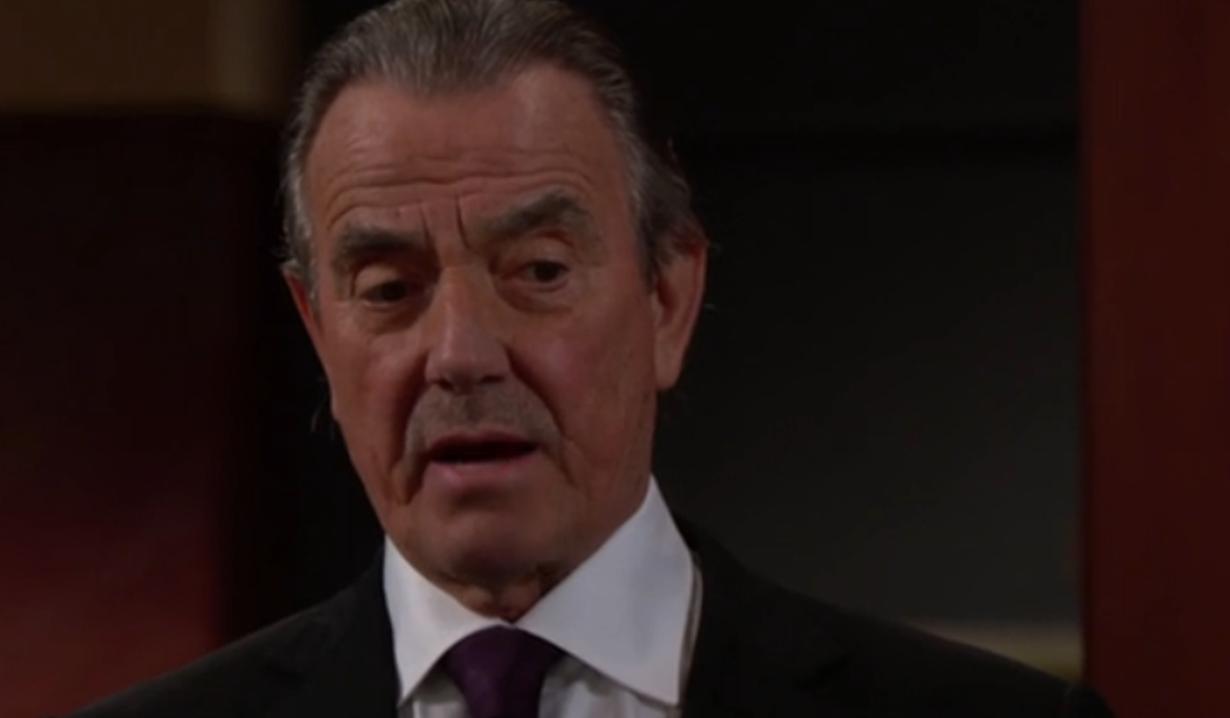 At Newman Enterprises, Summer is appalled when Victor tells him the family’s going to vote him out. He reads that Jabot is projecting huge revenues and wonders how that’s possible; something’s suspicious. Victoria enters and informs him the vote is going forward, but she’ll always love him. Victor demands to know if Victoria was secretly working with Billy Boy. Summer admits that Billy was secretly working with Natalie behind their backs. She couldn’t tell Victor because her mother was involved too. Victor booms, “Well I’ll be damned!” Summer leaves and Victoria insists Billy wouldn’t go behind her back. Victor asks if she’s serious and rants about her falling for Billy’s crap again and again. “How can you?” Victoria is sure Nikki asks herself the same thing.

At the Club, Billy and Phyllis discuss Moxley’s press conference. Jack appears and mentions the new revenue projections. “Apparently, a lot has been going on behind my back.” They tell him they’re developing Victor’s project. Natalie appears. Jack complains about not knowing and wonders how the press found out. Luca arrives. “You can thank me later.” Phyllis and Billy argue with Jack until Phyllis takes a call from Summer. Jack lashes out at Billy and questions Natalie’s ethics. Natalie says Victor didn’t understand how she works. Jack tells Billy it’s a declaration for war. Luca says Victor will be in prison soon. “We can corner the market.” Jack asks, “We?” Luca explains his position, and leaves with Natalie. Jack turns back to Billy – why would he do this? Billy says to get him justice. Jack hollers at Billy not to make this about him. They argue.

At Summer’s apartment, she tells Phyllis she told Grandpa everything. Phyllis isn’t happy. Summer cries and lets it out that Victoria was present. Phyllis apologizes for putting her in this position. She warns she’s given Victor an excuse to lash out and hurt people again. Phyllis doesn’t know if Billy and Victoria will survive this.

Phyllis returns to the Club as Jack tells Billy he doesn’t need him to defend his wife, and Billy retorts, “Well, somebody has to.” Once alone, Billy looks up to find Victoria there. “You lied to me.”

At the hospital, Ashley and Simon are waiting for her latest test results. Stitch appears. They discuss the situation with Max. Ben’s hoping things will turn around. After, Simon cautions Ashley when she learns her numbers are worse. Simon promises he’ll save her life.

At Crimson Lights, Abby tries to interest Max in doing something fun. She asks what would make him happy. Max snaps at her. She pleads for him to give this a chance. He hollers that his mom’s dead because of her and runs. She chases him and doubles over. “Max, please. I need you!” He hesitates until she screams. He gets her phone to call 911.

At the hospital, Abby is okay. Stitch asks if Max upset her. Abby describes the scene at Crimson Lights and admits she was afraid Max wasn’t going to help her. Stitch thinks it was her imagination. Max enters. He’s glad Abby and the baby are okay. Stitch hugs Max in thanks.

At the lab, Hilary wants to ‘christen’ her new office with Devon. Neil enters and finds them on the sofa. They dress hastily as Neil questions them about Ashley stepping down. Hilary exits for a meeting. Neil asks Devon if he’ll let her get away with this. Devon insists she proved herself. Neil was watching her ‘prove’ herself just now. Devon reminds him she saved the press conference. Neil can’t believe they’re pushing Ashley out. He warns Devon that his wife is playing people and working angles. “Sure seems like the old Hilary to me.” Ash and Simon arrive. Neil tries to get Ash to join his foundation. Hilary reappears. She thinks it sounds great. Simon jumps in and informs Hilary that Ash isn’t going anywhere. Neil pulls Ash aside to ask about Hilary, but she says it’s her problem. Hilary takes Neville to her office, and Devon asks Ash why she hasn’t fought harder. She can’t give him any more answers. Hilary, meanwhile, thinks Neville’s ‘fondness’ for Ashley is a distraction. He’s saving her life. Hilary hollers that he’s useless to her without results.

At Summer’s place, she is angry to see Luca there. He tells her if she wants to blame someone, to blame Victor.

At the Top of the Tower, Neil is talking to Jack and Phyllis about Ashley when Victor strolls in. He hollers about the project and ‘playing the victim’. Phyllis hisses that she is the victim. Victor warns Jack that when he’s down he comes back stronger than ever, and next time will grind him into the dust!

Nick asks Sage, “What are you saying?” She replies, “That I think you are looking for ways to sabotage this adoption.”

Jack tells Paul, “You need to lock Victor up again. He is out of control.”

Billy tells Victoria, “I had nothing to do with that.” Victoria replies, “After all these years, you’d think you would be a better liar.”

Y&R Day Ahead Recap: Victor is out...