Y&R Day Ahead Recap: Victor is out on bail and involved in several confrontations 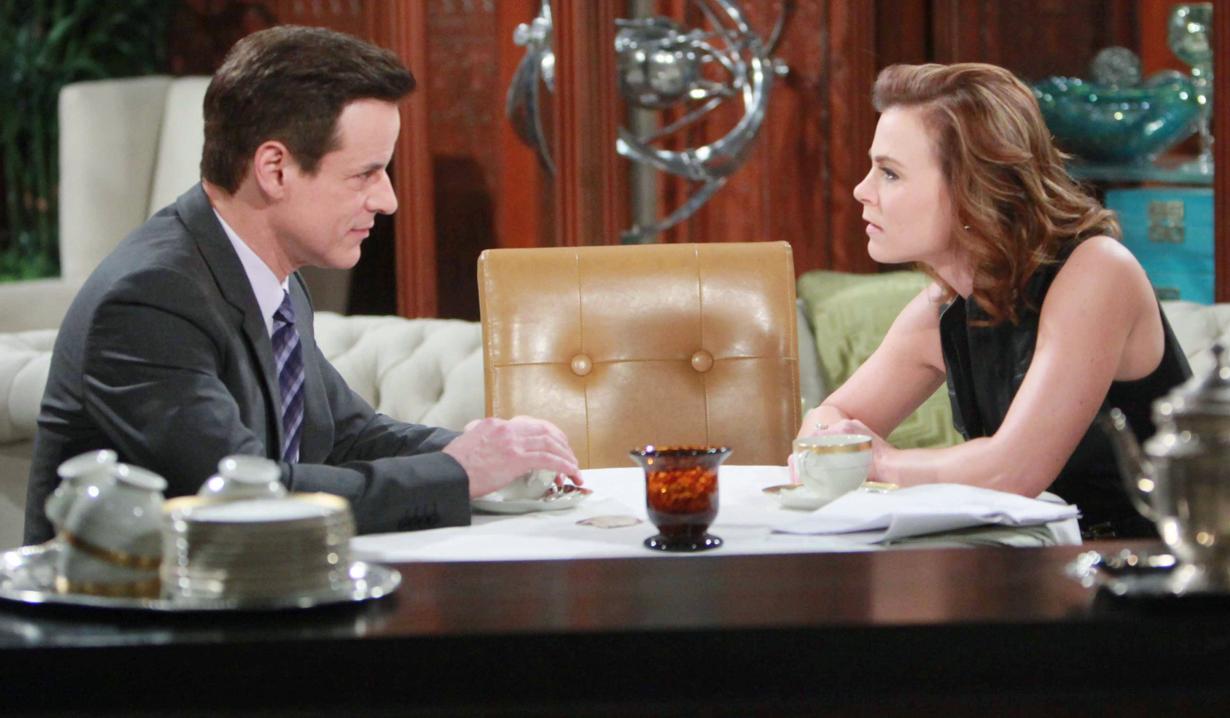 At Newman Enterprises, Victoria feels bombarded. Nikki gives her a pep talk. Victor appears, out on bail, and orders Victoria out of the chair. Nikki and Victor argue about Victoria being a traitor. He doesn’t want to hear about how he hurt those obnoxious people Phyllis and Jack and orders them out. Victoria informs him she’s having the board of directors throw him out of Newman. Victor erupts. They exit. Elise Moxley arrives. Victor is pleased she was ‘assigned’ to his case. She’s tired of the past discretion being held over her head, but tells him, “I know exactly what I have to do.”

At the hospital, Dylan vouches for Stitch with the social worker accompanying Max, but she can’t take his word for it. Elsewhere, Sage calls Nick out for encouraging Shawn to form an attachment to the baby. “I want this baby!” Nick reassures her and Sage apologizes; it was an emotional day and they’re just so close to having their little boy again. Shawn appears. Sage invites her to eat with them. Nick looks wary.

At the Jabot lab, Stitch worries to Abby about losing Max. Stitch gets an update call from Dylan at the hospital. Dylan urges him to get an attorney.

At the Club, Michael tells Phyllis she’s asking him to betray everything he believes in. Jack appears. He feels it’s not the way to handle the situation with Victor. Phyllis argues it’s the only way. She has zero confidence in Christine’s ability to make the charges stick. Michael rants about wanting him to jeopardize his license. Jack learns Victor made bail. Phyllis debates with Michael about operating outside of the law like Victor does. Jack keeps interrupting. Michael tells Phyllis she’s asking too much. Abby and Stitch arrive to see Michael. Jack and Phyllis keep arguing. She’s had it. He grabs her arm to stop her and assures her they’ll get justice. She says ok, they’ll try it his way.

At the hospital, Michael, Stitch, and Abby meet with the social worker. Stitch and Abby try to clarify what happened to the social worker. In a room, Dylan talks to Max about the seriousness of the situation. Dylan calls the others in. Max admits he exaggerated when he talked to his teacher. “Dad’s never hurt me.” The social worker still has to keep Max until a judge signs off. Stitch reassures him. Dylan compliments Stitch on how he handled things. Elsewhere, Abby worries to Michael that social services has a file on Ben now – they’ve got a baby on the way, and she’s concerned Max will ruin things for their family.

At Crimson Lights, Sage tells Shawn next time they’ll go to the Athletic Club; she also tells her about the ranch. In a moment alone, Nick questions Sage about giving the hard sell and looks worried. Nick gets a call from Victoria and leaves. Sage jokes with Shawn about craving jelly donuts, and Shawn takes it as criticism. After, they both apologize.

At the Top of the Tower, Victoria and Nikki prepare to meet with the board. Victoria muses that Nick doesn’t know what she’s going to ask of him. Nick arrives and they fill him in. Nick needs to focus on his family and tells them about the adoption. Victoria asks him to just consider returning to help. Nick suggests they back away and let the company consume him…like an alcoholic hitting bottom. Elise Moxley approaches Nikki and remarks on her family’s legal problems. She has great faith everything will work out as it should. Down in Victor’s office, Phyllis and Jack enter as he’s bellowing into the phone. They break the good news that Jack if free and clear of charges, unlike Victor, who is going to prison. Victor tells them not to count on it. Jack and Phyllis go to Top of the Tower and see Moxley leaving the Newman table.

Around town, everyone watches on their devices as Elise Moxley holds a press conference saying she had an affair with Victor Newman, and therefore, must recuse herself from his case. In Top of the Tower, Nikki looks stunned, and in his office, Victor closes his laptop.

Neil says to Devon, “I’m warning you son, it sure seems like the old Hilary to me.”

Jack says to Phyllis and Billy, “Apparently, a lot has been going on behind my back.”

Summer tells Victoria and Victor, “Natalie was in touch with Billy behind our backs.”