Summary for Friday March 4, 2016: Phyllis asks a favor of Michael, Stitch has trouble with Max, and Nick and Sage attend Shawn’s ultrasound. 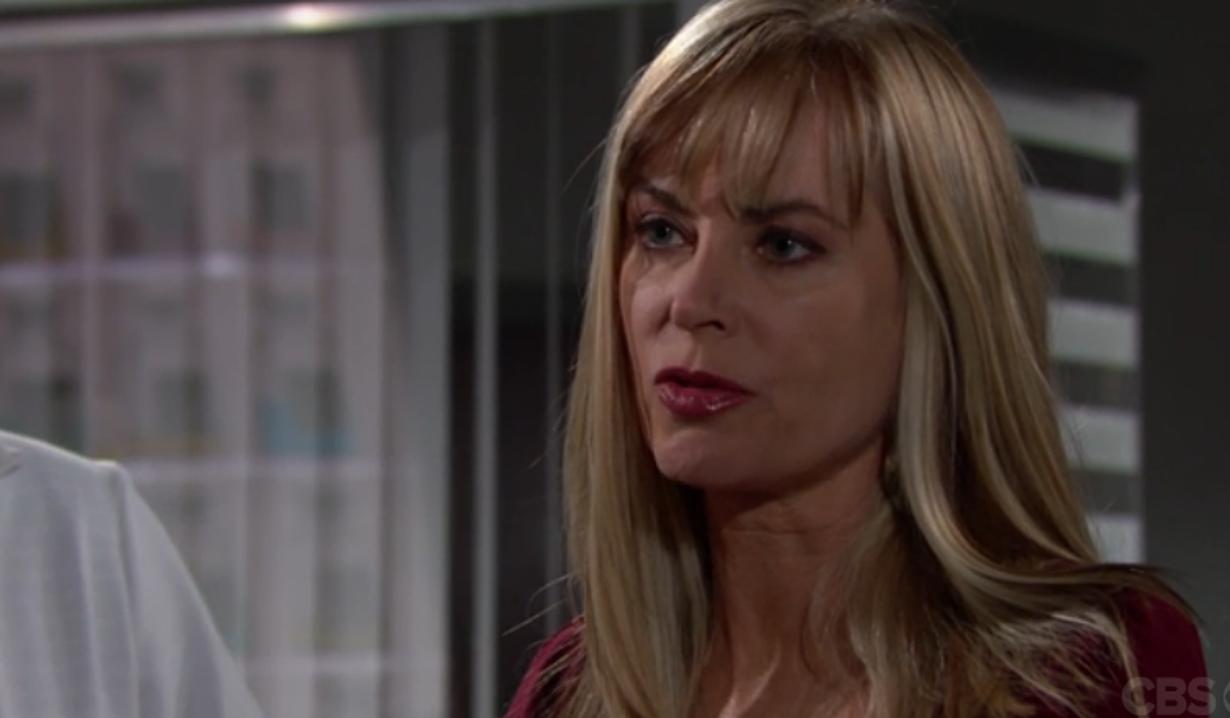 At Crimson Lights, Sage hopes the mess surrounding Victor isn’t scaring away their baby mama. Shawn appears and asks Nick and Sage to come to her ultrasound. After, Sage questions Nick, who she senses is getting cold feet. Nick worries about her getting her hopes up. Sage is sure it will work out.

At Sharon’s house, she and Noah discuss Victor. Dylan says the case against Victor is pretty tight. Noah’s concern is that Marisa not go to jail for protecting him. He’s willing to cut a deal to save her. Dylan is impressed, but it’s not up to him. He’ll try to look out for Marisa. Once alone, Dylan and Sharon kiss. They apologize for recent misunderstandings. Dylan sees Noah, Mariah, and Faith as his family too, so they come first. They leave to get Sully’s shots.

At the Club, Michael joins Marisa and Phyllis, who would like Michael to represent Marisa. Marisa worries about Noah. Michael scoffs that he won’t spend a second behind bars. Phyllis adds, “Because his last name is Newman.” Noah arrives. Marisa joins him. Phyllis asks Michael for another favor – she wants him to defend Victor. Michael asks why she would want him to defend a man she detests. Why would she want him to see he was acquitted? Phyllis leans across the table. “Who said anything about acquittal?” Michael hoped having her say it out loud would bring her to her senses. On the contrary, Phyllis reiterates that she wants Michael to use every legal skill he has to make sure Victor never sees blue sky again. Upstairs, Noah tells Marisa there’s only one way to protect her from going to jail. She assumes he means running, but Noah says they’ll have to get married. Marisa reminds him she’s still married to Luca.

At the hospital, Max takes off on Stitch, who gets paged to the ER. Abby tells him she’ll find Max. She does, and tries to explain that Stitch is upset because he got bad news about how his sister died, but she can’t tell him. He grumps about being a kid. She advises him if doesn’t want to be treated like a kid, to ‘man up’. Stitch joins them and apologizes. Max wants to go back to school and take his punishment. Later, Sharon and Dylan run into Nick and Sage at the hospital. Shawn arrives and Sharon only praises Nick to her, not Sage, and warns about a baby needing a lot of care. Sage and Shawn go into the ultrasound. Sharon tells Nick maybe the adoption isn’t such a bad idea. Nick joins Sage and Shawn – they learn the baby is a boy. Meanwhile, Dylan finds Stitch and tells him what happened with Jack and Kelly was self-defense. He also tells him the police are involved with Max – a teacher is obligated to report it if they think a child is possibly being mistreated at home. Dylan warns Stitch that social services is interviewing Max and to get a lawyer.

At the Jabot lab, Devon and Neville question Ashley’s sudden decision to step down. Ashley talks about Hilary being incredibly clever and goes to pack her desk. Devon takes Hil aside. “What did you do?” Hilary snaps at him as Abby comes in. She learns Ashley stepped down and accuses Hilary of pushing her out; Devon would never do this. Elsewhere, Neville confronts Ashley. “You’re not stepping down, you’re running scared.” He’s figured out exactly what happened and wants to confront her. Ash asks him not to, the project should be led by someone healthy. She questions him about her protocol not working. He just needs more time. She doesn’t have more time. He embraces her as Abby enters. She realizes Ashley is upset and reminds her she quit Newman to work with her. Ashley can’t discuss it anymore. Abby goes. Neville tells Ash if she goes, he will too. Hilary can have her office and choke on it. Ash tells him to make her better so they can bring the bitch down together.

Abby returns to the hospital and Stitch fills her in on the issue with Max. Elsewhere, Sage asks Nick why he told Shawn to look at the baby – does he want the adoption to fall through?

At the Top of the Tower, Hilary tells Devon not to be a downer. He says it feels wrong to push Ashley out. Devon didn’t invest in this venture to have her climb to the top. He wants to know what she said to make Ashley step down. Hil lies that Ash wants quality time with her pregnant daughter. Devon would like quality time with his wife, who is too busy with corporate intrigue. She offers lots of quality time for that night.

Jack angrily tells Phyllis he’s had it with her reckless attitude. Phyllis hisses, “Your not the only one who’s had it.” Jack grabs her arm. “Wait, wait, wait…”

Stitch, with Abby at his side, says, “I’m scared, Michael. I could lose my son. Will you please help me?”

As Nikki looks on, Victor orders Victoria out of his chair. “I have work to do.”

Y&R Day Ahead Recap: Victor is out...