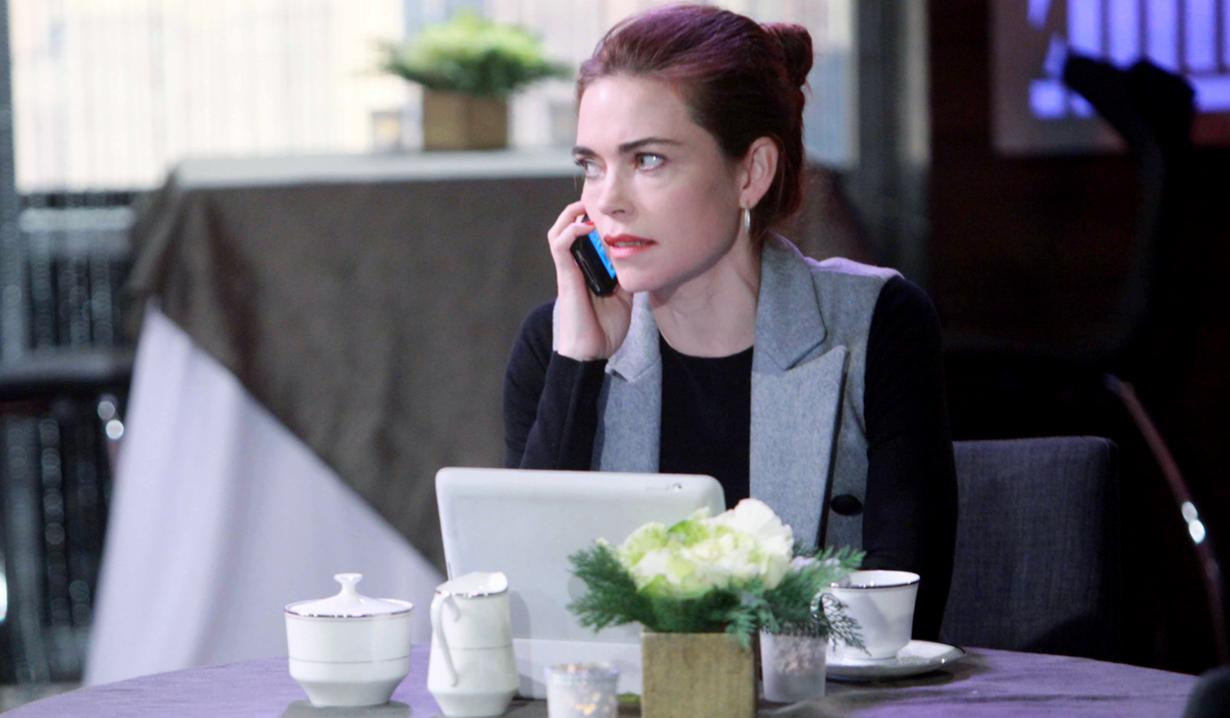 At the Club, Abby tells Victoria by phone that Ben still doesn’t know about Kelly. He arrives. Nearby, reporters hound Phyllis. Abby and Ben rescue her. Abby stops Phyllis before she can mention Kelly. Once alone, Abby breaks the news to Ben that Kelly kidnapped Jack, who was forced to kill her. In a suite, Jack tells his story about Kelly to Christine as Michael listens. He needs to know if he’s going to prison. Chris warns he could be facing extradition. Jack wants Chris to believe he never meant to hurt anyone, let alone kill anyone. Chris takes a call and Michael warns Jack to keep quiet. Chris hangs up. “You are not going to believe this.” She tells them the death count from the ship was zero – apparently a rich American paid them all to stay in hiding. Jack steams as he realizes it was Victor. Chris thinks it will be self-defense with Kelly. Jack’s free and clear. Phyllis arrives and wants Christine to do her job and nail Victor to the wall. Jack and Michael caution it will take time. Phyllis mentions Ben is downstairs. Michael wants Jack to stay away from him, but Jack won’t listen. Downstairs, Ben is furious when Jack appears. They have a confrontation. Phyllis informs Ben that Jack doesn’t remember what happened – he was tied up and drugged. She imagines Abby left out that Victor was behind it all. He could have killed Kelly to set Jack up. Jack apologizes to Ben, who storms out. Upstairs, Michael warns Christine this case will change lives and to be prepared for anything. Later, as Christine is leaving the Club, Phyllis challenges her to tell the press how she’ll bring Victor down. Christine announces she will get justice for all Victor’s victims. Phyllis tells Jack she wants Victor to suffer. Jack asks when is it enough? Phyllis feels that, once again, she doesn’t know him at all.

At the Jabot lab, Hilary wants to try out some new looks on Simon, but he’s not interested. Hilary pushes him to try on outfits. Devon appears with Ashley, who nixes Hilary’s idea. Bickering ensues. Devon wants to know what Hilary has planned. She is irked. Ashley says it’s too soon for marketing and she’s overstepping. Ash and Hilary separately express their frustration to the men. Simon gets Ash smiling by saying he’ll become a centerfold. Meanwhile, Devon tells Hilary that Ash can’t be expected to take orders from her; she needs to finesse things. Later, Hil finds Ashley passed out on her desk. She spots her meds. When Ash wakes up she asks what’s wrong with her and holds up the meds. Hil figures Ash is a patient of Simon’s. She’ll keep quiet if Ash steps down. Ash confronts her about trying to blackmail her into quitting. “You’re disgusting.” Simon and Devon reappear. Hil says they’ve come to a new understanding. Ashley informs them she’s stepping down and would like Hilary to take over for her.

At Crimson Lights, Kevin and Mariah learn Natalie has a new legit partner who will let them in. Luca arrives. Kevin says, “Oh hell no!” Natalie explains this was Billy’s idea. Kevin and Mariah accept it. Luca wants to buy them out. Kevin refuses despite Mariah’s protests. Luca muses that he’ll find another way to limit those in the inner circle. Kevin says if he wants a fight, he’s got it. Luca leaves as Michael arrives. Kevin and Mariah question him about Victor’s fate. Michael admits this could rouse him to whole new heights of megalomania.

At the Top of the Tower, Billy assures Victoria he didn’t gloat to reporters about Victor being in prison. He tells her not to feel guilty. She worries if he beats the charges there’ll be hell to pay. Billy doesn’t think that will happen and urges her to take over Newman. Victoria thinks Adam will swoop back in, but Billy thinks she can take him. Natalie appears wanting to work. Victoria dismisses her, but Natalie says she was talking to her new boss, Billy. Victoria snarks about Billy being back in the game and Billy gets rid of Natalie. Billy tells Vikki that Victor fired Natalie. “It’s just business.” Victoria concedes it was a good business move. She wants to finally bring the Newmans and Abbotts together.

At the hospital, Abby finds Ben. She’s with Max who was in another fight at school. Ben grimaces. “What is wrong with you?” He shouts at the kid to get it together and stop making his life harder than it already is.

Ben asks Dylan, “Why are the cops involved?” Dylan says the teacher is obligated to report it if she thinks a child is being mistreated at home.

Marisa asks Noah, “How can you keep me out of jail?” He says they’ll just have to get married.