Y&R Day Ahead Recap: Victor imagines what life without him would mean to his family

Summary for Wednesday March 2, 2016: Victor imagines his family would be worse off living without him in their lives. 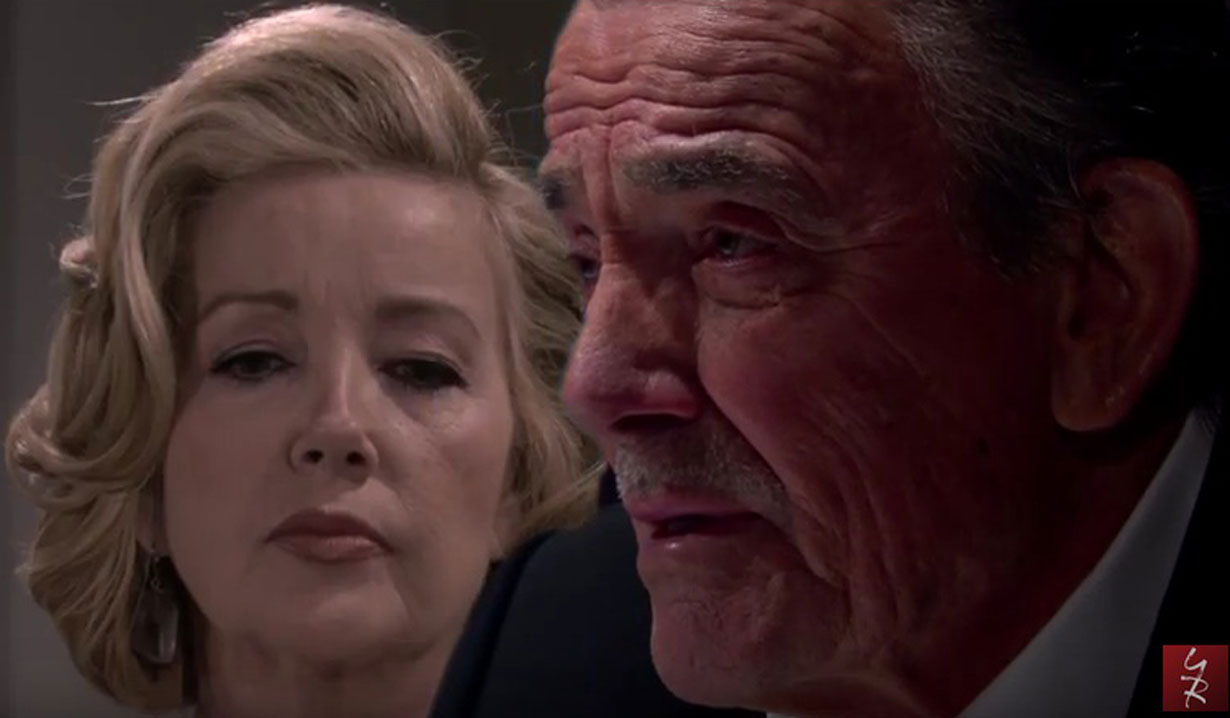 At the hospital, Victor yells at everyone to get out, calling them traitors. Paul handcuffs Victor to his bed. He challenges them to find out how their lives would be without him.

A guard takes Summer to jail to see Victor. She asks him to tell her he didn’t hire Marco to replace Jack. He asks if she’s read the Robert Frost poem, ‘The Road Not Taken,” and she has. He simply went down the road less traveled and did what he could to protect his family. He doubts they’d be better off without him…

Looking grungy and homeless, Nikki meanders into Crimson Lights, panhandling. Sharon, dripping in jewels, snidely offers her money and tells her to get a job. “Though people would pay you to keep your clothes on, now.” Nikki mutters what a bitch she is and Dylan refuses to give his mom cash, knowing she’ll spend it on booze.

At Newman, Nick’s married to Lily, who needs money for charity. He’ll give it to her if she makes it worth his while. She kisses him passionately. Nikki walks in. He sighs, wondering how she made it past his secretary. Nikki wants a few bucks to get back on her feet. Nick heard this story for the past 20 years and gripes about all the men in her life who tried to take their turns with Victoria. He calls her a loser and says to get out.

At the Club, Billy asks Victoria to pace herself as she downs some champagne. Paul and Esther drop by to congratulate Billy on being President and CEO. Nikki asks for money but Vicki offers to get security to escort her out. Nikki asks Paul for help finding Victor but he refuses.

Back in jail, Summer calls her grandma strong. She never thought of what Nikki would do without him. Summer says her mom was violated and humiliated because of the Mustache. She too feels violated. Victor says he hoped Phyllis would have figured out Jack was Marco. Summer asks him to imagine if Jack had done this and Nikki was sleeping with some psycho. “Maybe we would have been better off without you.”

Back at the club, Abby flirts with Ben. She intimates she’s a prostitute. Surprised, he asks why. She likes a certain lifestyle. He senses there’s a story. She goes on about being an orphan.

Summer sits at comatose Phyllis’ bedside. Summer’s convinced that the new protocol will mean she comes back to them. Phyllis flat lines and Summer cries out.

Back in jail, Victor asks Summer where Phyllis would be without him. Summer knows she wouldn’t be alive if it hadn’t been for the risks he took to save her life.But doesn’t he feel remorse for those killed? He tells her he deals with life threats constantly. They again ponder what life without him would be like for his family.

Back at the Club, Vicki’s flirting with other men. Billy tells her to grow up. She tells him she’s off somewhere where she won’t embarrass him. She heads to Santori’s where Luca’s playing the piano. They start making out and dancing until Billy finds her. Billy pulls a gun on Luca.

Back in jail, Summer agrees, maybe Victor is the glue that’s holding Victoria and Billy together. Victor laughs. Vicki deserves better. Victor hopes that one day Noah will understand why he did it. Victor becomes emotional when he tells her family means everything to him.

Back at Newman, Nick meets Adam and his wife Chelsea for the first time. They’re in matching jean shirts. “If dad could see us now, though he didn’t give a damn about anybody,” Nick says. They’ve never even met him. Adam wants to partner with Nick on his family farm but Nick wants to buy it and sell it for more. Adam feels sorry for Nick who doesn’t understand what family is. Chelsea pulls Adam aside, urging him to take the cash. He’s disgusted with her.

Adam, a stranger, walks into Santori’s and tries to stop Billy from shooting Luca. Victoria brings up Delia and they ask Billy what life would be like without her. Billy puts a bullet in him!

Back in prison, Summer doesn’t think his family is happy he took the road less traveled. He shrugs. He knows that in the end, his kids are better off with the choices he has made.

Back at Santori’s, Dylan places Billy under arrest. Billy blames Victoria, that slut, as Chelsea sobs over Adam’s dead body.

In prison, Victor calls Victoria most like him. She is the most loyal. Summer says he went too far. He didn’t even admit to anything nor has he stated he’s sorry. She doesn’t imagine he ever will, and walks out on him. Victor weeps once she’s gone and recites Frost.

At Top of the Tower, Nikki, Victoria, Nick and Abby gather to discuss Victor. Adam arrives and is told Victor was faking the pain. Victoria’s angry that Victor expected her to lie for him. Abby calls it unforgivable. Nikki calls Victoria courageous. Summer shows up. She visited grandpa and got nowhere. “Classic Dad,” Nick says. Summer admits Victor has done a lot for them. She asks them to hear him out.

Ashley yells about her personal life being off limits.

Jack asks, “I need to know how, Christine. Am I going to prison for doing this?”