Y&R Day Ahead Recap: Nikki and Victor have it out over the Marco reveal

Summary for Thursday February 25, 2016: Victoria catches Billy with Phyllis, Summer decides to help someone, and Dylan questions Sharon about Nick. 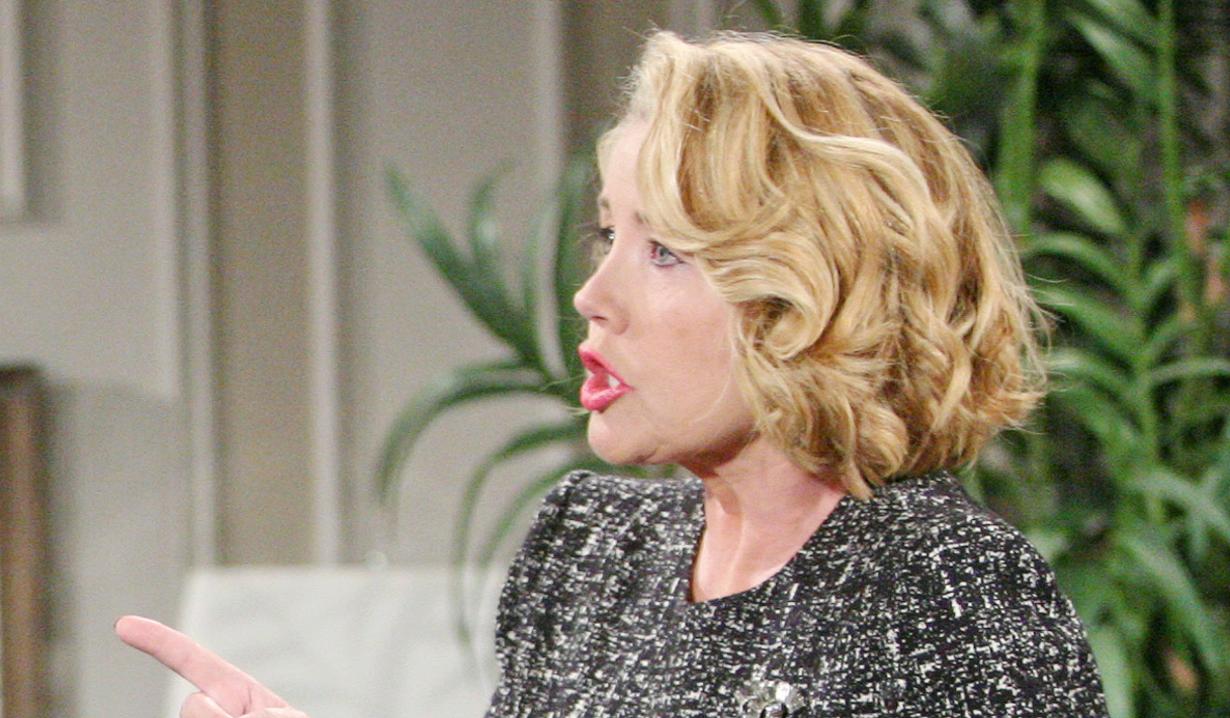 At Newman Enterprises, Victoria lights candles as she bickers with Victor about him holding a gun on Luca Santori. “You make threats, you inflict terror.” Victor says Luca needed to know what was going on, and so did Natalie. He talks about her trying to pass off a non-functioning program. Victoria can’t believe she tried to con him. In the Top of the Tower, Billy tells Phyllis there is something big between him and Victoria – vengeance against her father. Phyllis thinks they can call it justice. She unleashes a scathing rant against Victor, which Billy agrees with. He asks Phyllis, “What did he do to you?” Phyllis wipes away a tear and stands up. Billy embraces her. The lights come back on…Victoria is looking at them. Phyllis explains she was confiding in Billy…she’s not happy about Summer being influenced by Victor. Victoria senses a dig. Phyllis leaves. Victoria tells Billy that Victor’s not going to hurt someone he loves. Talk turns to Natalie trying to stall Victor and then magically producing a working program. Billy wants to make wedding plans.

At Summer’s place, she and Natalie gasp as Luca bursts through the door. They’re relieved he’s not dead. Luca says Adam just ordered him onto a plane, but he wanted to stay and find a way to fix this. Summer says Victor Newman does not forgive and forget. Luca can’t go home like this – he’ll be seen as a failure. He wants to make Victor trust him – if he has his approval, he won’t need his father’s. Luca needs a way to earn Victor’s respect. The lights come on. Luca tells Summer he needs to stay out of sight. She says he can stay there. Natalie is stunned. She warns Summer that Victor won’t be happy about her couch surfer. They argue. Natalie goes. Luca asks Summer why she’s helping him. She reminds him he hired her. They talk about families.

At Sharon’s house, she and Nick discuss Noah’s situation by the fire. Sharon leans on Nick’s shoulder. Dylan arrives. “I guess I didn’t need to worry if you were okay.” Sharon fills him in on Sage and the kids, who arrive within minutes. Faith and Sage explain that they went to Adam’s. The power comes on. Faith goes upstairs and talks turns to Noah. Dylan questions if there will be a trial – he thinks Nikki’s up to something. Nick and Sage leave. Dylan admits to Sharon that he’s upset she was there alone with Nick. They have a heated debate about Noah covering up his hit-and-run. Sharon wants to talk calmly. Dylan agrees – he’d rather discuss this than her and Nick cuddled up by the fire. She admits there’s still something between her and Nick…just like there is between him and Avery, and him and Chelsea…but he’s the man who has never let her down. They hug.

At the Club, Jack joins Nikki at the darkened bar. They talk about the Marco reveal she overheard. Nikki says Victor has to pay, but Jack wants to be sure no one else finds out about it for Phyllis’ sake. Nikki argues; they must want Victor to be punished. Jack says Phyllis can’t take anymore, and frankly neither can their marriage. “Let it go.” Nikki won’t say anything…to anyone but Victor. Jack suggests she leave him. Nikki gives Jack her word that he will pay for this. Later, Phyllis joins Jack, who breaks the news that Nikki knows about Marco. She seethes with anger after learning Neil knows too. “You get out of here.”

At Newman, Nikki tells Victor she ran into Jack…the subject was Marco Anicelli. Nikki confronts him about all of it, and says Phyllis was violated. “What could possibly be worth what you did?” Victor booms, “You! My family! I will always protect what is mine.” They argue over his methods being wrong. Nikki says it may be over and done with for him but it will never be over for Phyllis. She doesn’t want this life. Victor hollers at her to get out. She says she’s already gone. He keeps yelling as the door closes. At the Top of the Tower, Billy spots Natalie as he flirts with Victoria. He sees Victoria out and then joins Natalie, who is upset about the mess she’s in. He says he’ll handle it…and enjoy it. Downstairs, Jack enters Victor’s office. Victor still won’t admit he was wrong. Jack says Nikki’s the closest thing to his conscience. “God help you now.”

At the Club, Nikki tells Phyllis what Victor did was appalling. Phyllis says his repercussions will come, and they will be epic.

At home, Nick tells Sage tomorrow will be better. They kiss.

Summer tells Natalie, “My grandpa does not put up with people who are disloyal to him.” Natalie smirks, “I’m looking to screw over Victor Newman.”

Chelsea asks Adam to trust her with the truth. He says he’ll tell her everything.

Jack gives Phyllis a bouquet of flowers. She says, “It’s not enough Jack,” and throws them in the trash.