Summary for Wednesday February 17, 2015: Dylan and Paul disagree, Devon fires someone, and Abby gets news. 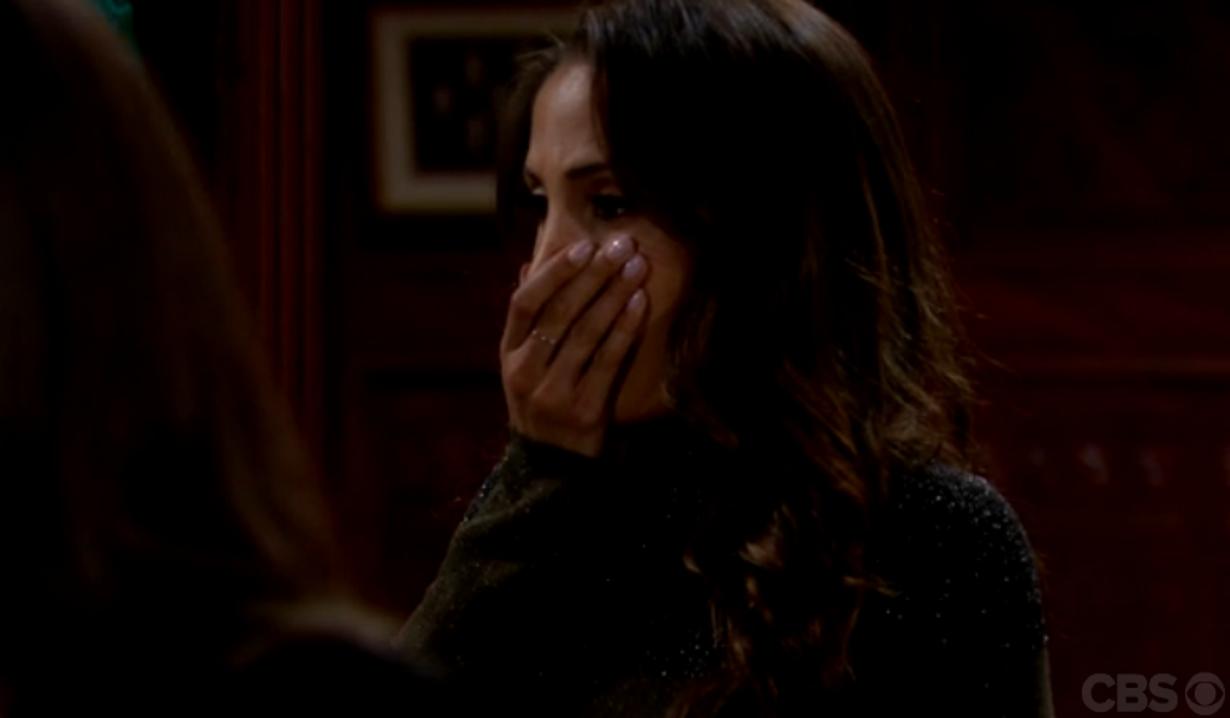 At home, Sage wakes up from a terrifying nightmare in which she is screaming and searching for a crying Christian. Nick reassures her. She needs to know why Patty did what she did.

At Crimson Lights, Paul tells Dylan to stop trying to make sense of Patty’s actions. Sharon arrives with the kids. Paul is glad Dylan has her and the children. After, Dylan keeps arguing with Paul that Patty knows something. Paul informs him the case is closed. Nick and Sage arrive and ask why. Sage joins Sharon and Faith and holds the baby. Sharon and Sage discuss Dr. Anderson’s manipulations. Sharon notes she can’t remember half of it, though everything was fine after she was handed her baby. Sharon says she can’t hurt them anymore, but Sage notes it doesn’t feel that way. On the patio, Nick and Dylan argue with Paul – they want to keep the Dr. Anderson case open. Dylan and Nick try to work out what she wanted. Dylan goes on about Patty wanting to warn him. Paul snaps that they have all the information they need and exits. Dylan tells Nick he and Paul disagree on this. Nick knows he’s torn up about Patty; he thinks maybe Paul’s right. Sharon and Nick speak – they realize both Dylan and Sage feel there’s more to the story. Nick tells Sharon that she helped him figure out who Sandy was, and he’ll owe her forever. Sharon wants them to be close. They look at Sage holding the baby. After, Sage and Dylan whisper about finding answers, though Sage tells Nick it’s time to get back to their life.

At the Club, Hilary is pleased that Devon stayed the night in her suite. She says nothing made sense since their honeymoon until now. Devon agrees it’s how things should be. Downstairs, Neil drinks. Neville arrives wondering why he was summoned. The reporters arrive for Neil’s press conference. Neville protests and they have a whispered argument. Neil wants to tell Hilary’s success story. Lily watches and questions Neil’s sobriety. He blows her off.

At the hospital, Abby freaks out to Stitch about her mother being pregnant. They go into her room. Abby tells Ash she’s glowing. Ash glares at Stitch. “You told her?” She insists she’s not pregnant – the samples clearly got mixed up somehow. Abby wonders if she and Simon Neville… Ash interrupts to say no – she doesn’t sleep with people she works with. Abby looks pointedly at Stitch. Ash gets a call from Neville to rush to the Club.

Ashley, Abby, and Stitch arrive at the Club as Devon and Hilary come downstairs. They all look on, concerned, as Neil takes the mic and begins the press conference. He tells the press about something ‘big’ three times before Neville grumbles that he’ll ruin the project and Devon steps in. Neil struggles with Devon and falls down. The press loom as Neil whispers angrily to Devon about stealing his wife twice. Ashley tells the press Neil isn’t feeling well. Hilary steps up, lauds Neville for saving her life, talks about his promising research, and appeals to the scientific community to embrace the protocol. Ash thanks her for saving the project. Stitch notices Abby feels off, and Devon confronts Neil and fires him. He’s drinking again and needs to get help. Lily protests, but Devon insists he’s doing the right thing. Neil says to hell with everybody and storms off. Lily gets into it with Devon and Hilary. She is furious that Devon fired Neil. Hilary reassures Devon. By the stairs, Ashley enthuses to Neville about Abby being pregnant. She warns Stitch will want to do more blood tests. Neville will keep saving her – she is now his life’s mission.

In a bedroom, Neil convenes with a case of liquor and staggers and mumbles, “That’s my wife.” He passes out.

At the hospital, Stitch tells Abby he put a rush on her blood work and asks her medical questions. She’s sure she couldn’t be pregnant. He gets the test results and tells Abby, “You’re pregnant. We’re having a baby, baby!” They embrace.

Phyllis tells Billy, “This has to work.” He replies, “The sooner the better.”

Luca tells Natalie, “We’re all on the same side here.” Summer appears. “The hell we are!”

Adam says, “Luca and Noah are working together to take down a common enemy.” Victor asks, “Who?” Adam says, “You.”