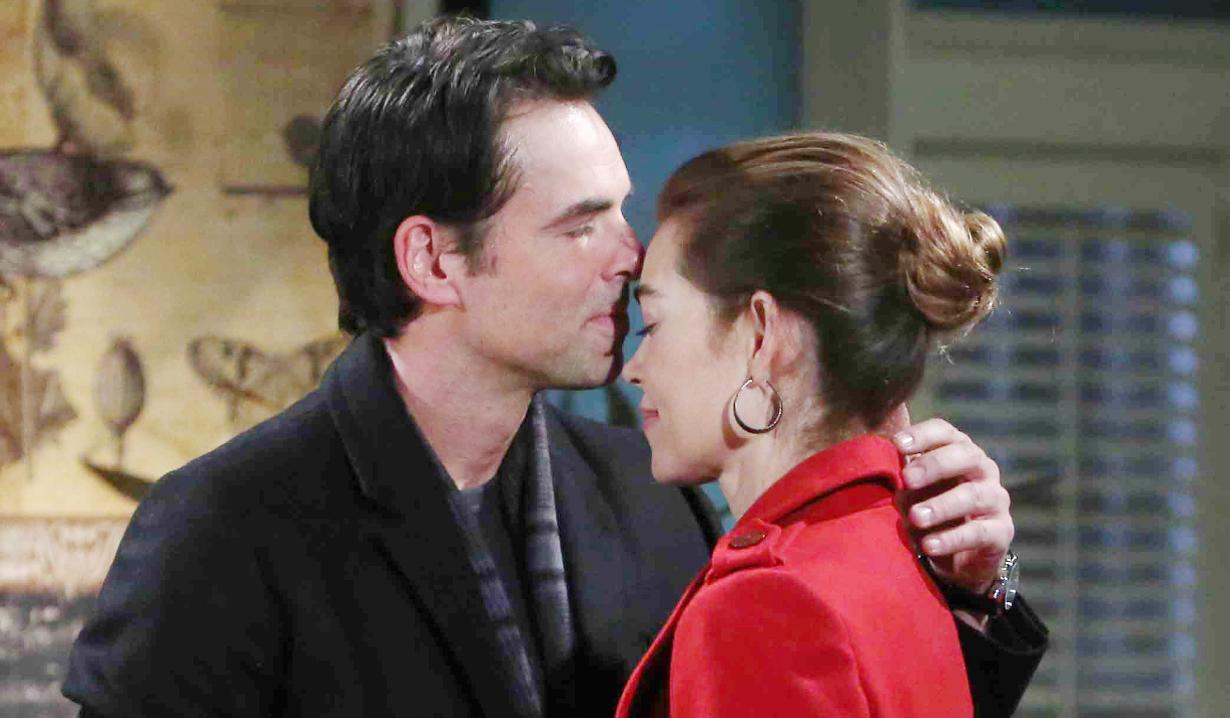 At the Club, Neil eyes up the champagne being poured for the Valentine’s Day event. He joins Lily, who confronts him about drinking again. Neil insists it was a little slip; he’s back on the program. Lily believes him. She suggests he apologize to Devon. After, Lily shares a kiss with Cane, who wants her to sneak away with him. In a suite, they kiss and fall onto the bed to have sex.

At the hospital, Abby’s dropping off Stitch’s Valentine’s Day gift early – she knows he needs to spend time with Max. Stitch says he enrolled Max in school and they need to act like a family. They make a date for later.

At the lab, Devon worries to Hilary whether working with them could cause Neil to drink again. Hilary feels they can’t risk it. Neil shows up and tells them about his relapse. He wants them to live their lives. They thank him. Once alone, Devon tells Hilary he needs them to have faith in him. Elsewhere, Simon asks Ashley if she has Valentine’s plans and gifts her with a bottle of pills wrapped in a red ribbon. Neil appears and wants to talk business. Neville assures him they will have a product ready soon. Ash has full confidence in Simon. Abby arrives with a marketing plan. She talks them all into going to the GCAC Valentine’s Day party later. Later, Ashley tells Simon she took the medication he gave her and feels up to going to the party.

At home, Billy awakens to see Delia beside the bed. He hugs her and she lectures him about proposing to Victoria. In reality, Victoria shakes Billy awake and kisses him. She talks about a party at the Club later. He wants to be alone and tells her to keep in touch from work.

At Newman Enterprises, Nikki shuts off Victor’s computer and reminds him they have plans. They are hugging when Billy appears. He’s there to inform Victor that he plans to marry Victoria again. Billy informs Victor he won’t stop them; he’s going to fight for his family. Nikki is happy and makes a pitch to Victor to support it. Victor appreciates Billy being man enough to come there. Billy also has a favor to ask him.

At Summer’s place, she tells Natalie that Kyle can’t get home for Valentine’s Day. Natalie thinks he could come if he really wanted to. Natalie’s never had a boyfriend, so doesn’t have these problems. Victoria arrives looking for a progress report. Natalie informs her she’s hit a wall and needs a break. She’s going to go to the Valentine’s Day party at the Club later. Victoria huffs that she needs to focus on work. Natalie won’t listen. Once alone, Summer works to convince Victoria that Natalie deserves a night off. Victoria gets a Valentine’s invitation from Billy in Italian and softens.

At the Club, Lily and Cane are giggling about their rendezvous. They greet Nikki and Victor, who are joined by Summer and Natalie. Victor reminds Summer to keep an eye on Natalie. Abby arrives and tells Victor she’s enjoying her new job. Neil watches the crowd and sneaks a glass of champagne. Devon and Lily have a conversation about Neil. Hilary says they’re all on the same side, but Lily cuts her off. Nearby, Neil is sneaking drinks. Cane tells Lily she’s done a great job tonight. Things have been better, but Cane says they still have things to resolve, which is why he hasn’t come home. Meanwhile, Nikki takes Victor home for a private celebration. Abby wonders why Ben isn’t there. Across the room, Hilary feels right being with Devon. “You are the love of my life.” Devon kisses her. Neil sees and promptly falls into a table. Everyone gapes.

At the hospital, Neville tells Stitch that he and Ashley were leaving the lab when she got weak. Ben wants to do tests. Ashley refuses.

At the Top of the Tower, Billy has rented out the place and decorated it as Venice. Victoria laughs at his bad Italian accent. They slow dance. Billy decides it’s the right moment and drops to one knee and proposes. Victoria accepts. Billy tells her this idea came to him today with help from an angel.

Chelsea shows up at Newman Enterprises in red lingerie.

Phyllis says to Jack, “I don’t want her to be pulled into his web.” Jack replies, “She’s as smart as it gets.”

Summer catches Luca putting something under the door of her apartment. “Surprise.”

Y&R Day Ahead Recap: Phyllis and...