Y&R Day Ahead Recap: Luca reacts to Adam setting him up

Summary for Wednesday February 3, 2015: Marisa pleads with Chelsea, Sage upsets the orderly, and Noah spends time with Billy and Victoria. 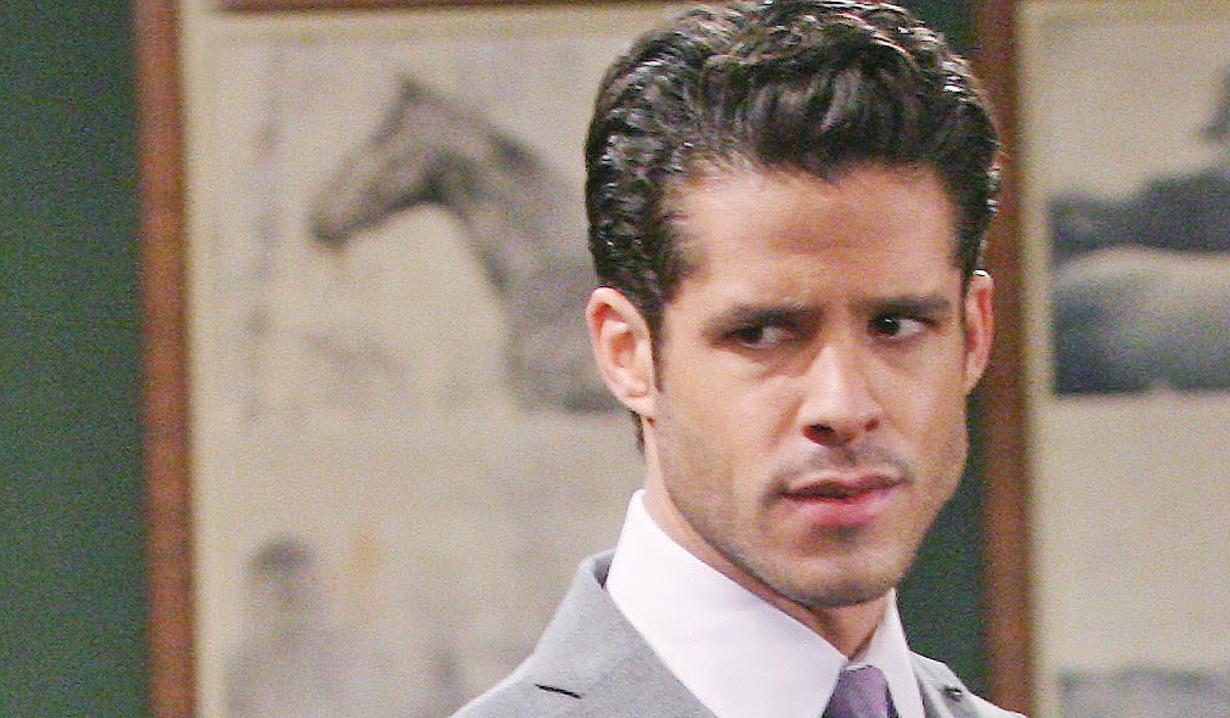 In their suite at the Club, Luca is set to take down his father. Marisa cautions that he can’t trust the Newmans. Luca counters, “Adam.” This is their chance to get out from under their father’s thumbs. Marisa worries something bad will happen.

At the penthouse, Chelsea sees a ‘good luck’ text from Victor on Adam’s phone. She confronts him. “So today’s the day you pull your con on Luca.” Adam defends the need to get the Santoris out of Newman. Chelsea has a bad feeling about it. Adam insists he’s in no danger. Chelsea thinks he’s blinded to the things that could go wrong by his need to prove himself to his father. Adam kisses her. “Trust me.” Later, Marisa arrives. She wants Chelsea to tell her if Luca’s about to be double-crossed. Chelsea muses that with Luca out of the picture, she could be with Noah. They debate. Marisa insists she needs to know where Adam is springing the trap on Luca…she needs to stop it before all hell breaks loose.

At Sharon’s place, Faith says she wants to live there with her, Dylan and Sully – it’s too sad at Daddy’s house. Sharon will talk to Nick.

At the Top of the Tower, Victoria complains to Billy that she can’t trust Natalie. Noah appears. He greets Billy heartily and says he’s so sorry about what happened to him. Billy says, “You were there…in the hospital room.” Noah recovers and stammers apologies for not visiting again. Billy steps away, and Victoria notes Noah seems tense. He complains about what Victor did to Marisa. Victoria warns Noah not to be taken over by his need for revenge like Billy. She defends Victor and the lengths he goes to for his family. Billy returns and flashes to Noah’s car. Billy assures Victoria they’ll find out who hit him. At the bar, Sandy kisses Nick, who says he loves his wife. Sandy wants to take away his pain; he’s such a good man. She references ‘if he’d only known’ something…but then covers. Nick gets a call from Sharon wanting to talk. Down in Victor’s office, Luca arrives to see Adam giving a file of evidence on Victor to an official. Luca tells the man to keep Marisa’s name out of it and hands over evidence of his father’s illegal dealings. Marisa arrives. Adam tells her Luca’s with the FBI. The official leaves. Luca tells Adam that felt good. Adam breaks that news that wasn’t an FBI agent, it was Steve from security, and all he gave him were harmless papers. Luca intones, “You set me up.” He presumes Adam wants him to leave the company in return for keeping the evidence from the feds. Adam says he needs to leave the country, actually, and warns what Luca’s father would do if he found out Luca ratted him out. Luca says if Adam goes through with this, Victor’s grandson Noah will go to jail for a hit-and-run. Chelsea appears. At the Top of the Tower, Marisa spots Noah sitting with Billy and Victoria and looks panicky. Noah joins her. “What the hell did you say to Billy?” she asks. Meanwhile, Billy tells Victoria he’s starting to remember.

At Fairview, Sage is leaving Nick a message that she found something on Dr. Anderson when the orderly grabs the phone receiver. After, Sage pleads with the orderly to let her make a phone call. She grabs his arm. The orderly injects her with a sedative. Dr. Anderson returns. The orderly fills her in. Anderson joins the drugged Sage and asks what she wanted to tell Nick.

At Sharon’s place, she talks to Nick about changing Faith’s living arrangements. They argue. Nick says Sharon scared Faith by telling her about Sage. Sharon counters that telling her Sage would be home any minute would be a lie. Nick feels Sharon just doesn’t understand. Faith appears. She confirms she wants to live there. Nick agrees to it. He checks his phone and hears Sage’s cut off message. Later, Sharon leaves Dylan a message about Faith staying with them.

Nick arrives at Fairview. Dr. Anderson says it’s past visiting hours. He talks his way in to see Sage, who tells him about the books on paralysis. Meanwhile, Anderson confirms the orderly filed a report on Sage’s attack.

Kevin muses to Mariah and Natalie, “Victor fought like hell for this, so why the ‘I’m just going to hop on my jet and get back to you whenever I can’ routine?”

Chelsea says to Adam, “Your big plan just blew up, didn’t it?”