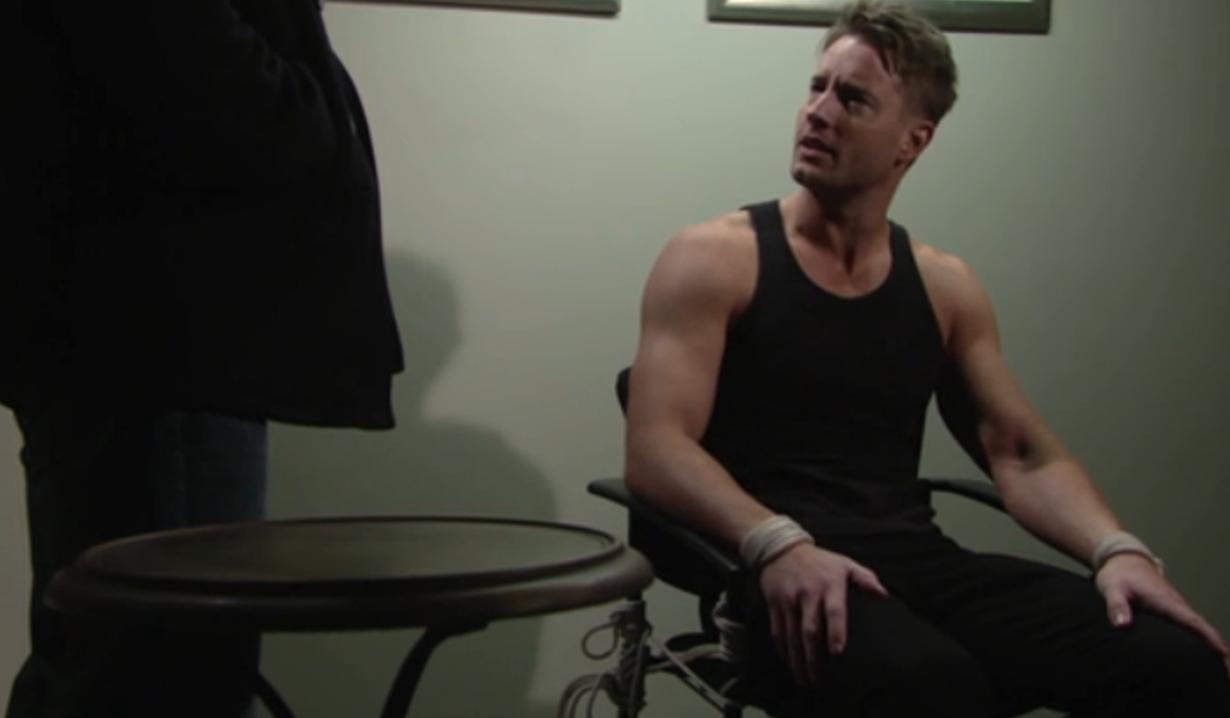 In the undisclosed location, Adam’s captor tells him it’s time to get him cleaned up; it’s almost show time.

At the station, Kevin tries to convince Paul to let him in on the exchange involving Natalie. Paul assures him nothing will go wrong, but Kevin doesn’t trust the kidnappers and certainly doesn’t trust Victor. Paul will allow Kevin to monitor the tracker from the station. “Stay put.”

At Crimson Lights, Sage is relieved that Nick agrees with her about Dr. Anderson. She’s come up empty trying to find out her maiden name – it’s like the woman buried it. Nick thinks he should confront her and try to get closer to her.

At Sharon’s place, she doesn’t want Dylan to go to Newman tonight; it’s too dangerous. Dylan insists it’s his plan and promises he won’t get hurt. He kisses her and the baby and leaves. Sharon calls Dr. Anderson to come over. When Anderson arrives, they discuss Sharon’s agitation over Dylan’s job. Anderson reassures her, and then gets a text from Nick asking to meet at the GCAC. Sharon sees it. Anderson tells her she’s helping Nick with Sage, and is worried she’ll become too attached to Sharon’s child. “Keep your distance.”

At Crimson Lights, Sage comments on how quickly Anderson replied to Nick’s text. She will take Faith to Sharon’s and see Sully. They kiss.

At Sharon’s place, she keeps Sage from going upstairs to see the baby. Sage questions her. Sharon admits she talked to Dr. Anderson. Sage sighs. “Of course you did.” She rants about Anderson and Sharon suggests she might not be as stable as she thinks. Sage hollers that Dr. Anderson’s the problem. Sharon again denies Sage the chance to see Sully. Sage hugs Faith and goes. Faith asks what was going on with her.

At the Club, Nick tells Dr. Anderson he needs her help. She’s pleased he reached out. Nick confides that Sage is obsessed with Sully. Anderson counsels that Sage is headed for a breakdown and might hurt herself. “I think you should have Sage committed.”

At the penthouse, Abby and Summer want to be part of the fashion show. Chelsea says they already have models. They won’t take ‘no’ for an answer. Marisa arrives, reporting for duty. Abby and Summer leave the room to get ready. Marisa notices Chelsea’s nervousness. She fills Chelsea in on her link to Adam’s kidnapping; Victor abducted her. Chelsea apologizes and fills her in on the exchange. They debate whether to tell Summer and Abby. Marisa thinks it’s a bad idea, but when they return, Chelsea lets them in on it. They assure her and Marisa they won’t act rattled; everything will go fine.

At Newman Enterprises, Natalie complains to Victor about being offered up as bait and rushes out. “I’m going to be sick!” At the office door, Nikki asks, “Who was that girl?” Victor lies that she’s probably involved in the fashion show. Nikki wants to know what’s really going on. He’s shocked she could pry herself away from her good friend Neil. Nikki storms off. At the Top of the Tower, Jack and Phyllis discuss the strangeness of Chelsea having a fashion show when her husband’s kidnapped. They spot Lily, who will be modeling in the show. Talk turns to Billy as Nikki appears. Jack fills Nikki in on Adam’s disappearance. She’s stunned. In Victor’s office, he watches Paul and Dylan reassure Natalie, who’s in a wedding dress. They tell her Kevin will monitor her tracking device. They all head out except Natalie, who stays with Victor’s guard. Later, she’s joined by Chelsea and the other models. Dylan comes to tell them it’s show time. Upstairs, Victor is peeved that Nikki knows about Adam. Chelsea begins the event. When Natalie takes the stage, Adam’s captor brings him in through a side door, gun to his back. Natalie and Adam change places, and Paul, Dylan and other cops rush to follow Natalie and her captor. Chelsea rushes into Adam’s arms, and Victor gripes at Abby and Summer for putting themselves in danger. Jack and Victor then check in with Adam, as Phyllis rushes off. Jack wonders where she went. Adam, meanwhile, tells Paul and Victor he was kidnapped by a woman. In the corridor, Natalie takes her captor down with a self-defense move and Dylan grabs him as she flees. Dylan calls Kevin, and they realize Natalie ditched the tracker.

In her suite, Natalie prepares her things to leave. Phyllis appears. “You vanished on me once already. That’s not going to happen again.”

Nikki tells Victor, “I hope she is far away and has taken her drama with her.”

Natalie asks Phyllis, “You want me to work for you?” Phyllis replies, “With me.”