Y&R Day Ahead Recap: Billy’s loved ones gather to say their farewells

Summary for Wednesday January 13 2015: Jill lashes out at Jack, Noah drowns his sorrows, and Kevin makes a deal. 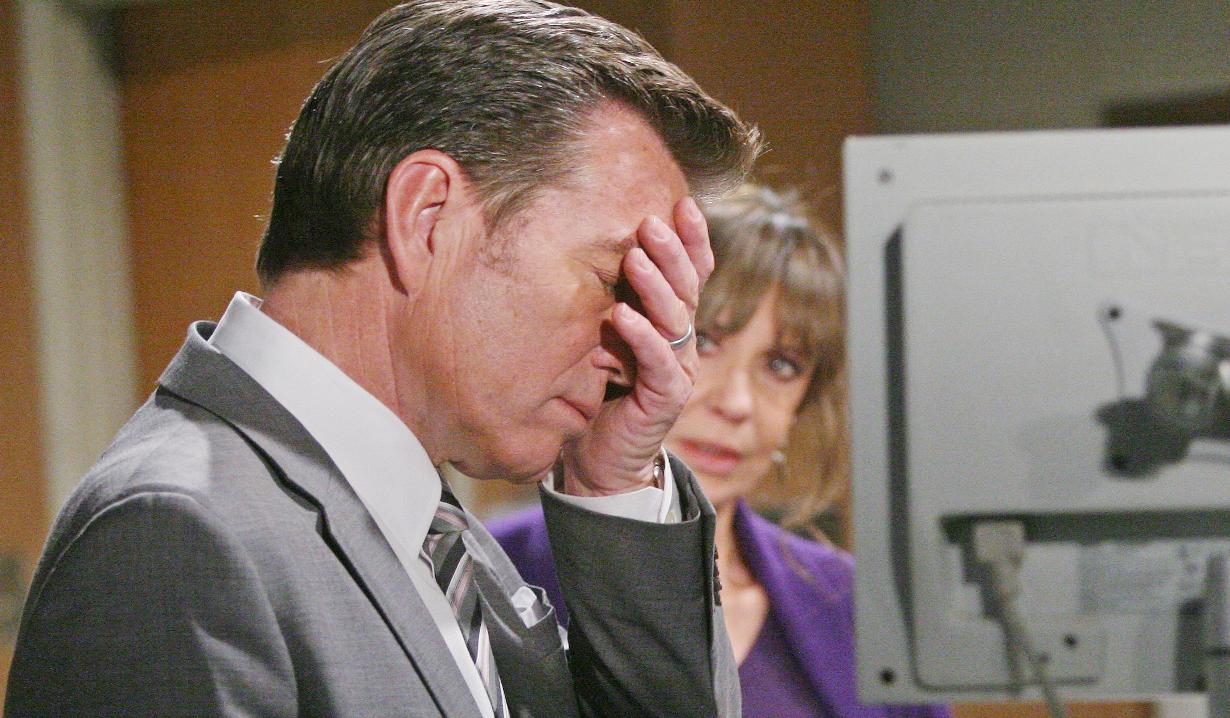 At the hospital, Jill hisses at Jack that she will take him to court and fight him with everything she has. “You will not kill my son.” Phyllis defends Jack, and Victoria takes Jill away. Jack tells Victor he knows he made the right decision. Traci arrives – they’ll get through this as a family.

At the Club, Neil warns Nikki continuing their fake affair could be dangerous. Nikki wants to share more with Victor before it’s too late – it may be the only way she can get through to him.

At Newman, Abby tells Marisa and Chelsea that Ben’s staying at the Club with his son. She mentions the heartless person that ran Billy down. Marisa glances at Luca. In Victor’s office, Adam wants Noah to focus on the plan to oust Luca and the Santoris and suggests he deal with whatever is bothering him. Noah quizzes Adam about living with himself after he realized he’d run down Delia. Adam is advising him when Luca enters. Noah exits, and Adam tells Luca he can put Marco on the phone – for a price. Luca gets a call and learns Marco was killed a few nights ago. Adam is skeptical and denies Victor would have done it. Meanwhile, Noah and Marisa exchange a look when Chelsea opines that they need to find the person who hit Delia. Abby gets a call from Jack that they’re turning off the machines. She announces, “They’re letting Billy go,” and leaves. Chelsea tells Adam and Noah tears up. Chelsea takes a call from Victoria and agrees to pick up the kids.

At the Top of the Tower, Kevin tells Mariah he turned down both Jack and Victor. She suggests he go back to Jack, but Kevin feels he has more important things on his mind today. Noah and Marisa appear with the news about Billy. Noah orders tequila and tells the bartender to keep them coming. After, Marisa and Noah rehash the cover-up. Luca enters and pulls Marisa away to tell her Marco’s dead. He has no way of tying his father to criminal activities now. Marisa warns him not to use what he knows about Noah. At the bar, Mariah cuts Noah off and grills him about arriving with Marisa. He says everything’s changed.

At the hospital, Jill tries to get Victoria onside to stop Jack. They sob and embrace. Abby and Ashley meet up with Victor and Traci nearby. Abby, Ashley, and Traci go for air, and Nikki appears with Neil, who goes to find Jack. Jack thanks Neil for his support, and Ashley returns. Jill appears. She knows Jack is doing what he thinks Billy would have wanted. Jack decides they must gather to say goodbye. In the waiting area, Chelsea and Adam arrive with the kids. Chelsea takes them to find Victoria, and Victor informs Adam he must go to Spain tonight to meet with a contact that has dirt on the Santoris. Everyone takes turns saying their goodbyes to Billy. Ashley, Abby, Traci, Kevin, Phyllis, and Jill all pour their hearts out to him. Chelsea and Adam tell Billy he’s a good man, and Adam breaks the news to Chelsea that he’s going out of town. Outside, Neil tells Victor he’ll see Nikki home. Victor grunts and walks off. Nikki thanks Neil. Jack and Nikki exchange a look as Victoria enters Billy’s room with Katie and Johnny. Inside, Victoria prompts the children to tell their sleeping daddy ‘sweet dreams’. Finally, Jack goes in. He nods and the nurse shuts off the machines. “Be at peace, Billy.”

At Newman, Kevin tells Victor he is ready to make a deal. They shake on it.

At the penthouse, Chelsea has a bad feeling about Adam leaving. He reassures her and exits. As he’s about to board the elevator, he notices someone approaching him but doesn’t appear alarmed. In the apartment, Chelsea hears a loud thump. “Adam?” She opens the door as the elevator door closes with Adam inside with his hands up in surrender and a black bag over his head.

Kevin tells Mariah he went right from Billy’s bedside to Victor’s office. She says, “You closed the deal with Victor.”

Noah says to Victor, “I have to, Billy’s going to die.” Victor asks, “How will that help Victoria, Noah?”

Jack says to Phyllis and Jill, “He won’t be with us much longer will he?”