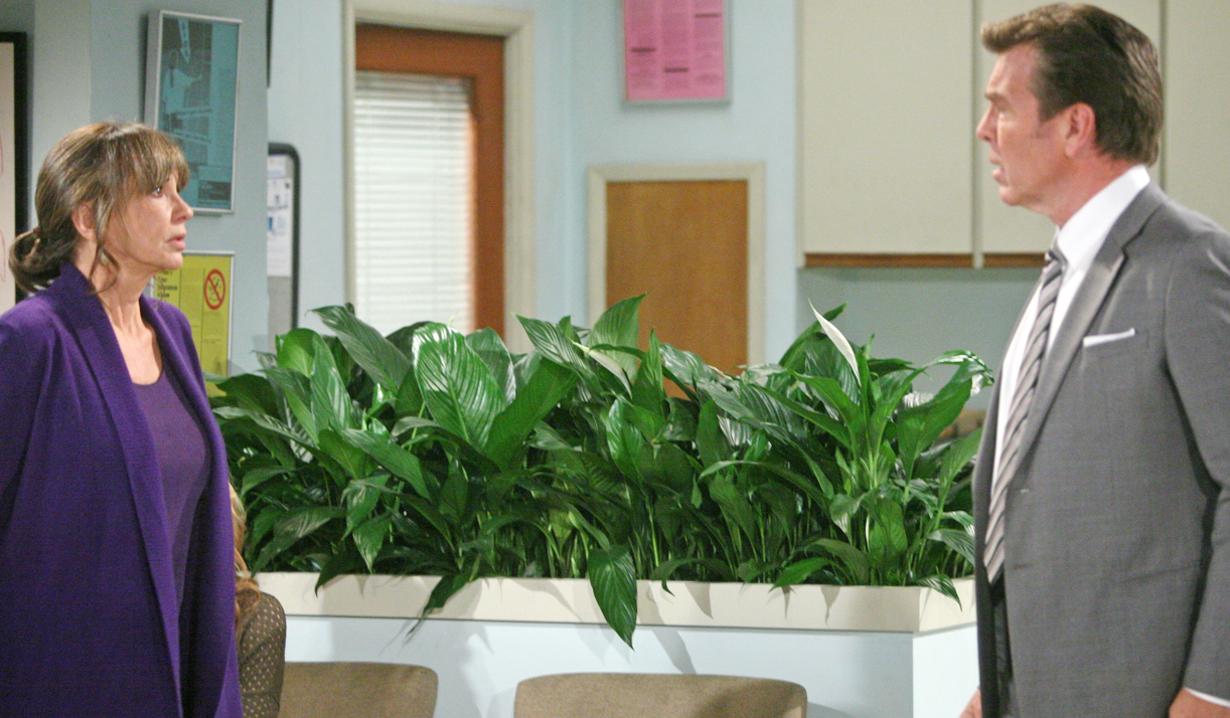 At the hospital, Phyllis learns that Billy gave Jack his power of attorney. She wonders what it will do to him. In Billy’s room, Jack tells Jill he doesn’t have faith in Dr. Neville. She reminds him Phyllis came back because of an experimental treatment and asks Jack not to let Billy die – it will be his decision. Jack joins Michael in the hall and gets up to speed on Billy’s will. He tells Phyllis he doesn’t want this and asks Victoria what she wants him to do. Victoria says Billy wouldn’t want to live on machines. They debate about experimental treatments. Jack asks to be alone. In Billy’s room, Jill wonders to Lauren why he didn’t trust her to have his power of attorney; she loves him more than anyone else does. Lauren says that’s why Billy didn’t name her – he wanted to spare her. Next, Phyllis gives her friend Billy a talk about coming back. Victoria tells Billy she hates him for this situation. He makes loving him so hard. She is tearfully ordering him to wake up when Jill returns. They embrace. In the waiting area, Jack is visited by John’s ghost, who urges him to make his decision from love. If Jack decides to let him go, he’ll show him the way.

At the Club, Lily wants to know where she and Cane stand. Cane isn’t interested in reconciliation, though they had a nice time at Christmas. Nearby, Victor asks Nikki if she’s having an affair with Neil Winters. Nikki rants that she and Neil are friends, and Victor’s always too busy for her. Victor protests that what he’s doing at Newman is for his family. Nikki complains about him trying to get a business deal out of Victoria’s grief. He yells at her about renting a suite with another man and takes off.

At the Jabot lab, Devon stumbles upon Neil and Hilary having sex and leaves quickly. After, Neil tells Hilary it shouldn’t have happened. Hilary thinks he wanted it to happen. She’s frustrated he’s fighting this; she’s never going back to Devon. Neil pretends he wants Nikki. Hilary says that isn’t real; what they have is real. Neil can’t be with her.

Lily and Cane spot Devon downing drinks at the bar. He hollers that Neil is having sex with Hilary in the lab right now! Lily tries to defend Neil, but Devon’s says it sure feels like payback to him. He tells Lily she has no idea what Neil’s capable of. Lily takes off to talk to somebody. Neil arrives and Cane holds Devon as he confronts him. Neil insists it wasn’t payback. Devon disowns him as a father. Neil wants Cane to go after Devon. Nikki appears. He confesses he slept with Hilary, but regrets giving in to those feelings. Nikki shares that their faux affair made Victor jealous. She says it felt good, and wants to keep the phony affair going. At a table, Cane and Devon discuss their relationships. Devon still thinks Hilary’s his soulmate – he won’t give up. Cane looks thoughtful.

At the Jabot lab, Lily tells Hilary she thought she’d changed, but she’s the same bitch she always was. Hilary wants to know how she found out she slept with Neil. Lily says Devon saw them. Hilary protests that she loves Neil and has been clear with Devon. Lily accuses her of destroying Neil and Devon’s relationship. Does she even know what love means? Hilary suggests she go fix her own marriage. Lily wishes Hilary were still at the bottom of that cliff.

At the hospital, Jack can’t deal with Victor, who says he’s not there to fight and is truly sorry. He knows Jack will make the right decision. Phyllis, Jill, and Victoria join them. Jack speaks about his love for Billy. He trusted him to respect his wishes, so that’s what he’ll do – he’ll tell the doctors to take him off the machines and let him be free. Jill looks crushed.

Victor tells Adam, “I want you to go to Spain, tonight.”

Jill tells Jack, “I”ll take you to court, I’ll fight you with everything I have. You will not kill my son.”

Y&R Day Ahead Recap: After seeing...