Summary for Friday January 8 2015: The search for Max continues, Billy’s loved ones cope with bad news, and Luca turns to Adam for help. 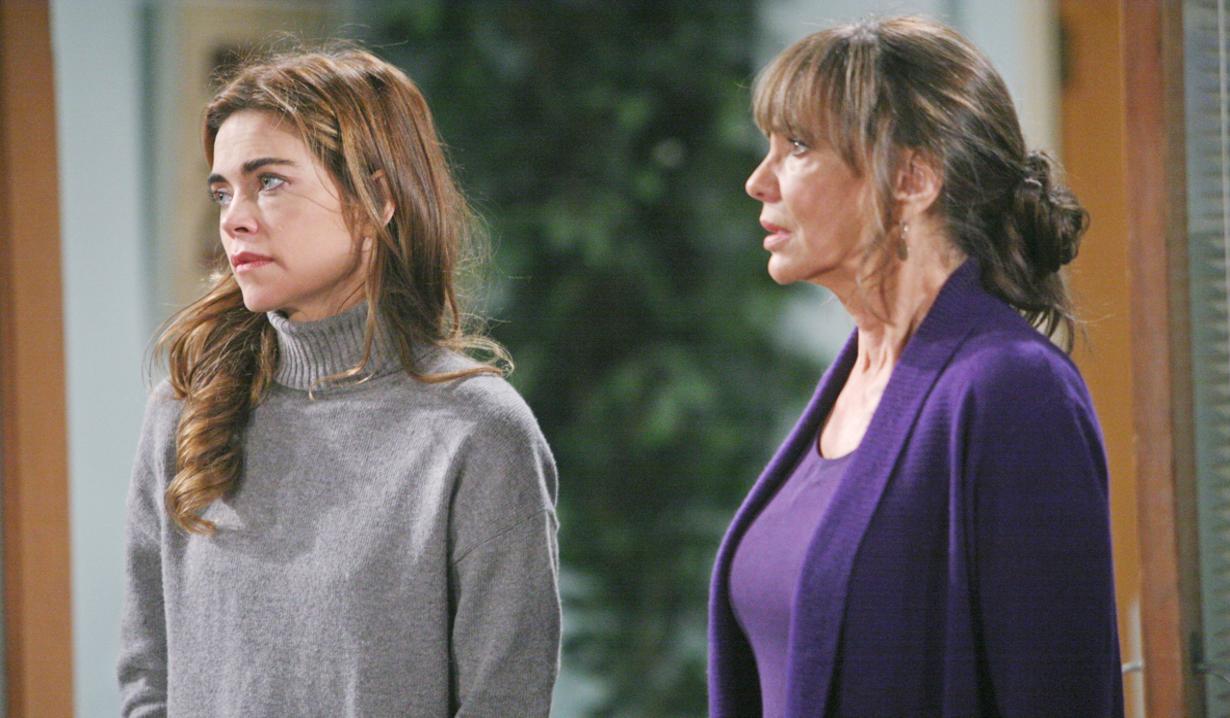 At the Club, Stitch and Abby frantically search for his son Max, who is nowhere to be found.

At the police station, Paul and Dylan theorize that the driver who hit Billy might be afraid to come forward, or has covered their tracks, which makes them not so innocent. Paul wonders if maybe they were too preoccupied to notice – like newlyweds on the way to their honeymoon. Dylan can’t believe Abby and Stitch hit him. Paul learns they were in a limo. Just then, Paul gets a call from Abby that Max ran away.

At the Club, Paul and Dylan try to calm Abby. Stitch comes in from checking outside. Abby whines about failing as a stepmom. Stitch blames himself for his son running from him.

At the hospital, Jill learns that Billy has very little brain activity. The doctor says they just have to wait and hope. He leaves and Victoria wonders if maybe Dr. Neville was the answer after all. Jill laments going home to rest.

At Crimson Lights, Jack asks Kevin who the other interested investor is. Victor appears. “Well, Jack, that would be me.” He says Phyllis mentioned the project and he sought out Kevin. Jack rants about Victor sniffing for opportunity while Billy fights for his life. They argue. Victor makes his pitch to Kevin. Jack reminds Kevin how much it meant to Billy. Victor says Jack is responsible for Billy’s hopes and dreams being dashed. Kevin, frustrated, tells them both to go home. They both keep lobbying to fund the venture until Jack takes a call from Phyllis telling him he needs to get to the hospital. Jack goes. Kevin tells Victor he can give him the death stare all he wants – he won’t change his mind. Victor works on Kevin, but he refuses to budge. Victor urges Kevin not to disappoint him and leaves. Kevin takes a call from Paul to check the surveillance footage around the Club. Max enters the coffee shop. Kevin tells Paul.

At the Club, Stitch tells Abby he will go retrieve Max on his own. Abby is affronted, but Stitch reassures her. After, Abby tells Dylan her concerns about her marriage considering this new development. Dylan tries to make her feel better.

At Crimson Lights, Kevin gets Max playing a video game until Stitch arrives. Max tells Stitch he doesn’t want to live with him; he wants his mom and wants to go home. Stitch says home is people that love you. Max supposes he could give them a chance.

At Newman Enterprises, Noah and Marisa learn that Adam has no new word on Billy. Luca looks on as Marisa reassures Noah in a whisper. Adam sends Noah and Marisa out and tells Luca to drop the jealousy and focus on their plan. Luca reassures him. Adam wants to know what he has on his father. Luca says he has some leads but needs Adam’s help with Marco Anicelli. He wants Adam to find out where Victor stashed him. Adam says he’ll find him, but warns he’s a wild card. In the corridor, Victor reiterates to Noah that he should keep quiet. He tells Marisa to talk sense into his grandson and then joins Luca and Adam. Luca exits, but listens at the door as Adam asks Victor where Marco is. When Victor tells Adam he’ll give him the information he needs, Luca walks away. He takes Marisa to dinner. In Victor’s office, he hands Adam a paper. “This is Marco’s location, you give it to Luca.” Adam realizes they’re giving Luca rope to hang himself. Victor says that peacock will go up in flames before he realizes Adam’s a double-agent.

At the Top of the Tower, Luca confronts Marisa about covering up Noah’s crime. Marisa explains the circumstances and then realizes he duped her – he hadn’t known anything. Luca feels he should go to the authorities. Marisa warns if he does, he’ll lose her for good.

At the hospital, Jack joins Jill, Victoria, and Phyllis. He has spoken to the doctor and tells Jill they have to talk – there may be difficult decisions to make. Jill hollers that she will never give up on her son. Never! Jack says Billy wouldn’t want to live in limbo. Jill accuses him of building a case for taking him off the machines. Jack insists it’s the last conversation he wants to be having. Victoria interrupts to say that Billy already made the decision a couple of years ago – he wouldn’t want to live like that. Jill takes offense and mentions Jack not giving up on Phyllis. Jack decides it’s a moot conversation, but the doctor appears and tells them Billy has deteriorated and might have to be taken off life-support. He warns Billy is all bandaged up. They all file in to see him. Jill takes Billy’s hand. “Oh my sweet baby,” she gasps. After, alone, Victoria tells Billy if he loves her he’ll wake up. Noah appears and looks in at them.

Kevin says to Victor, “You asked what I want to become.” Victor nods. Kevin says, “A man who can say no to Victor Newman.”

Nikki tells Hilary, “I saw you with Devon when the clock struck twelve.” Hilary responds, “I saw you too…with Neil.”

Jill says to Neville, “Please come with me to the hospital and heal my son.” Neville tells her, “There’s no point.”

Y&R Day Ahead Recap: After seeing...