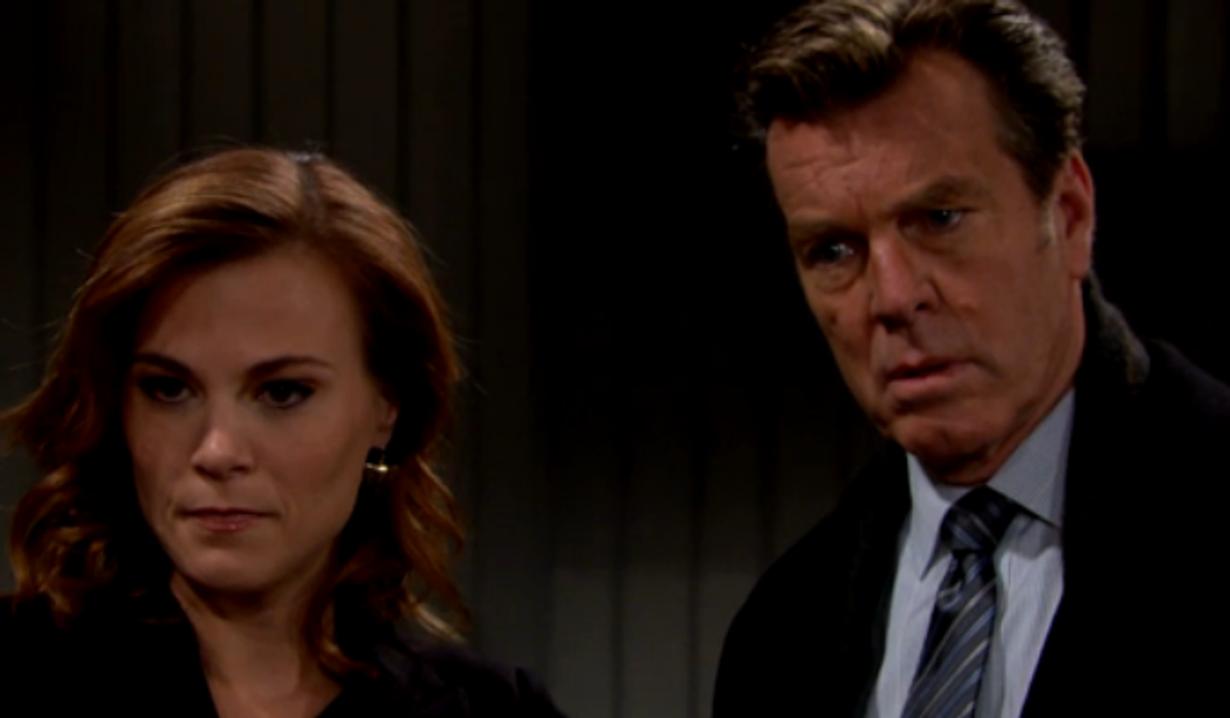 At the hospital, Dr. Neville is trying to convince Billy’s surgeon that surgery is a bad idea. Ashley tells Victoria they should listen. Neville says Billy is the perfect candidate for his protocol, and admits familiarized himself with his chart. The doctor notes Neville’s unethical behavior and urges them not to risk Billy’s life. Abby and Ben appear as Ashley insists they should hear Neville out. The debate continues. It’s decided that Ben will talk to both doctors and then bring it to the family. As Abby supports Victoria, the doctors try to convince Ben. Neville mentions Ashley. Ben sides with the surgeon, but asks Neville what he meant about Ashley. Neville covers. Meanwhile, Abby questions Ashley about her fainting spell. Ash insists it was just low blood pressure. They hug and Ben watches. He informs them he decided against Neville’s experimental treatment for Billy. Abby and Ben note Ashley’s strong belief in Neville. Ashley goes to find him.

At the Jabot lab, Neville expresses his frustration with the surgeons at the hospital. Ashley still hopes his methods will be proven with her. They decide to start her treatment immediately and embrace.

At the station, Kevin and Mariah listen from the door as Paul wonders to Jack and Phyllis why Billy placed such a huge bet – why was it so important for him to win big? They tell him he mentioned a project. Kevin comes forward – Billy was eager to be involved in his business venture. Jack muses he’d risk anything to earn his respect back. He tells Kevin he expects him to find out who drove the car, and he also wants to know about the venture. Kevin explains. He feels bad about rushing Billy for funding. Jack says he’s not the only one with regrets.

At the penthouse, Adam and Chelsea cuddle on the sofa and talk about Billy’s condition. Chelsea once again brings up trying for another baby. Later, Chelsea happily reads out a positive review on Abby’s wedding dress. Adam will help her revamp her line to include bridal wear. She worries they’re getting off track about baby-making, but Adam quickly says she should strike while the iron’s hot.

At Newman, Victor calls Noah into his office. Marisa joins them. “We’re all in this together.” Noah and Marisa tell Victor his tracks have been covered – they dealt with the offending tires. Noah steps out to take a call and Victor warns Marisa she’s playing a dangerous game by helping Noah behind Luca’s back. He promises if someone gets hurt it won’t be his grandson. In the corridor, Luca quizzes Noah about Marisa’s strange disappearances from their suite. Marisa emerges from Victor’s office. Noah takes off. Luca questions Marisa, who says Victor was just checking in. She reiterates that Luca shouldn’t trust Adam, as Adam and Chelsea appear. They go into Victor’s office and show him Chelsea’s good reviews. Chelsea asks to cut all ties with Newman. Victor chuckles. “That ain’t going to happen.” He outlines the benefits she gets from aligning with Newman. They bicker about Jabot and Billy. Chelsea says Victoria told her there is more to his story than the gambling. Outside, Luca wants Marisa’s help verifying his family’s illegal ties to Marco. She tells him Marco used an alias in his dealings with the Santoris. Later, Luca tells Adam he found a source to implicate his family – Marisa. Elsewhere, Chelsea tells Marisa she’s expanding. Noah appears. She invites them both to work with her. Noah declines, but Marisa’s in. After, Chelsea tells Adam she asked Marisa to work with her. He wants her to stay away from her. Chelsea wants to know what’s going on. He tells her to stay away from Marisa and Luca – they won’t be there long.

Jack and Phyllis arrive at the hospital and are glad to see Abby and Stitch. Jack worries about Billy’s survival and Phyllis is supportive. In Billy’s room, Victoria sits at his bedside. In the waiting area, Abby and Ben discuss Ashley supporting Neville. They wonder if there’s something going on besides business. Ben gets a call from Paul to come to the station. They leave as Victoria rejoins Jack and Phyllis. Victor appears, so Jack and Phyllis walk off. Victoria reminds Victor she asked him to stay away. “What’s the real reason you’re here, Dad?” Victor asks her about Billy’s venture. She realizes he wants to swoop in on the investment – it’s why he’s there. Outside Billy’s room, Jack tells Phyllis he’ll invest in Kevin’s project in Billy’s name.

At Crimson Lights, Mariah takes Kevin to task for talking about his project. Kevin realizes she’s right and agrees to wait for Billy – he’ll try to stall Natalie.

At the station, Stitch is stunned to see his son Max. Max blurts that his mom is dead. He looks at Abby. “You killed her!”

Victor tells Phyllis, “I don’t mind seeing you and your husband squirm a little.” She tells him to go to hell.

Sage tells Dr. Anderson, “You’re not my therapist, and you’re not my friend, so stay out of it!”

Kevin hands Mariah a turquoise jewelry-sized box with a bow. “I want you to have this. Happy Birthday, Mariah.” 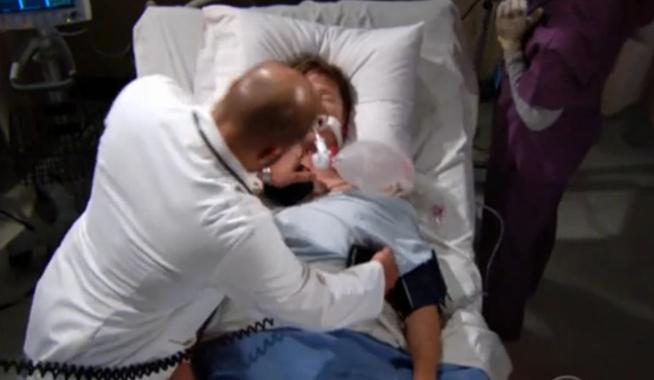 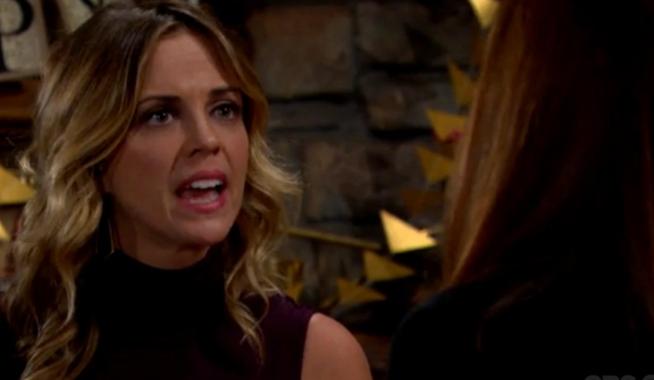