Y&R Day Ahead Recap: Billy is unable to make it to Abby and Ben’s wedding, and Ashley reveals her secret

Summary for Thursday December 31 2015: Abby and Ben’s wedding continues, Neville presses Ashley for answers, and Neil gets help from Nikki. 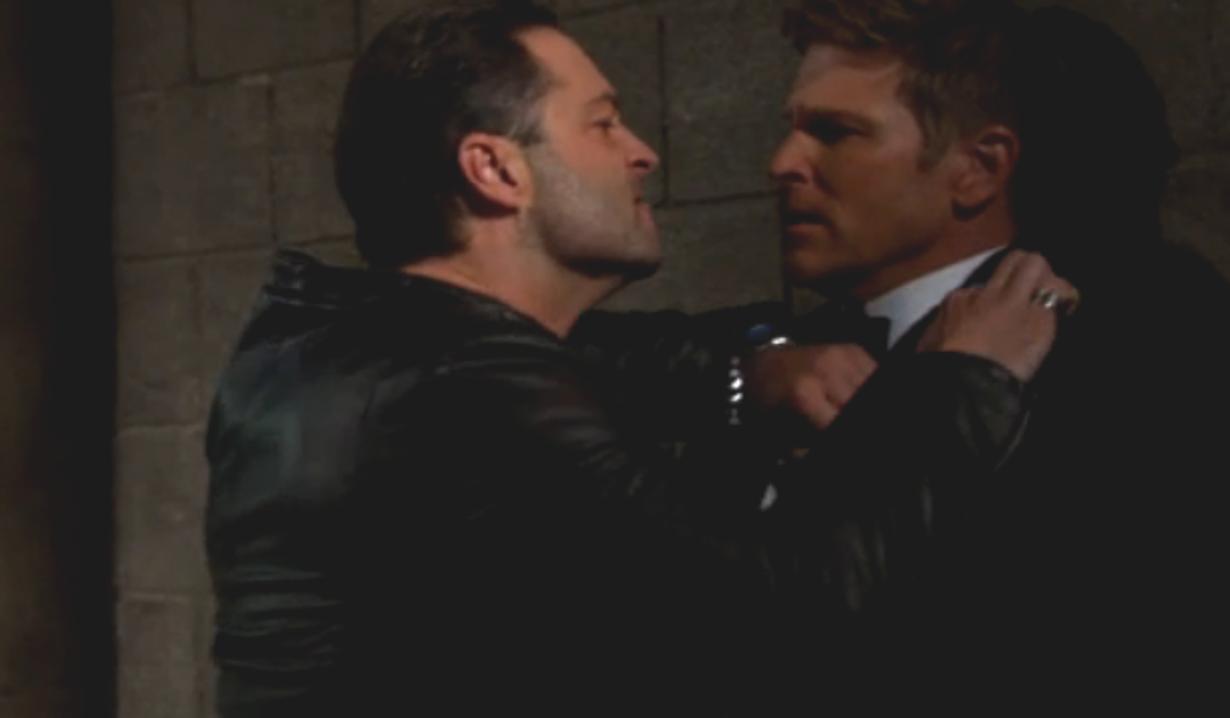 At the Top of the Tower, the wedding guests gasp as Ashley collapses. Ben rushes to her side. “Ash, it’s Ben. Can you hear me?” Ash comes around. “Ben?” Jack says an ambulance has been called. Ashley protests. Neville says the woman forgets to eat. Ash insists she’s fine and won’t leave until Abby and Ben say ‘I do’. In the parking garage, Billy tells Gil the bookie he has to get to a wedding, but Gil throws him up against the wall. “We’re doing this now!” Billy insists he’ll give him his money tomorrow, and tries to run, but another goon appears. In the tower, the wedding ceremony resumes. Abby and Stitch exchange personal vows; Abby jokes that Ben once referred to her as ‘high maintenance’ and ‘spoiled’, and Nick yells out, “Nailed it!” Everyone laughs. Stitch tears up the vows he wrote and goes the spontaneous and heartfelt route. They are pronounced husband and wife. Once the reception is underway, Ben wants Abby to leave, but Traci implores them to stay a little longer. Victor makes a speech about marriage with Nikki by his side. Everyone toasts to the happy couple. Later, Dylan makes a speech about Stitch being a hero, and Victoria speaks about love, but gets too emotional to continue. Chelsea saves her and another toast is held. In the parking garage, Billy’s been beaten up. Gil gives his goon trouble. “I told you, not the face.” Billy slumps against a wall with blood on his mouth. Upstairs, Ben and Abby have their first dance. Neville sits with Ashley and asks her for the truth about her condition. She gets up and leaves the table. Across the room, Adam and Sage talk about their relationships with Nick and Chelsea going good. Ashley dances with Ben, who tries to talk her into getting tests at the hospital. She reminds him it’s his wedding. After, Ben and Abby sneak out. In the parking garage, Ben and Abby pause for a kiss but don’t see Billy, who is unconscious behind a car. Upstairs, Neville tries again to get Ashley to come clean. She tells him he can’t help her and takes off. Sharon and Dylan also decide to go home. Sage sees, and observes to Nick that they have a lot to get home to. Victor joins them and seems pleased to hear that Nick and Faith moved into the penthouse. Adam and Luca watch Victor and confirm their plan is still on. At their table, Devon and Hilary clink glasses to the year ahead. Neil and Nikki watch. He tells Nikki he wishes Hil would stop thinking he could be her man. He thinks Nikki could help make that happen. Nearby, Jack tells Victoria that Billy left because they argued. She’s dismayed to hear he’s been gambling again, and leaves. Phyllis takes Jack to task for hanging Billy out to dry – Victoria wanted to forgive him. Jack is more worried about Ashley.

At the Jabot lab, Ashley cries and trashes the research. “It’s all useless!” Neville appears and says the research wasn’t useless – it helped Hilary and could help her. He wants to know what’s wrong with her; there could be a cure. Ash says, “Not for me.” She tells him about her prior aneurysm and its return. Ash talks about wanting Abby to be married and settled before anything happens to ruin it. Neville can’t believe she isn’t planning to fight to live. He tries to convince her to let him work to find a cure. Ash doesn’t want to get her hopes up. Neville doesn’t want anyone in his lab who’s not up for a challenge. Ash says she’s in, but swears him to secrecy.

At their place, Stitch helps Abby out of her dress and says they still have time before their flight. They make love. After, they scramble to dress for their flight but stop to wish each other a Happy New Year.

At home, Dylan tells Sharon, in bed, that 2016 is going to be their year. They do their own countdown.

At the Top of the Tower, everyone yells, “Happy New Year!” Victor kisses Nikki and tells her he’ll be back soon, Chelsea and Adam kiss, Sage tells Nick, “To the New Year.” He replies, “To us.” In the corner, Mariah says, “What the hell,” and kisses Kevin. Phyllis tells Jack he makes her crazy, but they kiss. Michael smooches Traci, Summer, and Victoria. Noah walks away as Marisa kisses Luca. Hilary tells Devon she hopes the New Year treats him right, and then turns to see Neil kissing Nikki! Neil tells Hilary he had to move on with his life and wishes her a Happy New Year. Devon confronts Neil. “I know what you’re doing.” Devon admits he doesn’t want Neil to stop. In the parking garage, Billy wakes up coughing. He inches forward and reaches up toward the back of a car but collapses. Noah enters the garage, gets into the car, and inadvertently puts it in reverse. He backs up a bit, corrects himself, and drives off. Marisa appears calling his name. She spots Billy and calls an ambulance.

CBS will air a previously-viewed episode of “Y&R.”

Y&R Day Ahead Recap: A shocking...