Summary for Wednesday December 30 2015: Billy’s troubles worsen, Luca and Marisa wangle an invitation to the wedding, and Kevin worries about funding. 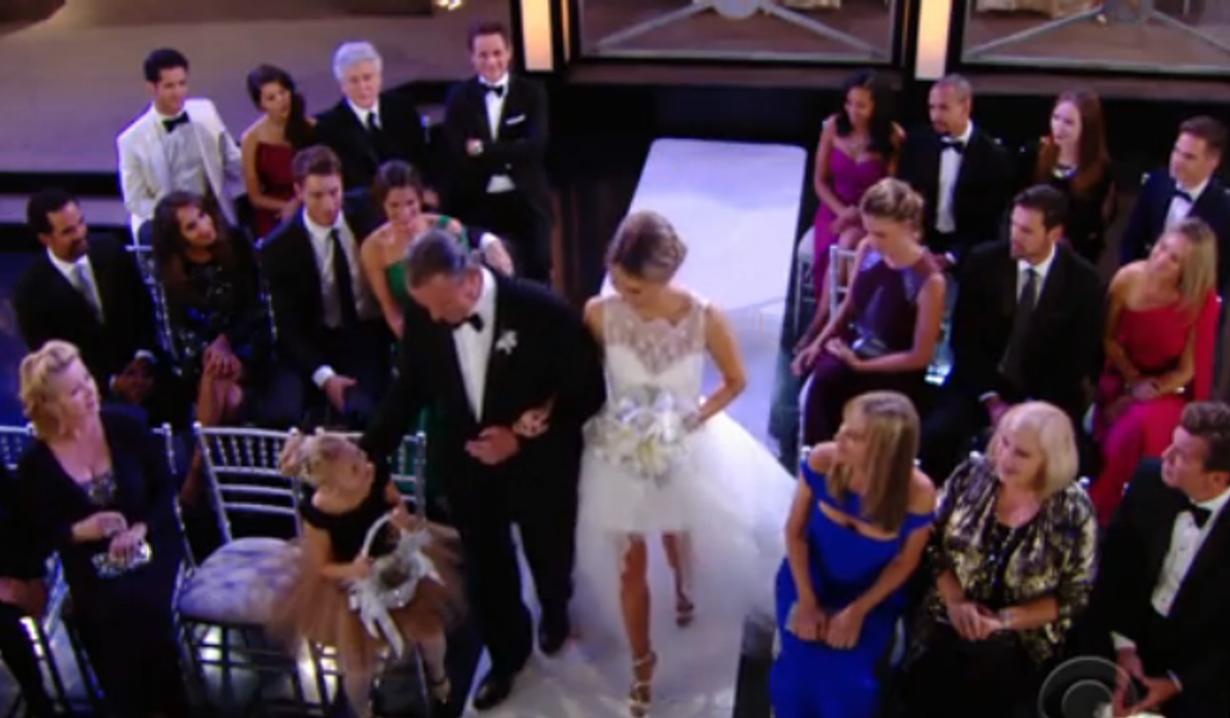 In a suite at the Club, Traci, Chelsea, Summer, Nikki and Victoria admire Abby, who can’t believe it’s her wedding day. Summer and Nikki discuss Kyle being ill. Abby says she contacted Jenna hoping she would change her mind, but she didn’t get back to her. In another suite, Luca tells Marisa they are going to Abby Newman’s wedding. She says they weren’t invited. He says they will be – by Adam. He confides they’re working on a project together. Marisa warns Luca to be careful. Down at the bar, Phyllis tells Billy that booze won’t help anything. He laments about his losing horse, and says he knows he screwed up. He gets a call from his bookie and Phyllis is apoplectic. “You bet money you don’t have?” Jack appears. Billy deflects Jack’s questions and says he’ll see them at the wedding. Jack asks Phyllis what’s going on. She says Billy is involved with a venture but isn’t ready to bring Jack in on it.

At the Jabot lab, Neil learns that Ashley asked Neville to accompany her to Abby’s wedding. Neville leaves, and Hilary assures Neil he’s harmless. She asks him for a lift and notices his discomfort.

In the Top of the Tower, Dylan wants to make sure Stitch isn’t having any second thoughts. Ashley appears. Dylan says she looks…wow. Stitch gazes at her, and thanks her for helping plan the wedding. She steps away. Stitch assures Dylan that he’s not having second thoughts; he just wishes Max could be there. Down in Victor’s office, Adam excuses himself – he’ll see them at the wedding. Noah thinks Adam’s up to something. Victor tells Noah not to worry about Adam, and to focus on the Santoris. Upstairs, Mariah, Kevin, Nick, Sage, and Sharon chat with Faith, who misses Sully since moving into Sage’s place. Sage will drive her to the ranch soon. Michael and Lauren arrive and kiss a lot. Nearby, Dylan and Lily discuss Cane being sick, and talk about the holidays. Lily hopes it meant something to Cane as it did to her. Devon hopes things will be better in the New Year now that he and Hilary are friends. Meanwhile, Neville arrives and Stitch admits he’s surprised Ashley asked him to be her date. Neville senses animosity. Stitch warns her not to drag Ashley down in the muck with him. Across the room, Nick tells Dylan things are better with Sage. By the door, Billy breaks the news to Kevin that he doesn’t have the money yet. Kevin is upset and warns him he’ll find another investor if he doesn’t get it soon. Neil and Hilary enter the room. Hil clarifies to Devon and Lily that Neil just gave her a ride. They congratulate Stitch, and Devon gazes at Hilary.

At the Club, Jack notices Ashley walk in. He follows her to a suite door and chats about the changes in her life. Ash says she nearly died, and today is about Abby. She enters the suite and joins Abby and the others. Adam shows up and asks Abby to put Luca and Marisa on the guest list. The women all think it’s a bad idea. Adam insists he’s just trying to show Luca good faith. Nikki decides it makes sense. Abby agrees. After, the women give Abby something old, something new, something borrowed, and something blue. Ashley gives Abby a handkerchief of John’s and they embrace. Ash and Nikki talk about being able to celebrate Abby’s wedding together. Ash tells Abby she’s proud, and that Ben will take care of her, before leaving with Traci and Nikki. Abby hugs Summer, Victoria, and Chelsea – it’s time to get in her dress.

Jack arrives at the Top of the Tower, and Billy asks him for a 2.2 million dollar loan. Jack can’t unfreeze his accounts or loan him the funds. He realizes Billy lost what he had on a bet and refuses to help without more information. Phyllis appears as Billy says he can’t deal with any of them and takes off. Nearby, Stitch tells Victor he will give Abby the life she deserves. Across the way, Nick and Sage question Noah about working at Newman with Marisa. Noah reassures them he can handle it. Luca and Marisa appear. Noah and Adam join them as Victor tells them to get out of there. Adam explains that it’s a show of good faith, and Noah and Nikki support him. At the bar, Luca and Adam chew about their fathers humiliating them. Meanwhile, Noah tells Marisa he loves her and will be waiting when she sees Luca for who he is. As Lauren tells Ashley she has to go, Neville joins Ashley, who thanks him for agreeing to be her escort. Dylan announces it’s time. “Everyone take your places.” Neil sits with Lily, leaving Hilary to sit with Devon. Dylan, Ashley, Victoria, and Faith proceed up the aisle. Kevin glances at his phone – Natalie asks if he has the money. In the parking garage, Billy’s bookie corners him. “It’s time to pay.” Upstairs, the wedding march begins and Victor accompanies Abby up the aisle. As the ceremony begins, Ashley collapses and falls from her chair onto the floor.

Victoria tells Jack, “He did mention he had some irons in the fire.” Jack replies, “Those irons are probably horses that didn’t win.”

The bookie pushes Billy up against the wall. “We’re doing this now!”