Y&R Day Ahead Recap: Abby and Stitch are surprised to find Billy with Victoria

Summary for Monday December 28 2015: Dr. Anderson doles out more advice, Abby picks a dress, and Stitch is upset about his son. 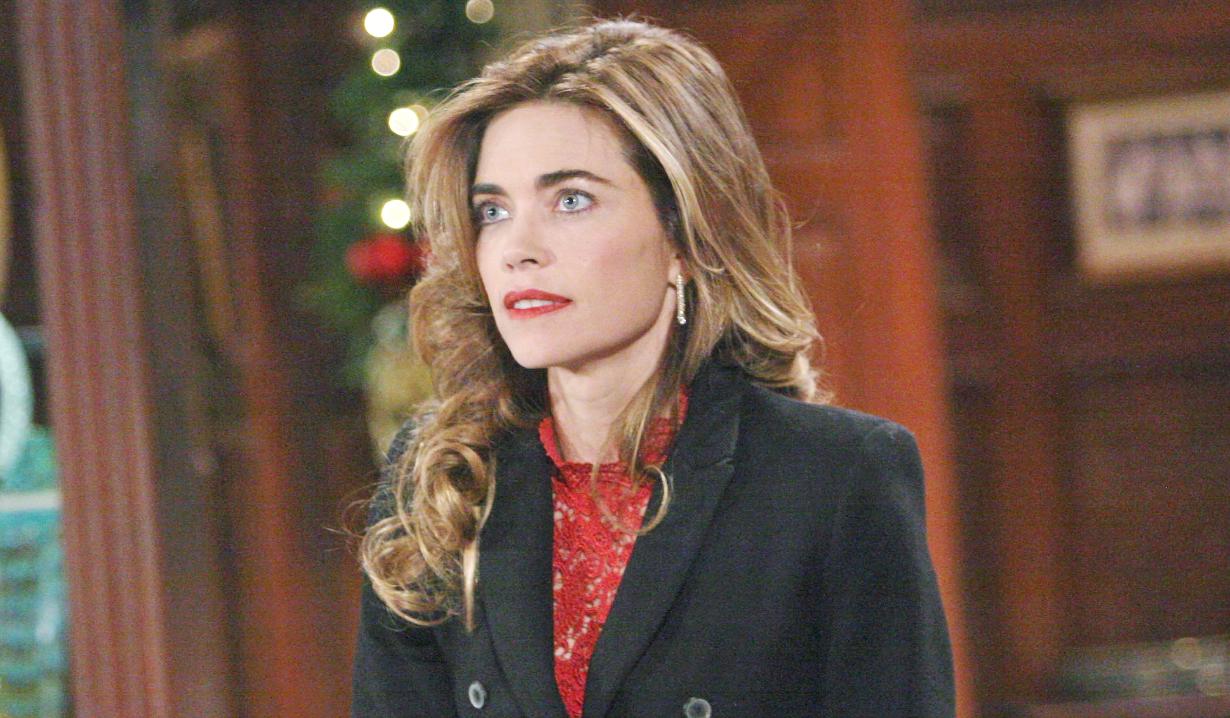 By the elevator at the penthouse, Adam questions Chelsea’s decision to design Abby’s wedding dress; she’ll be a Bridezilla. Chelsea wonders if he’s thought about her idea to have another baby. He says that it’s a big decision. Chelsea leaves and Adam spots Sage and Nick kissing passionately at her door. They notice Adam and they chat. Adam tells them about Faith convincing Victor to come to the party. Nick is surprised to learn that Noah’s back at Newman. He kisses Sage and leaves. Adam tells Sage she can now be honest about how awful her time with the insensitive Nick was. He goes on a rant about Christian and all the Christmases he’ll never have. Sage is stunned and tells him to stop. She wipes a tear away and opens up about the struggle to be okay.

At the Club, Stitch sees Billy with Victoria and warns him to walk away. Victoria tells him it’s okay. Billy apologizes to Stitch and Abby for the scene at The Underground. Stitch shakes his hand. Billy walks off and Abby and Stitch tease Victoria. Victoria explains how they came to be together. After, talk turns to Max. Abby thinks Jenna has torn Stitch apart to his son and that’s the problem. Stitch gets back on the phone and pleads with Jenna to work with him so Max can be at his wedding. Nearby, Abby meets with Chelsea and Victoria about the wedding dress. They discuss Jenna giving Stitch a hard time. Abby hopes she steps up – the wedding is her chance. Abby settles on the perfect dress. She can’t wait to start her life with Ben. Victoria hugs her.

At Crimson Lights, Mariah and Faith tell Dylan about their trip to the movies. He says Sully is with a sitter while Sharon talks to Dr. Anderson. On the patio, Sharon tells Anderson how great it was to share their Christmas joy with Nick and Sage. Anderson is taken aback to hear that they’re not spending time apart. When Sharon goes inside, Mariah tells Sharon she should be seeing someone different – Anderson is overstepping and has a cuckoo look in her eyes. Sharon thinks she’s suspicious because of her experience with Ian Ward. Mariah sticks to her opinion. On the patio, Nick appears and chats with Anderson about his Christmas. She warns him about Sage being around Sully – she could end up as her next patient if she suppresses her emotions. She advises him to stay away and give Sage space to grieve. Inside, Stitch arrives and chats with Dylan. He gets a call from Jenna, who says she won’t let Max come to his wedding. He tells her she’s being vindictive and she hangs up. Dylan sympathizes; he says if anything happened with him and Sharon, she wouldn’t keep him from his son. At a table, Sharon tells Nick that Noah is working at Newman because of Marisa. Nick talks to Faith about moving into Sage’s penthouse apartment. Nick assures her she’ll still get lots of time with Sully. After, Sharon and Dylan discuss Stitch’s situation and promise they would never keep Sully from one another.

At the station, Billy tries to talk Kevin into letting him in on his venture with the female hacker from Switzerland. Kevin doesn’t trust Billy to be in on his future. Billy insists he can deliver; he needs to prove he’s not a screw-up. Kevin admits the woman is no longer returning his phone calls or messages and drifts off. Mariah appears. Billy asks her about the female hacker.

At Newman Enterprises, Noah and Marisa have an awkward exchange. She admits she’s worried about them both working there. Noah tells her if she needs anything, he’s there. In Victor’s office, he and Luca disagree about expansion into South America. Victor says his is the only opinion that matters. Luca thinks he forgets who he’s talking to. Victor chuckles. Luca exits and Victor calls Noah in. They laugh about Luca the punk thinking he can tell Victor how to run his business. Victor will let Luca think he has some say for now so he can show off to his family and girlfriend. Noah pledges his loyalty to Victor, who warns him some sacrifices will have to be made. Noah wonders if Marisa will be one of them. Victor tells him to just remember his promise to do anything for the family. Later, Marisa tells Noah she can’t focus on work because she’s worried about him. She warns Luca’s family is dangerous. Noah understands what is at risk. Luca appears in the doorway. He rubs it in to Noah about being a happy husband.

Victor arrives at the penthouse and finds Adam with a tearful Sage. Victor makes some cryptic comments and Sage asks if he’s warning her away from both Adam and Nick. “I’m confused. Why?” Victor insists he wants her to be happy. She goes. Victor tells Adam they have a problem with Noah and the Santoris, and he needs to stop the handholding with Sage. Adam complains about Victor trying to control everything. Victor knows Adam’s secret about Christian and reminds him no one intimidates him.

Stitch returns to the Club and tells Abby he had no luck with Jenna. He won’t let it take away from their wedding day.

Phyllis tells Victoria, “The man that I married and fell in love with and planned a life with, was not the man I thought he was.”

Adam says to Luca, “What do you say we work together? Put ourselves at the top of the food chain?”