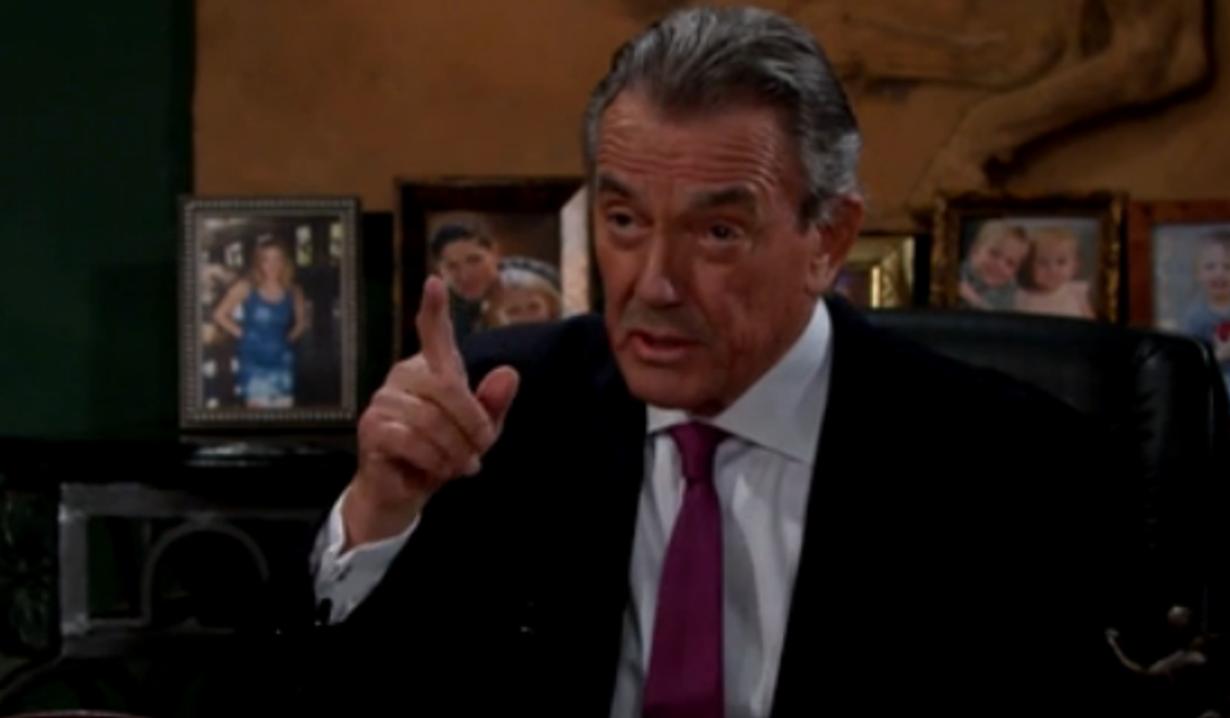 At Newman Enterprises, Abby reads a tabloid report about Billy’s antics to Victoria, who wants to focus on work. Abby urges her to let Billy spend Christmas with her and the kids. Noah enters. They question him about his working there. Noah says he wants to help Grandpa rebuild. Victor enters and tells them he’ll need them all there…today, tomorrow, every day until Newman is back on top. Abby questions why they’re not closing for the holiday and expresses dismay about how Victor handled things with Jabot. Victor offers to replace her. Abby says she was merely giving her opinion. Victor wonders where Adam is.

At the Abbott cabin, Phyllis tells Billy and Jack that no one is leaving there until they work things out. Jack recalls how Billy brought down the family. Billy decides he’s leaving. Phyllis reminds him he has no car, but he goes anyway. Phyllis talks to Jack about Billy. He complains that Billy wants everyone to be accountable except him – he wants a free pass. Phyllis asks if he’s willing to forgive his brother. Jack won’t cut him out of his life, but will cut off his funds. Phyllis urges him to give Billy his support – what if she had abandoned him when he hit bottom? Jack agrees to go out and find Billy. Later, Billy and Jack return, bickering. Billy wants a scotch. Jack complains he’s on self-destruct; he hasn’t seen him like this since Delia died. Billy says ever since Adam came back, all the anger, pain, and sorrow has come back. “I can’t do it.” Jack, concerned, asks if he’s thinking of leaving this life behind to join Delia. Billy assures him he wouldn’t do that; he has other kids to think about. Jack agrees – Katie and Johnny deserve better than this tension. Billy says Victoria can’t forgive him; even Jack won’t. Phyllis urges Jack to forgive him. Jack says he’ll have to prove himself and clean up his act. “Can you do it?” Billy will give it everything he’s got.

At the penthouse, Adam tells Chelsea he cleared his schedule to spend the day with her and Connor.

At Crimson Lights, Nikki greets Dylan, Sharon, and Faith. Faith is chagrined to hear from Nikki that they may not be able to get together for Christmas this year. Faith makes an appeal for the holiday to be special and Nikki agrees. She’s sure Victor will get on board. After, Chelsea, Adam, and Connor arrive. Sharon, who is holding Sully, gets a moment alone with Adam. They recall how close they once were and he admires the baby. Sharon remarks that he got a second chance with Chelsea and Connor. “What more could you ask for?” Adam looks at the baby and says, “Nothing.” Adam takes a call from Noah and tells Chelsea that Victor wants him at work. He tells Sharon it was good seeing her again, and leaves. Chelsea and Sharon discuss Adam working with Victor. Chelsea has faith that Adam’s made the right choice. Santa arrives. While Sharon takes photos of him with Faith and Connor, Chelsea chats with Dylan. They are happy they are in a better place after everything that happened. Both express regret about the past. Chelsea is glad he’s finally getting the happiness he deserves. Once alone, Sharon asks Dylan about his conversation with Chelsea. He fills her in and talks about forgiveness.

Nikki arrives at Newman and tells Victor he’s like Scrooge to make Abby, Victoria, and Noah work. The lights dim briefly. Nikki thinks it was a warning. Victor learns the construction crew is working on the wiring. He bickers with Nikki about Christmas – he plans to spend it rebuilding the company. Nikki wants him to let his children leave. She stalks out. Victor bangs on his desk. Later, Adam arrives and wonders why Victor’s alone. Victor grouses that Nikki insisted Victoria and Abby had better things to do, and Noah will soon be going. He tells Adam he can go too – he built the company himself and can do it again alone. Adam pretends to lecture him. “You’re running yourself into the ground, young man.” Victor chuckles, but then wants to get back to work. Chelsea and Connor stop in. Victor tells Connor that his daddy will go home with him. Once alone, Victor looks at the photos of his family members and then goes back to work.

At the Club after shopping, Nikki warns Victoria and Abby not to let Victor take over their lives. Abby feels bad they’re both having troubles with the men in their lives. They reassure her. Nikki says she won’t let Victor ruin Christmas, even if it means celebrating without him.

At the penthouse, Adam admits he would have stayed at work if Victor had asked him to. “Whether he wants to admit it or not, he needs me right now.”

Cane tells Lily, “I was thinking, you know, I should probably come over and stay the night.”

Dr. Neville approaches Ashley, who is holding her head, with concern as Gwen looks on. “Ashley? Are you all right?”

Victor hollers, “You’re no longer welcome at Newman Enterprises!” Luca says, “The Santoris have a deal.” Victor says, “I don’t give a damn about the Santoris, I’m talking about my grandson.” Noah frowns.