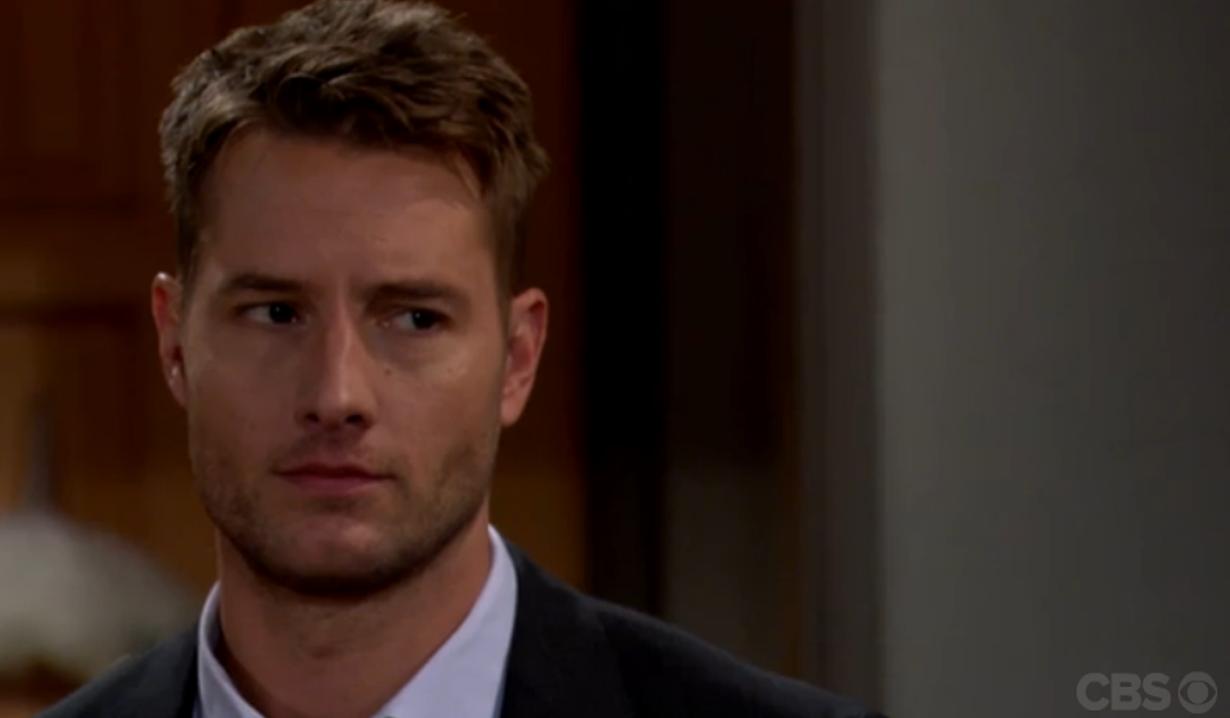 At the Club, Jack holds Billy by the lapels as Billy complains he’s let Victor walk all over them. Phyllis appears. She agrees with Billy. Jack is taken aback, and then angrily reminds them he’s been fighting with Victor for decades – he wants to negotiate peace. Billy complains about Jack covering for Adam and doing nothing after Paragon was launched. Phyllis says there’s a new threat – Victor’s suing Jabot. Jack rants anew at Billy’s screw-up and warns this could cost them their father’s company. Billy thinks John would be more proud of him for standing up for the family, than of Jack for being such a coward. Jack sniffs that Billy reignited a war between the two families. Billy offers to quit Jabot. Jack tells Billy to stay out of his way while he cleans up his mess. After, Billy tells Phyllis he doesn’t need Jack to protect him. He thinks Jack should take his advice and cut him loose.

At the penthouse, Chelsea asks Sage about Adam. He appears in the doorway as she lists his great qualities and admits to Chelsea that she fell in love with him. Adam asks, “You fell in love with me?” Sage clarifies that she loved Gabriel, the man he was pretending to be. “You have to believe me.” She decides she shouldn’t stay there. Adam offers her the apartment across the hall. Sage takes him up on the offer. Later, Chelsea remarks on Adam’s relationship with Sage. He asks if she’s jealous. Chelsea thinks there’s something else between them. “What is it you’re not telling me?” Adam admits he still feels like he owes her. The doorbell rings – it’s Jack. He tells Adam, “You’ve been saying you owe me; I’m here to collect.” Adam realizes he knows about the lawsuit. Jack wants Adam to tell Victor to drop it. Chelsea says he will, but Adam refuses; it was his idea. Adam says Victor wanted way more in the way of revenge; he convinced him to just take them to court. Adam says Victor doesn’t know he’s got a built-in exit strategy for Jack – all he has to do is cut Billy loose.

In Spain, Luca tells Marisa he has a private investigator trying to locate their daughter. She thought he knew where she was, and asks if he duped her to get her to go to Spain with him. Luca insists she’s there in Mallorca and promises they’ll be reunited soon. Luca talks about raising her together in Spain. She reminds him he said there would be no strings attached. After, Marisa listens as Luca gets an update on their daughter. He tells his man they won’t grab her. Marisa leaves.

In a park, Marisa sees her daughter. Luca appears and tries to stop her, but Marisa approaches the girl, who asks why she’s crying.

At The Underground, Noah updates Nick on Marisa leaving with Luca – he said some harsh things and plans to find her and bring her back. Nick thinks it would be a mistake – he should give her the time she needs. He says he is giving Sage the space she needs. Noah thinks that’s the worst possible thing he could do – it can come off like he doesn’t care. Nick says they can’t force their women to come home. Noah plans to fight for Marisa, and advises Nick to do the same. Later, Sage arrives and tells Nick she’s moving back into her old apartment across from Adam’s. Nick wonders why she can share her grief with Adam and not him. He tells her he wants to do this together. They embrace and then kiss.

At Crimson Lights, Kevin won’t tell Mariah what he’s up to with the female hacker. He’s excited about Natalie’s idea. He plans to broker a deal between her and the Abbotts or Newmans. Mariah wonders if he wants to get into her lederhosen. Kevin is only interested in her skills. Mariah is upset he won’t trust her to know the idea. Noah shows up and reminds Kevin he paid him to find Marisa’s daughter, and he didn’t do it. Kevin and Mariah are taken aback by his hostile attitude. Mariah suggests that Noah find out where Marisa and Luca went, and get more information about the child. Noah admits he insulted her and she’s not speaking to him. They discuss the situation and Nick’s viewpoint about giving women space. Mariah says it came from Dr. Anderson – she doesn’t trust her. Nearby, Kevin, on the computer, says he found out Marisa and Luca flew to Spain – there’s a school with a girl named Ava nearby. Noah is relieved – maybe Luca was telling the truth. Kevin isn’t so sure. “Look what else I found out.” Noah exclaims, “What the hell?”

Noah phones Marisa and tells her Luca has been lying to her. “Something about his story about Ava doesn’t add up.”

Chelsea asks Adam, “Do you really hate Billy that much, that you would try to turn his own brother against him?”

Ashley hollers, “Fifty million dollars to make this go away?” Victor says, “You add a zero to that.”