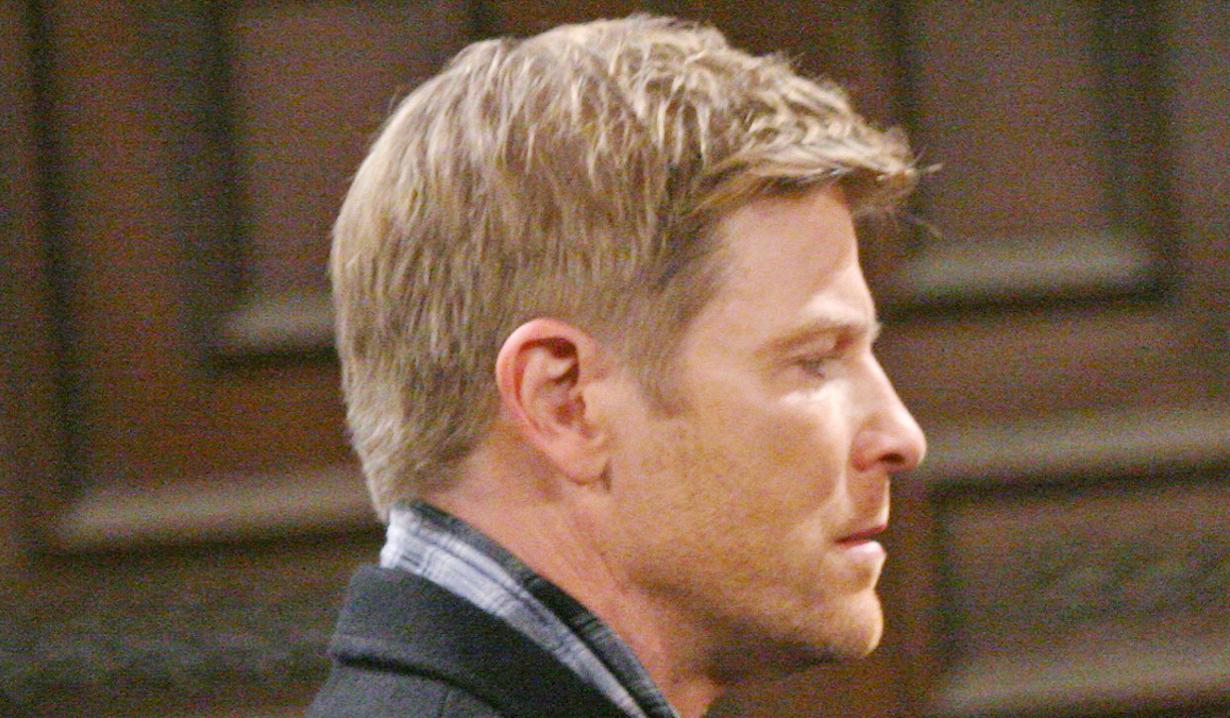 At the penthouse, Chelsea tells Connor they have Victor to thank for Adam being home. She worries about what he’ll have to do in return.

At Jabot, Ashley wonders what Victor is holding over Adam. Adam says, “Some deep dark secret, apparently.” Ashley says if he were on her side, she’d help him protect and deal with his secret. Adam is skeptical. Ashley agrees they won’t ever be best friends, but she won’t hold a sword over his neck like Victor. Adam tells her there is no secret. She tells him to give her a call if he decides to be honest.

At the church, Victor and Billy argue about the circumstances of Delia’s death. Billy tells Victor he should be worried about Adam, who won’t stop until he destroys him, and that’s something Billy can relate to. Noah appears. Victor exits. At the altar, Sage is mesmerized by the baby. Nick prompts her to hand him back to Sharon. Sage does so, and tearfully exits. Dylan reassures Sharon, who then shares a warm moment with Mariah. Meanwhile, Noah tells Nikki that Victor argued with Billy and then left. Paul arrives and admires the baby and Sharon. The christening gets underway. After, Sharon thanks Nikki for being there. Paul makes a heartfelt speech.

At the Club, Luca doesn’t want Marisa to sleep with him just to get her daughter back; it has to be real. He loves her, and realizes the blackmail was a mistake. Marisa agrees what they had was good, but she doesn’t feel that way anymore. Luca decides he’ll take her to Ava; they’ll get their daughter back together. He makes arrangements. Marisa texts Noah. Downstairs, Victor spots Billy getting drunk. Ashley comes along and asks drunken Billy when he’ll grow up. He calls her a buzzkill. Ash asks the bartender to cut him off and call a cab and leaves. After, Victor watches as Billy tells the bartender not to bother, and leaves holding his car keys.

At the church, Paul gets a message about an emergency and pulls Victoria aside. “There’s been an accident. It’s about Billy.”

At the station, Victoria confronts Billy about getting in his car after drinking and hitting a post – thankfully a Club employee stopped him before he pulled into traffic. He says at least he didn’t hit a little girl. Victoria confronts him about Paragon and the fire. Billy says he wanted justice for Delia. Vikki snaps to stop hiding behind his daughter. She won’t have their kids around his self-destruction. Billy wonders if she’ll try to take his kids away. She won’t apologize for protecting her children. He won’t let her take them.

At the Club, Nikki asks Victor why he left the christening. He admits he followed Billy hoping to find out who he’s in cahoots with, but instead found him getting drunk – he had an employee follow him out so no one got hurt. Nearby, Marisa tells Noah that Luca is taking her to find her daughter. Noah wonders if she slept with him. They argue until Luca appears with their bags. Marisa leaves with him. Nikki and Victor check on Noah, who questions what Victor’s deal with Luca had to do with this. Victor says Marisa left on her own.

At Jabot, Ashley tells Stitch and Abby that Billy was arrested for DUI. She also tells him he was behind the latest Paragon attack. Abby worries that it’s Abbot versus Newman again, with fighting within the families as a bonus. Ash says Victor is holding something over Adam to control him – she wants Abby to see if she can find out what it is. Ben calls Ashley out on her tactics and they have a heated exchange. Abby notes their intensity, and says no to Ashley.

At Crimson Lights, Faith complains to Sharon and Dylan that her daddy left the christening because of Sage. Sharon reassures her.

At Chancellor Park, Nick tells Sage they shouldn’t have gone; it was too soon. Sage says she shouldn‘t have gone. Nick understands what it must have been like for her to hold Sullivan. Sage says he doesn’t, otherwise he would have let her hold her son. They rehash not holding their son after he was told he had died. Sage sees Nick trying to get her through this, but she just wants to be alone right now. Nick leaves. Adam appears. “Let me help you.”

At the church, Nick asks the minister how he can help someone who doesn’t want his help. They discuss the pain of losing a child. The minister reassures him that Sage will open up eventually.

At the penthouse, Sage tells Chelsea and Adam that no one could understand what it feels like to have lost this child. Adam offers to drive her home, but she can’t go there yet. She beats herself up for hurting people who try to help her. Adam invites her to stay for dinner and spend the night in the guestroom. Chelsea glances at him, but tells Sage she’s welcome. Chelsea goes to get the room ready, and leaves Sage and Adam to talk. She returns to see Sage crying about holding Sharon’s baby…in Adam’s arms.

Adam tells Nick, “I can’t let you see her.” Nick replies, “I don’t remember needing permission from you to speak with my wife.”

Jack tells Ashley, “Because of Victor, Phyllis spent our honeymoon in the arms of a ruthless psychopath.”

Victoria says to Victor, “You better come with me, Dad. I have a little surprise for you.”
Feel free to visit Y&R late-breaking news, Y&R comings and goings, and Y&R spoilers.