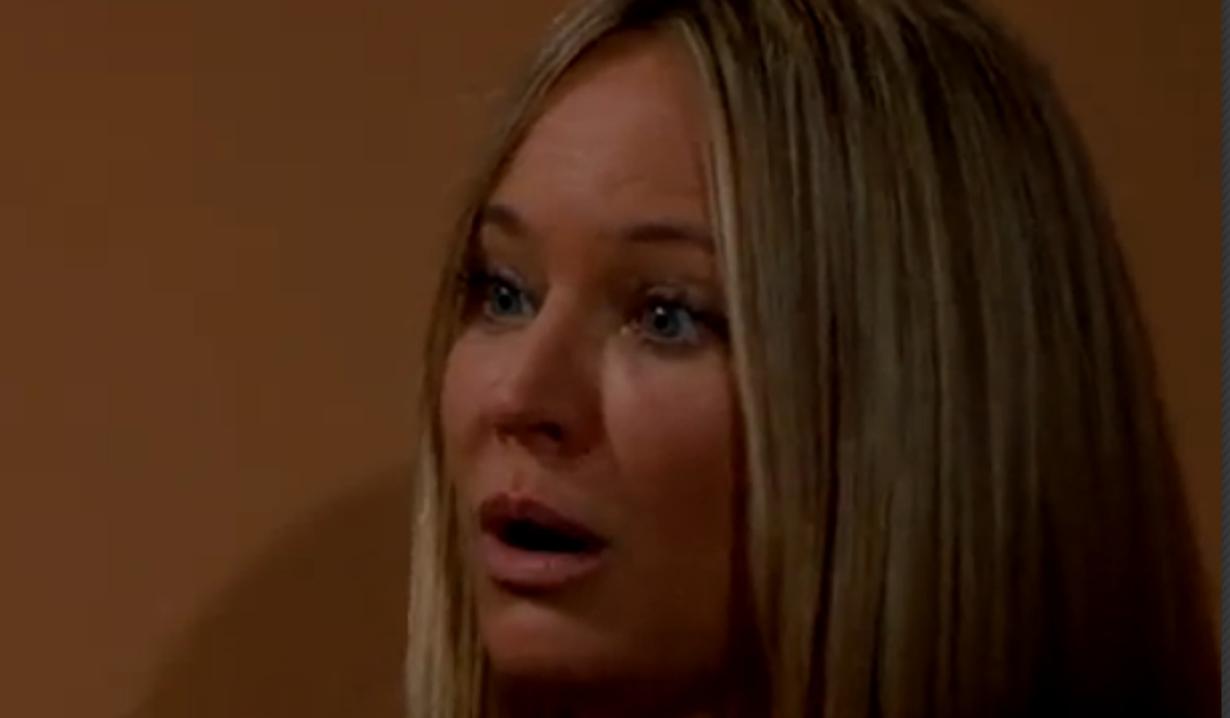 At Fairview, Dr. Anderson watches as Sharon talks to Dylan about their baby on a video call. Dylan wants to visit for Thanksgiving. Sharon looks at Anderson and changes the subject to Faith. Dylan says she’s been strong, and tells her Nick and Sage lost their baby. Sharon exclaims ‘no’ repeatedly and cries. Dylan asks if someone is there. Anderson points at her watch. Sharon tells him she must go – she’ll be late for therapy. Dylan tells her to be late then. Anderson disconnects the call. Sharon cries to Anderson about the lost baby and worries about her own. Anderson assures her she will carry her son to term. Sharon sees a huge baby bump in the mirror as Anderson loads another syringe. Sharon questions her – she just had her shot an hour ago. Anderson tells Sharon she’s confused and injects her. After, Anderson calls to check on Christian – she has big plans for him.

At Crimson Lights, Dylan stares at his disconnected call screen. A map comes up. He wonders, “Is this Neville?”

At the Club, Gwen talks to Devon about Neil’s guilt. He asks what Neil has to be guilty for. He thinks she knows something. Gwen says Hilary’s the problem, not her. She reminds Devon broke her vows when she was married to Neil, what makes him think she won’t do the same to him. Devon gets a message from Dylan that he has a lead, and goes. Upstairs, Hilary kisses Neil. He kisses her back and they fall back onto the bed. Neil stops – he can’t do this. Hilary knows he felt the kiss and still loves her. Neil says Devon has been paying since she fell over that cliff, and adds that Gwen is an innocent victim. Hilary says she still loves him. Neil leaves. Downstairs, Gwen gets catty talking to Neil about Hilary forgetting who her husband is. Neil reminds her Hilary lied to the police to protect them. Gwen asks, “What about me lying to the police to protect you?” Neil needs her to hang in there. Gwen complains about him feeding Hilary’s delusion. She says this is out of control. Neil defends Hilary. Gwen realizes he wants Hilary back.

At the Club, Neville visits Hilary’s room. She tries to get rid of him, but he says he can’t go – he has to chemically tweak something in her brain because she passed out. Hilary argues. Neville says he needs to do tests on her at his motel. She wonders why he’s risking everything to help a stranger. Neville talks his beloved mother falling into a coma when he was a teen – it’s why he dedicated himself to freeing people who are trapped. Downstairs, Neil admits to Gwen that part of him is drawn back to Hilary. Gwen urges him to remember what she did to him. He does, but also remembers what they had. Devon and Dylan appear. Gwen tells Neil if he follows them upstairs, he’ll regret it. He goes. Upstairs, Hilary’s suite is empty. Devon spots a box of meds. He asks Neil why he left Hilary alone. Neil says Neville wouldn’t hurt her. Devon asks how he knows that. Downstairs, Dylan is asking for surveillance footage when Hilary shows up. She admits she was with Neville, who is probably gone back to Ohio. Upstairs, Devon and Neil argue about Neville. Devon thinks Neil is talking like he knows him. Gwen appears. “Go ahead, tell him the truth. Or I will.”

At the tackhouse, Nick finds Sage sitting with her blue blanket. She doesn’t want to do anything with him. Nick says he can’t do this – the avoidance. Sage doesn’t want to talk about it. Nick feels she’s shutting him out. Sage feels he has expectations. Nick mentions Cassie. Sage says she’s sorry he has to relive that, but he can’t tell her how to grieve. Nick wants to grieve together – they can’t keep doing this.

In a therapist’s office, Nick and Sage each tell their side of things. It comes out that Sage thinks Nick only stayed with her after she lied about Adam because of the baby. Nick reassures her. He asks the therapist, why, if they want to be together, they feel so far apart. Sage still thinks Nick wants to be free of her. Nick says he meant his vows and loves her. She loves him too. They embrace. As they exit, they see Dr. Anderson. Nick asks about Sharon. Anderson gushes about Sharon’s excitement for her baby. Sage stalks off. Anderson says she’s sorry about Nick’s baby boy and offers to help him through it – she offers a unique perspective.

In an undisclosed location, a nurse tells Christian that Dr. Anderson can’t wait for him to meet his new mommy.

At Fairview, Sharon realizes she hasn’t felt the baby kick. She walks to the mirror, sees her flat stomach, and panics. “There’s no baby!”

Cane tells Paul he needs to clear his name, and he needs his help to do it.

Hilary tells Gwen that Neil really does care for her. Gwen says, “Not anymore. He made his choice, so I made mine.”

Nick tells Victor he appreciates him coming by. “Was there another reason you came?” Victor replies, “Yeah. It’s about Adam.”