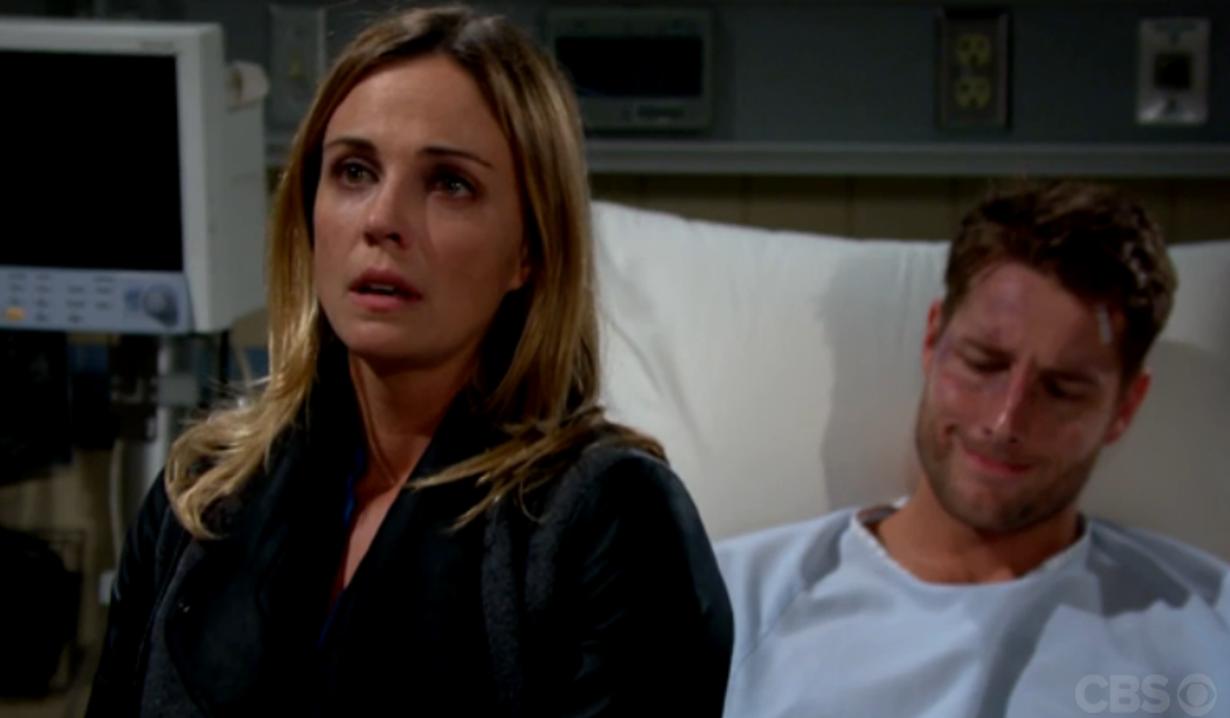 At the hospital, Nikki learns that Elise Moxley had an affair with Victor. She says it was years ago. Elise explains that he seduced her. Adam assumes Victor is now blackmailing her. Elise would rather deal with the ugly fallout and rule honestly. Nikki informs her she has no choice but to do what Victor’s asking – if Adam goes to prison, Victor will run down her family and everything in his path. Elise storms out. Nikki asks Adam what Victor’s getting out of the deal. “I already know – your soul.” In Stitch’s room, Ashley barks at him not to screw this up. Dylan enters. Ash goes. Dylan and Stitch rehash the fire. Dylan asks him about Dr. Neville. Stitch agrees he could be the one who gave Hilary drugs, but he doesn’t know where he is. Dylan asks what was really going on with Ashley. Stitch tells him the truth. Dylan asks what he’ll do. Stitch says he’ll marry Abby and make all her dreams come true.

At the tackhouse, Nick tells Sage it’s Katie’s birthday. Sage says she can’t go with him to the party. Nick understands. Sage urges him to go on his own. Once alone, she hugs a blue blanket and whispers, “Christian.” She sleeps and dreams of hearing Christian cry.

At Victoria and Billy’s house, Jack wonders why Victor should think their offer is still on the table. Billy blurts that it is. Victor accepts. Ashley arrives and learns that Victor accepted an offer from her brothers. She reminds them she is CEO. Phyllis suggests they all take Billy’s lead and look to the future. Outside, Nikki and Nick arrive simultaneously and discuss Sage pushing him away. They go inside. Jack is querying Phyllis about her new ‘forgive and forget’ motto. Victoria fills Nick and Nikki in. Nikki murmurs that Victor will do whatever it takes to help this family. Attention turns to Katie and Chelsea asks Abby if she and Stitch want kids. Abby grins at Ashley and says it’s the wedding of the century first. The party begins to break up. Nick tells Victor he’d like to come back to work. Victor brushes him off because Nikki shot him a dirty look and left. Jack wonders where Phyllis went – turns out she was upstairs with Billy putting Johnny down. Once alone, Victoria hugs Billy over Victor accepting his help. Billy agrees it was a perfect outcome. She asks what he’s up to with Phyllis. He plays innocent.

At Crimson Lights, Dylan wonders why Nick is there. He says he can’t go home to Sage. Dylan advises him just to be there for Sage, that’s all she needs.

At the hospital, Sage runs into a nurse who was on-duty the night Christian died. Sage enters Adam’s room. He asks why she’s there. She says it doesn’t matter. Adam tells her he won’t be going to prison, but it comes with a price. He asks about her. Sage tells him what a difficult time she’s having. She says Adam got her through losing Gabe and Constance, and now she’s turning to him, not Nick. Chelsea enters. “Am I interrupting something?” Sage says she should go. Chelsea tells Adam she gets the feeling something other than grief is keeping her from getting support from Nick. In Stitch’s room, Abby tells him that holding Katie made her think she’d be a good mom… in a few years. Stitch’s face changes. She asks, “You do want to have kids with me, don’t you?” He worries he wasn’t a good father to Max. Abby reassures him and talks about Billy and Victoria’s happiness. He muses it always starts out good. Abby wonders if he’s implying they won’t last. Stitch cites his poor track record. Abby assures him they’ll have an amazing life together.

At the Club, Victor asks Nikki what’s going on with her. She hisses at him about his affair with Elise Moxley. He wonders if she’s upset about the blackmail, or jealous. He says they weren’t married at the time, and claims he saved Elise Moxley’s marriage. Nikki mocks how it all turned into a fortuitous opportunity later. Victor doesn’t see the problem. Nikki snaps, “You wouldn’t.” She leaves.

At Jabot, Ashley tells Jack and Phyllis that she’s not okay with this, but Victor’s company can use the top three floors. Jack insists he wouldn’t harm Jabot. Ash hates his surprises. During a business call, Ashley flashes to Stitch saying, “I love you.” Elsewhere, Jack asks Phyllis what she’s up to. She says, “Righting a wrong.”

In an undisclosed location, a nurse talks into the phone and says she got him out of the hospital no problem. He’s no longer in the incubator, is fine, and is a beautiful baby. “Aren’t you, Christian?”

Hilary is unconscious. Devon hollers, “What happened to her?” Neil yells at Dylan, “I told you not to push too hard.”

The Paragon computer hacker appears in Adam’s room. “We’ve got a problem. A big one.”