Summary for Wednesday November 4 2015: Phyllis and Patty get physical, Stitch tells Ashley something important, and Sage and Nick get devastating news. 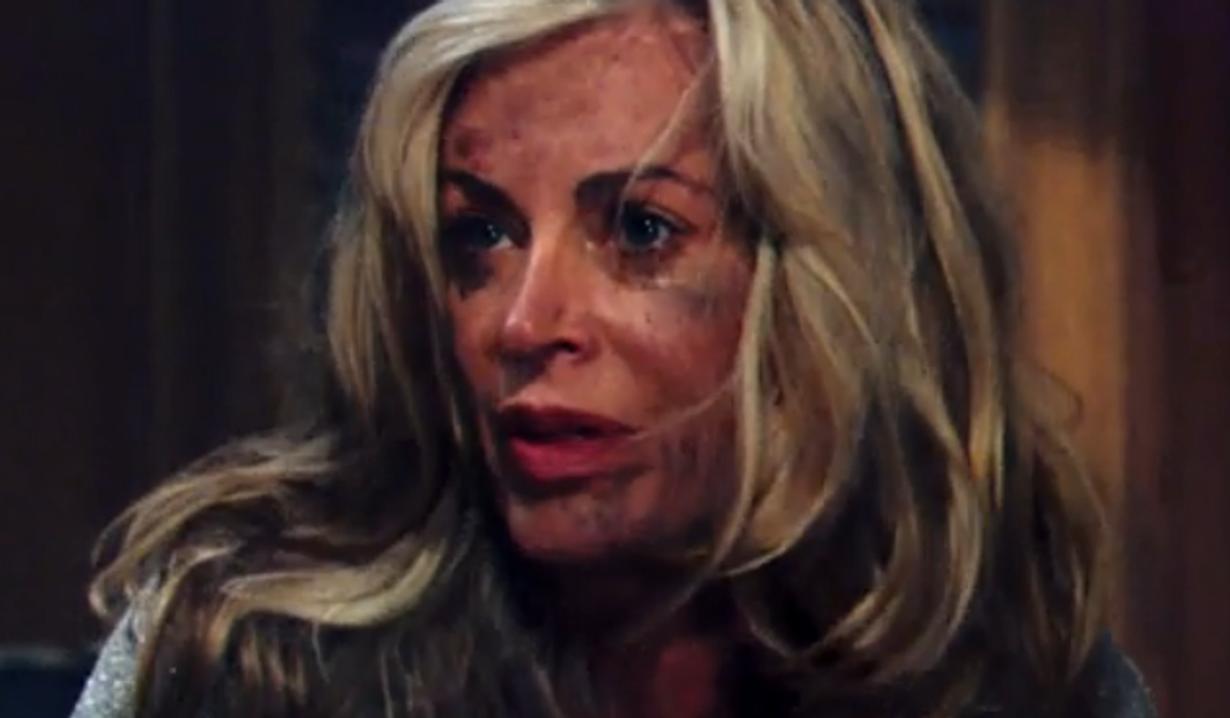 At Newman Towers, Paul tells Nick, with Sage, to go to the hospital to meet up with their loved ones. Nick still has family inside. Sage and Paul convince him to leave. In the stairwell, Billy and Victor wake Adam up. They tell him Chelsea is safe. Adam wants to find Jack but he can hardly stand. Billy leaves Victor to help him alone. Victor tells Adam his being there proves he’s a Newman. In the ballroom, Joe complains to Abby about Dylan not letting him on the helicopter. Abby tells him Ashley and Stitch haven’t come back. In the employee kitchen, Ashley and Ben hold hands. She won’t go anywhere without him. They talk about being survivors and hope Abby is okay. She thanks him for making her happy. Stitch says she was right. “I still have feelings for you.” He needs her to know…just in case. “I love you.” Ashley kisses him. They hear a noise. Stitch says, “That’s the gas line.” In the lounge, Jack and Phyllis are stunned to see a smiling Patty. She laughs, “Out of the fry pan and into the fire.” Phyllis asks if she set it. Patty says she’s there to help. She asks about Dylan. Jack doesn’t know if he got out. He suggests she lead the way out. Phyllis harps about their history and Patty lunges at her. Jack pulls her off. He tells Patty no one has ever loved him like she has – he needs her to be strong and solid now so they can put things back together tomorrow. Patty kisses him. Phyllis punches her. “Keep your hands off my husband you sick bitch!” In the ballroom, Abby spots Victor helping Adam in. Victor tells Adam this is his last chance for freedom. Billy appears and taunts Adam. “Go ahead. Run.” Billy and Victor argue until Adam says enough – he’s not running. Victor wants Adam to go in the helicopter – it might be the last one. Adam refuses. Victor tells Abby to go, but she secretly tells Joe to take her spot. In the lobby, Paul checks in with Dylan on the roof. He hasn’t seen Patty. A firefighter tells Paul that the fire safety systems were deliberately shut down. Upstairs, Abby calls out to Ashley and Ben, who are trying to find the gas shut-off valve. They hear her, but there’s a huge explosion. In the lounge, Phyllis tells Jack they have to get out of there, but Jack doesn’t want to leave Patty. He can’t find a pulse, so he and Phyllis venture into the flames and smoke. In the ballroom, Billy refuses to die there with Adam and Victor. The helicopter returns to the roof and they head out. Adam stops – he sees a figure through the smoke. He tells Victor to go ahead and confronts the masked devil that left him to die – it’s Ian Ward. In the employee kitchen, Abby finds Ben collapsed over top of Ashley. She moves him and checks her mother. “Please be okay.” In the lobby, Jack and Phyllis emerge coughing. Jack tells Paul that Patty was trapped upstairs “She’s gone Paul.”

At the hospital, Lauren and Michael watch Kevin try to check the Newman security system on Michael’s laptop as Mariah dozes. Lily appears. Lauren tries to reassure her about Cane. Victoria and Chelsea thank Mariah and Kevin, who tells Chelsea that Adam went to the tower to save her. In the chapel, Nikki prays and talks about Victor. She asks God to get Victor out of that building and bring him home to her. She rejoins Victoria and the others. Lily asks if they saw Cane. They didn’t. Chelsea is panicked about Adam. Nikki reassures them no one will be left behind. Chelsea turns on Michael for not keeping Adam in the hospital. Lauren defends him and Chelsea apologizes. Nick and Sage arrive. Faith wants to know where the rest of the family is. Sage takes her away. Nick tells Victoria and Nikki the fire is bad…Abby and Victor need to get out soon. After, Sage and Nick go to see Christian. Kevin stares at the laptop and tells Mariah that someone was in the Newman computer system. Joe arrives and Lily hugs him. She tells him she hasn’t heard from Cane. Joe says there was a huge explosion as the helicopter took off. At the NICU, Sage and Nick are told by a nurse that Christian didn’t make it. The incubator is empty.

Paul says to Dylan, “One more trip, but when I tell you to get off the roof I mean it. You better damn well follow my orders!”

Nikki tells Victor, “You be safe. Bring them home, alright?”

Ian holds out his arms and shouts, “Behold my creation in all its glory!” He then moves to strike Adam.