Summary for Monday November 2 2015: Noah and Marisa make love, Cane is knocked unconscious, and Christine is unyielding where Adam is concerned. 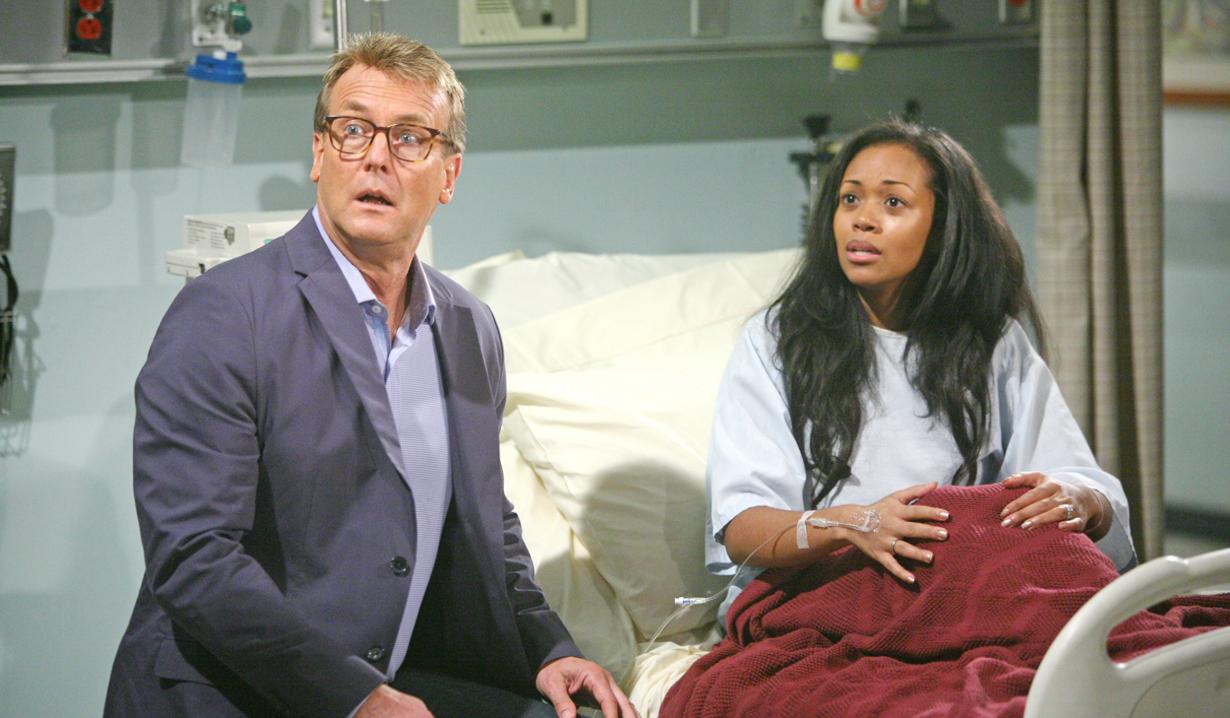 At the Top of the Tower, smoke emerges from the door of the electrical room. Meanwhile, Victoria and a dubious Billy drop the kids off with Kevin and Mariah in the lounge. In the ballroom, Lauren admires Abby’s ring, Sage apologizes to Victor for not trusting him before, and Noah joins Nick as Marisa arrives with Luca. He tells Nick that Luca is her husband, but she’s not really with him. Billy makes a speech to thank everyone for supporting the Delia Project. He even thanks Victor for use of the ballroom. Jack and Victor muse about the Paragon Project as a person in a red cloak and black mask lurks. Lily is chatting with Joe when Cane calls to say they found Hilary. He hears Joe in the background and says he’s coming soon.

At the hospital, Michael checks on Adam. Christine enters and says she told the warden at Walworth to expect Adam tonight. Michael argues with her, but Chris won’t be swayed. Elsewhere, Devon questions Stitch about Hilary’s confusion as Dylan listens in. Dylan can’t understand why she’s scared of Devon – did he have something to do with her fall? Devon denies it. In Hilary’s room, Neil tells her she had an accident while on a hike. Paul asks if she recalls who she argued with before her fall. She’s confused. Neil explains she went missing after the fall…for a couple of months. Paul tells her she was on her honeymoon. Neil tells her she married Devon. Devon enters as she says she loves Neil and would never marry Devon. Paul leaves them to sort through it. Hilary can’t accept that she’s married to Devon, not Neil. Devon tells her all about their wedding, and says they took their honeymoon in the Virgin Islands. Neil fills her in about her and Devon’s affair. She asks why she would do that. Elsewhere, Stitch tells Christine he won’t be signing release papers for Adam. Chris tells Paul she’ll do anything to make sure he won’t bolt. In Adam’s room, Michael video calls Lauren so Adam can see Connor in the Halloween parade. Chelsea gets on and says hello to Adam too. After, Michael wants to file an appeal – he’s helping Adam because of what Avery taught him. Adam talks about his regrets from that night. Michael says it was an accident and he’ll never stop trying to prove that. Chris arrives and handcuffs Adam to the bed. Outside Hilary’s room, Paul tells Dylan they have to wait for Hilary to remember. In her room, Hilary hollers at Devon that she doesn’t love him, she loves Neil. She orders Devon out. Neil says he’ll stay with her.

At the gala, Victor asks Kevin to keep an eye on the security system. Chelsea hangs up from Adam and Victor hugs her. At the bar, Noah tells Marisa he hasn’t found her daughter yet. Luca appears and warns Noah they don’t want things to get ugly. Noah says, “Too late.” Downstairs, Stitch arrives and learns the elevator is out of service. He will take the stairs. In the lounge, Kevin works on his laptop and goes to check on the elevators again. Mariah tells the kids they can have more candy. In the hall, Kevin encounters Cane, who just came up the stairs. Kevin says there’s an override on the system he can’t crack. They need to get people out – whatever’s going on is dangerous. In the ballroom, Nick and Sage tell Nikki and Victor they’re leaving after they say goodnight to Noah and Faith. Noah tells Marisa to come with him. She follows. Victor notices and tells Luca. Lily tells Joe she’s relieved Cane didn’t come. In the stairwell, Cane makes his way up to the gala, but a red-cloaked person knocks him out. Meanwhile, Stitch, floors below the gala, unsuccessfully tries the elevator and notices smoke coming from under a door. He reaches for the door handle as there’s a huge explosion. He’s knocked out and flames shoot from the building below the restaurant. At the gala, Billy asks to speak to Chelsea alone after she thanks him for forgiving Adam. Billy tells Chelsea she and Adam have the same love he and Victoria have – it never dies. Downstairs, Stitch comes to. The fire alarm and fire hose don’t work. In an office, Noah and Marisa start making love. Luca sees them. In the lounge, Sage and Nick agree to stay for Mariah’s scary story. There’s a devil on Kevin’s computer screen. He says, “Paragon’s back.” In the stairwell, a person in a red cloak and mask stands over Cane. At the gala, Luca watches Noah and Marisa return and tells her he thought she’d wandered off. A disheveled Stitch stumbles up to Abby, who thinks he’s dressed as a zombie. He tells her there’s a fire and then announces it to everyone. “We have to get out of here now!”

Dylan takes a call from Patty, who is in the lobby of the Newman building. She tells Dylan, “It’s your Aunt Patty. I’m in town and I really need to see you, it’s important.”

Michael tells Adam, “Newman Towers is on fire.” Adam says, “You have to help me get out of here, please!”

Chelsea screams at Jack, “Let me go!” Nikki says, “Oh my God, what is happening?” Victor says, “You stay here. Help is on the way.” 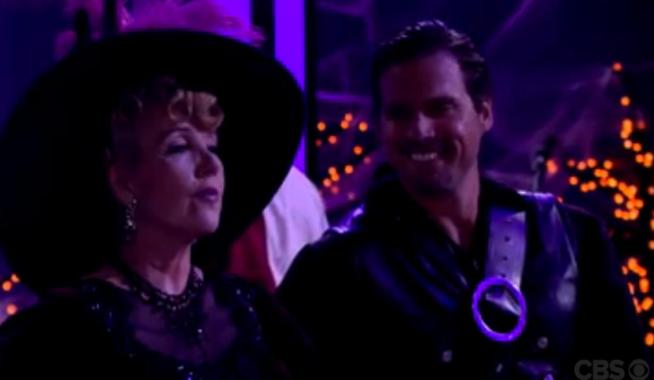 Y&R Day Ahead Recap: More lives are in peril as the situation worsens at Newman Towers 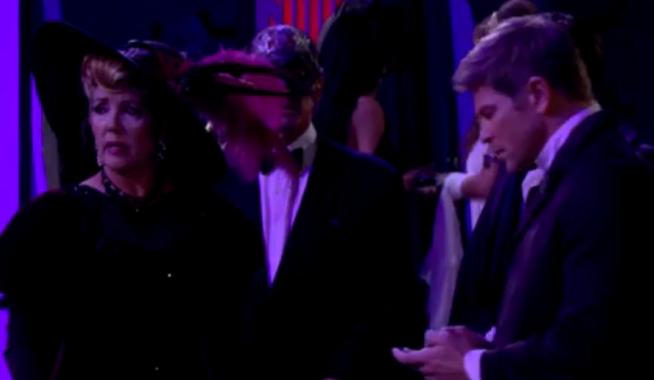