Summary for Monday October 26 2015: Ashley realizes Ben was set to propose, Christian has a crisis, and Adam is taken for emergency surgery. 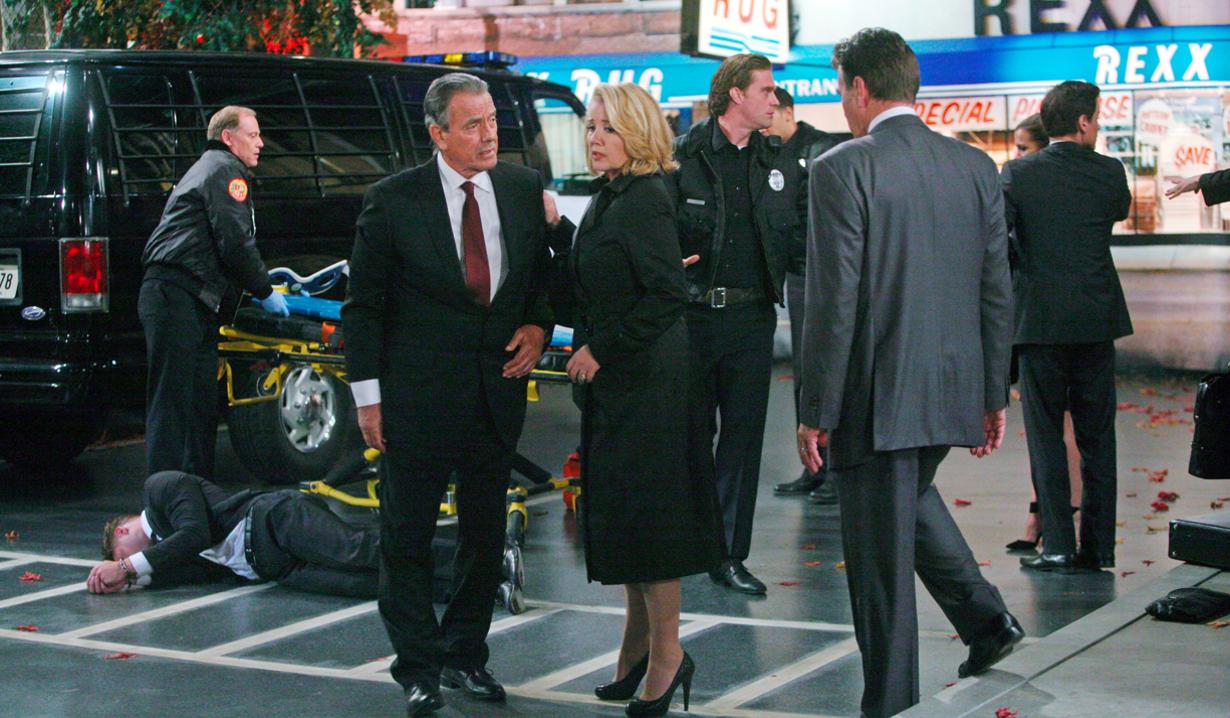 At the park, Billy ignores his phone. He figures it’s a call about Adam’s sentencing and he tells Victoria he doesn’t want to think about him tonight.

Outside the courthouse, a car runs Adam down. Chelsea calls hysterically for an ambulance. Victor kneels beside his son. As the paramedics load Adam up, Victor asks if anyone saw who was driving the car. He remarks that Billy left the courtroom before the sentencing – he wants answers. Chelsea wants to go in the ambulance but Michael reminds her he’s a prisoner.

At the Club, Stitch has champagne with Abby. He hopes tonight is one she won’t forget. “Abby Newman…” Ashley interrupts and asks what they’re celebrating. She tells them about Adam’s sentence and Stitch gets called to the hospital. Abby says she thinks Ben was about to propose. Ash tightly says, “Nice.” Ash wonders if Abby is ready. Abby admits she never thought about marrying anyone until she thought Ben was going to propose – but it made her think she’d like to be his wife.

At the hospital, Sage tells Nick she’s anxious to take Christian home. Nick gets her to choose a paint color for the nursery and tells her Christian is fighting. Michael enters the NICU. He tells Nick that Adam got ten years, but is in the emergency room. “We’re not sure if he’s going to make it.” In the ER, Ben orders the handcuffs removed from Adam. Chelsea, Victor, Nikki, and Phyllis arrive as Adam goes for scans. Victor and Phyllis bicker – he thinks Jack went to find Billy. Victor then reassures Chelsea. A police officer stops Chelsea from going in with Adam.

At Crimson Lights, Billy tells Victoria he couldn’t have got to where he is now without her. She tells him, “Welcome back.” Jack arrives and says Adam got ten years in prison, but may not serve it – he was struck by a hit-and-run driver. Billy realizes he’s concerned that he did it. Victoria reminds him Billy forgave Adam. Jack says someone hated him enough to want to kill him. They all head to the hospital.

At the station, Christine cries to Paul about the hit-and-run happening in front of her. All she could think about was the night Nikki and Neil hit her and she lost their baby. She collects herself and gives Paul her statement – there is no doubt Adam was the intended target and the car was white. Paul gets a call from Victor who wants to be able to ensure Adam is getting the best care. Michael arrives. He agrees the car was white, and says it might have been a sedan. Michael says there was no screech of brakes or attempt to stop; whoever hit Adam intended to kill him. Later, Christine takes a call and tells Michael a car fitting the description was found at the South Lake Hotel.

At the hospital, Nick asks Victor if the guard on Adam’s door is necessary. Victor says he just called Paul about it. Sage checks in with Chelsea, who tells her not to talk as though Adam’s already dead. Nick and Sage give Nikki and Victor an update on Christian. Victoria arrives, followed by Jack and Billy. Victor tells the officer to arrest Billy, who insists he meant what he said in the court – there’s been enough pain. He didn’t want revenge. Paul arrives to get statements. Victor barks at him to start with Billy Boy. Paul does, but Jack tells him to leave his brother out of it. Victoria says Billy was with her. Paul recalls she lied to protect her father not long ago. Victoria wants whoever did this to be held accountable. Billy offers to let Paul check out his car. He then tells Chelsea he never thought he’d say this, but he hopes Adam pulls through.

At the Club, Ashley gets a call from Jack about Adam. She tells Abby, who leaves.

Abby arrives at the hospital, where Chelsea tells her Ben is in with Adam and she knows nothing. Abby reassures her. Nearby, Nikki and Paul discuss Christine. Nikki notices Victor has disappeared. She worries he’s taken matters into his own hands. Ben emerges from Adam’s room- he needs emergency surgery and even then it’s touch and go. Paul allows Chelsea to go in. She urges him to fight so they can have their dream. He’s taken to surgery. Elsewhere, Sage and Nick talk about how lucky they are. Suddenly an alarm sounds in the NICU – it’s Christian – he stopped breathing.

At the penthouse, Victor gives the sitter money to go eat, and tells Connor how much Adam loves him. Victor prays for the Lord to save his daddy.

At the Club, Ashley tells Jack and Phyllis this is cosmic justice. Billy pipes up that it was attempted murder – what Adam did was an accident and he shouldn’t pay with his life. Billy adds that the upside to all this forgiveness is he gets his brother back. The pair makes amends. The group breaks up. Ashley finds the engagement ring intended for Abby in the champagne glass.

Ashley says to Ben, “You know what, I’m sorry, but it wasn’t that long ago you told me you couldn’t get me off your mind. That’s a little disturbing.”

Jack says to Victor, “Go ahead, get it out.” Victor says, “I want to thank you.”

Paul and Kevin discover Mariah unconscious on the floor of The Underground.