Y&R Day Ahead Recap: Adam’s verdict is followed by a shocking occurrence

Summary for Friday October 23 2015: Evidence mounts against Cane, Victoria wants Billy to forgive himself, and a deliberate act stuns onlookers outside the courthouse. 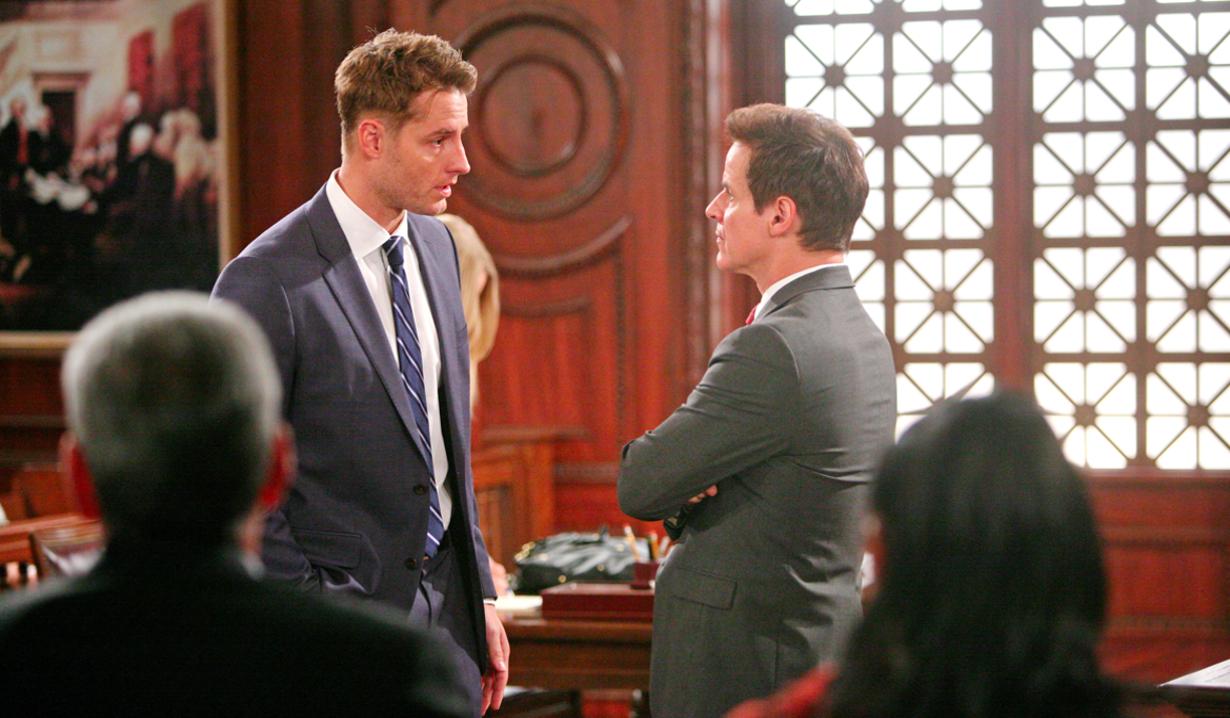 At home, Cane tells Lily and Neil he’s going to prove the cops wrong. There’s a knock – it’s Paul and some officers with a search warrant. Cane is angry and lashes out.

At the Club, Devon receives a search warrant for Cane’s gym locker. Joe asks Dylan if Cane did it. Dylan tells him he should stay out of it. Devon returns. The authorities found a hoodie like the ransom guy wore. Devon’s never seen Cane wear one in his life; the evidence is piling up. Neil, Lily, and Cane arrive. Devon tells Cane about the hoodie. Cane wonders if they really think he did this and is stupid enough to leave the evidence at home and the gym? Dylan says surveillance footage shows Cane entering the locker room carrying something the day after the ransom drop and coming out empty-handed. Devon thinks he should just admit he’s guilty. Cane wants Lily to defend him and they end up bickering. She needs him to help her understand. Cane says she’s the one person he shouldn’t have to prove himself to. He brings up her indiscretion with Joe and says he forgave her. Devon intervenes and Cane gets heated. Dylan and Joe get involved, and Lily’s in tears. Cane tells them all to go to hell. After, Lily tries unsuccessfully to reach Cane. Neil offers to go look for him. Lily tells Devon she’s sorry Hilary’s still missing. He says it’s not her fault. Devon goes to check messages and Lily thanks Joe for stepping in earlier. He offers his friendship.

In the courtroom, Billy and Adam learn the jury has reached a verdict. Billy tells Adam he did what he had to do for himself and his daughter – it wasn’t for him. Outside the courtroom, Phyllis and Ashley talk about wounds needing to be healed. Lauren joins Michael – she’s there to support him. Everyone goes in to hear the verdict. Chelsea tells Adam she loves him. The judge returns, and Paul joins Christine. Adam is found guilty of felony hit-and-run in the death of Cordelia Abbott. A brief recess is called. Michael tells Adam and Chelsea the sentencing may not be as bad as they fear. Billy decides to go and Kevin follows. He’s outraged that Billy forgave Adam and doesn’t seem to care if he gets a slap on the wrist. Victoria tells Kevin they are leaving. Kevin says he’ll tell the judge Adam needs to suffer. Court reconvenes and Kevin takes the stand to say that he can’t forgive Adam for having the answers and hiding them. He showed no compassion and should be punished to the full extent of the law. Jack goes next. He asks for forgiveness for Adam and thinks leniency would memorialize Delia’s kindness. Victor speaks also. He thinks Adam acted out of fear and grief, not malicious intent. Esther gets up to talk about looking for the scarf Adam burned to cover up what he did – like it was nothing; like she was nothing. Chelsea tells the court she doesn’t condone Adam’s actions, but he is a good person, who confessed despite the cost. She begs for mercy for Adam and their family. The judge invites Adam to speak. He says he won’t dispute the guilty verdict and he deserves to be punished, but his little boy doesn’t. He asks the judge to let him be a father to his son. The judge calls another recess. Kevin tells Michael he hopes his child-killing client will never see the light of day again. Michael says it won’t erase his pain. Chelsea tells Adam she wants him home, Nikki reassures Victor it will soon be over, and Phyllis tells Ashley and Jack she thinks Adam should pay. Court reconvenes. The judge sentences Adam to ten years in the state penitentiary. Kevin says it’s not enough, and Adam tells Chelsea they’ll always have Kansas as he’s led away. Outside, everyone gathers around as Michael and Adam come down the courthouse steps. Adam heads to the police van and a car accelerates and runs him down. Stunned reactions ensue as Adam lays unconscious in the road.

At the park, Billy talks to Delia at her tree. He tells her Adam was found guilty and it’s all over now. Victoria tells Billy she’s worried about them because he’s lying; he just stood there and lied to Delia. It’s not finished. He hasn’t let go of the anger. Billy wonders what else he has to do. Victoria says he must forgive himself. Billy hollers that it’s his fault – he was supposed to protect her. Victoria says he needs to bury his guilt for Delia’s brother and sister. “You told Delia the anger was gone. Don’t lie to her.” Billy cries. The leaves on the tree flutter. Billy says Delia’s finally at peace. Delia says, “I love you daddy.”

At the station, Dylan and Paul discuss Cane. Paul will have the lab analyze the hoodie.

At home, Cane tells Neil he can’t stay there if his wife doesn’t believe him.

Michael tells Paul, “There was no screech of brakes, no attempt to stop; whoever hit Adam intended to kill him.”

Victor hollers at Jack, “Your brother Billy Boy left the courtroom just before the sentencing, didn’t he? I want answers!”

Y&R Day Ahead Recap: The courtroom...