Y&R Day Ahead Recap: The courtroom is stunned by Billy’s testimony

Summary for Thursday October 22 2015: Chelsea has a scare, Victor warns Luca, and Noah misunderstands what he sees. 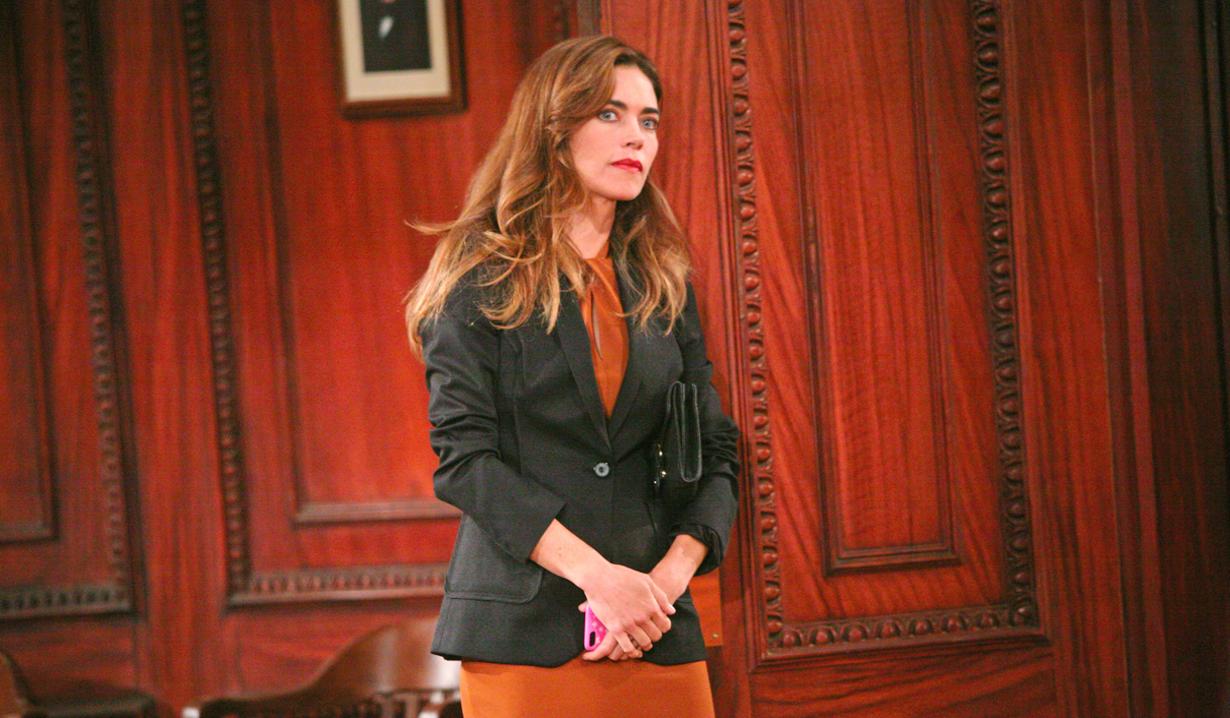 In a private room at the station, Michael tells Adam that they can’t let the court hear what Billy has to say. He wants Adam to plead guilty to a lesser charge. Michael exits and Jack joins Adam, who isn’t feeling optimistic about his chances once Billy testifies. Jack thought he was going to fight. Adam says he got one more night with his family – it has to be enough. Elsewhere, Michael bickers with Christine about the possibility of a plea deal. After, Michael rejoins Adam and Jack and says Christine rejected his offer. Jack wishes them luck.

At the park, Chelsea tells Connor that Adam deserves a second chance and she hopes he gets one. Billy appears. “I don’t.” Chelsea knows it will be terrible for him to relive the day Delia died on the stand. They bicker about Chelsea’s testimony. She says she was thinking of Connor. Billy says he’d be better off without Adam. Chelsea snaps, “How dare you.” She goes to leave with Connor, but he’s gone. They call out his name. Eventually, Billy finds him by the duck pond. He feels guilty for distracting her. Chelsea says it’s her responsibility to look out for her child – if something had happened it would be her fault and no one else’s. Suddenly she realizes what she said and apologizes.

At Crimson Lights, Noah tells Kevin that he needs him to help find Marisa’s daughter. Mariah appears. “Marisa has a kid?” Noah fills them in on the latest. Kevin says he agrees with Victor that Marisa is trouble. Noah defends her. Mariah chimes in and Kevin agrees to try and track the girl down. First, Kevin is going to see Adam convicted.

In her suite, Marisa wakes up and asks Luca what he’s doing there. He heard her cry out through the door. She says he can go now. He has a necklace for her. She lets him put the pearls on her. He tells her to join him downstairs for breakfast. Downstairs, Ashley asks Victor if he’s found a way to stop the Paragon virus. Victor warns her about feeding off the misfortune of his company. She counters that he would have fed off their company until there was nothing left – maybe she’ll do the same to him. They spar verbally. Victor warns the virus could come to her doorstep. Ashley isn’t concerned. After, Victor spots Luca, who warns him to make sure Noah doesn’t take matters into his own hands. Victor tells him to look after getting his wife out of town and reminds him to be careful with Noah, who is a Newman. Soon, Marisa joins Luca and they are laughing over an old memory when Noah appears.

At The Underground, Mariah finds Noah smashing glasses around. She notices he’s ignoring Marisa’s calls. Noah tells her she’s laughing it up with Luca at the Club. Mariah thinks it was an act. Noah walks away and Mariah texts Marisa to let her know where he is. Later, Noah comes from the back room to find Marisa there. Mariah leaves. Marisa tells him what he saw was an act. Noah says Kevin will help them. She hugs him. “Thank you.” She tells him she loves him – he’s the only man she wants to be with. “Make love to me.” They have sex in the back room.

At the courthouse, Victor tells Victoria that Billy Boy will be defined by his rage. Jack arrives and tries to defend Adam to Kevin. Chelsea arrives, and Adam comes in with Michael. Billy slowly enters. Victoria asks if he’s ready for this. He’s ready. Christine puts Billy on the stand and asks him about the night Delia died. He cries as he recounts leaving her in the car and returning to find her gone. He talks about waiting for the ambulance after he found her. “It’s my fault.” Christine tells the judge he’s overwrought and doesn’t know what he’s saying. Billy insists he does – it was his fault. Adam stands. “No, no, no. It was an accident, Billy. You can’t blame yourself.” Christine tries to call a recess, but the judge tells her to resume. When she does, Billy goes on a rant about blame. He can’t keep blaming Adam, it doesn’t give him the answers he needs. The only way he, and Delia, will have peace is if he forgives him. “We all need to forgive him.” Michael does a summation to the jury about Delia and Adam’s paths crossing that night. It was an accident, and Billy Abbott said it was his fault. Both men are suffering tremendous guilt, but neither is guilty. “You heard Delia’s father ask you to forgive Adam Newman.” Christine does her summation, and says a child is dead and the man who struck her and then tried to cover up his actions has to pay. After, outside court, Victoria looks for Billy. Chelsea tells her what happened in the park. In the courtroom, Billy and Adam look at each other. The bailiff announces that the jury has reached a verdict.

Dylan says to Joe, “Lily’s standing by her husband. Do them both a favor and stay out of it.”

At Cane’s door, Paul serves him with a search warrant for the premises.

Billy says the jury is headed back in. Jack says, “Already?”