Summary for Tuesday October 6 2015: Victor talks with Adam, Phyllis lashes out at Chelsea, and Billy goes to Delia’s roadside memorial. 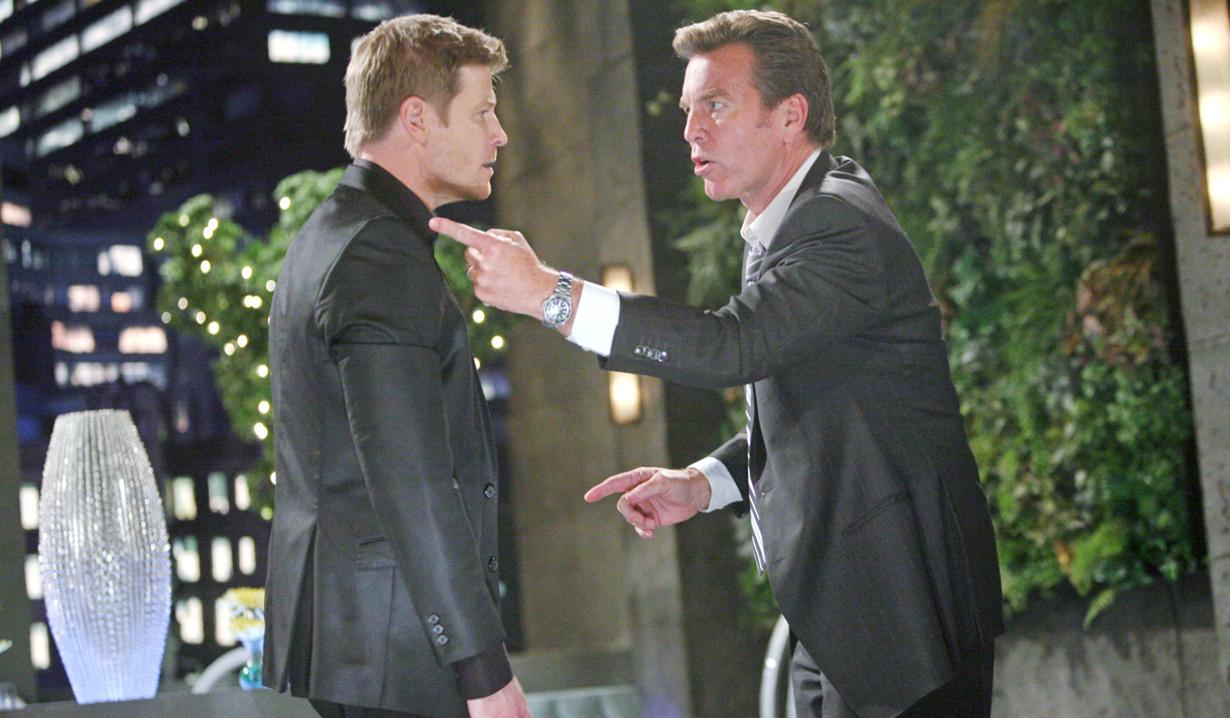 At Newman Enterprises, Jack and Phyllis question Chelsea telling Billy about Adam. Phyllis wonders if she’s looking for Billy to get her revenge. She reminds him Jack kept quiet to protect his brother. Chelsea says somebody had to tell the truth. Jack gets a call as to Billy’s whereabouts and leaves. Phyllis and Chelsea keep bickering. Chelsea reminds Phyllis that Jack knew about Adam before anyone else. Phyllis goes after Chelsea for being selfish. Chelsea says she could have stopped Adam sooner, but so could have Jack. They both loved him too much to tell the truth.

At the Dive Bar, Adam tells Victor he won’t abandon his son. Victor hollers that he’ll go to prison and mess up his son’s life. Adam wonders if he wants him dead and if he’ll kill him. Victor says someone else will have the pleasure of doing it. Billy looks on. Adam chuckles about his father allowing Billy to murder his own son. Billy says no one would blame him. Adam agrees. He urges Billy to make his move. “Do it!” They bicker over whether Adam deserves to die. Billy starts punching him. Jack arrives and intervenes. He tells Billy that Victor is watching because he wants him to do his dirty work. Jack urges Adam to go. Victor tells Billy to ask Jack if he has something to compensate for. Once alone, Jack admits to Billy that he knew Gabriel was Adam since he came to town. Billy accuses Jack of choosing Adam over him. Jack explains he was protecting him. Billy yells that it wasn’t his call. Jack reaches out but Billy pushes him away. Downstairs, Victor finds Adam nursing a drink. Adam accuses him of dancing on his grave when he wasn’t even in it. Victor flashes to talking to Adam when he thought he was dead and saying he understands he was protecting his family, and regrets that they never were close. He tells Adam he just doesn’t understand. Adam says nothing he did was ever good enough. Victor counters that he chose to come back from Paris and ruin him. He did miss Adam; he missed his son and thought about what he might have done wrong. Victor tells Adam to take responsibility for what he did. They argue about Victor going after visitation with Connor. Adam says that’s when he pulled the trigger. He tells Victor he lost Connor and now he’ll lose Newman – they’ll both be left with nothing. Victor will fight him to the death for his company. Upstairs, Phyllis joins Jack, who wonders if she understands that he protected Billy. Phyllis thinks he protected Adam. She says Adam destroys things. Jack wants her to tell him he hasn’t destroyed them. He makes a heartfelt appeal. Phyllis turns to embrace him.

At The Underground, Nick lashes out at Sage for keeping Adam’s identity a secret. Victoria chimes in. Sage guesses Nick now wants to know if he fathered her child. She sneers that she switched the paternity results. “You’re not the father.” Sage wonders if he wants to hear that everything was a lie. Sage tells him he knows he’s the father and asks him not to do this. Victoria suggests Sage take another test. Sage says they should put it to a family vote. Nikki warns stress is bad for the baby. Sage tells Nick she’ll move out and he can get the divorce papers ready – she doesn’t want a damn thing. Sage goes and Victoria tells Nick she’ll get Michael to file for an annulment. Nikki tells her to stop. She asks Nick if he’s going to let Sage go. Nick is just tired. Victoria leaves to find Billy. Nikki can’t believe Adam is causing more pain. She’s worried about Victor. Later, Victor arrives and has a drink. He tells Nick that Adam is pleased with himself over the Paragon Project. He recalls how wonderful Hope was; he wishes Adam inherited more from her and less from him. Victor wants Nick to help him stop Adam. Nick says they’ll build the company back up; Adam doesn’t deserve their last name.

At the penthouse, Chelsea fills Anita in on Gabriel being Adam. Anita asks where he is. Chelsea doesn’t care; they’re over. Later, Chelsea tells Connor that Daddy did something bad and can’t see him anymore.

Adam finds Sage crying in Chancellor Park. She confirms Victoria told Nick. She lost Gabriel and now Nick because of him. She shoves him in the chest until she doubles over. “It’s coming, it’s coming! It’s too soon!”

At Delia’s roadside memorial, Billy talks to her about hating Adam. He swears to make him pay. Victoria arrives. She assures him there will be justice. Billy wants a world where Adam Newman is dead and gone.

Nick says, “At this rate we’re going to lose everything.” Victor looks at his phone and muses, “I think I may have just found a way out.”

Devon says, “Someone has Hilary and they’re holding her for ransom.” Colin says, “You think it’s me.”

As Jill looks on, Nikki tells Paul, “Adam is alive and Billy has gone after him.” Paul gapes. “Adam Newman?”