Y&R Day Ahead Recap: Cane and Michael end up in the slammer 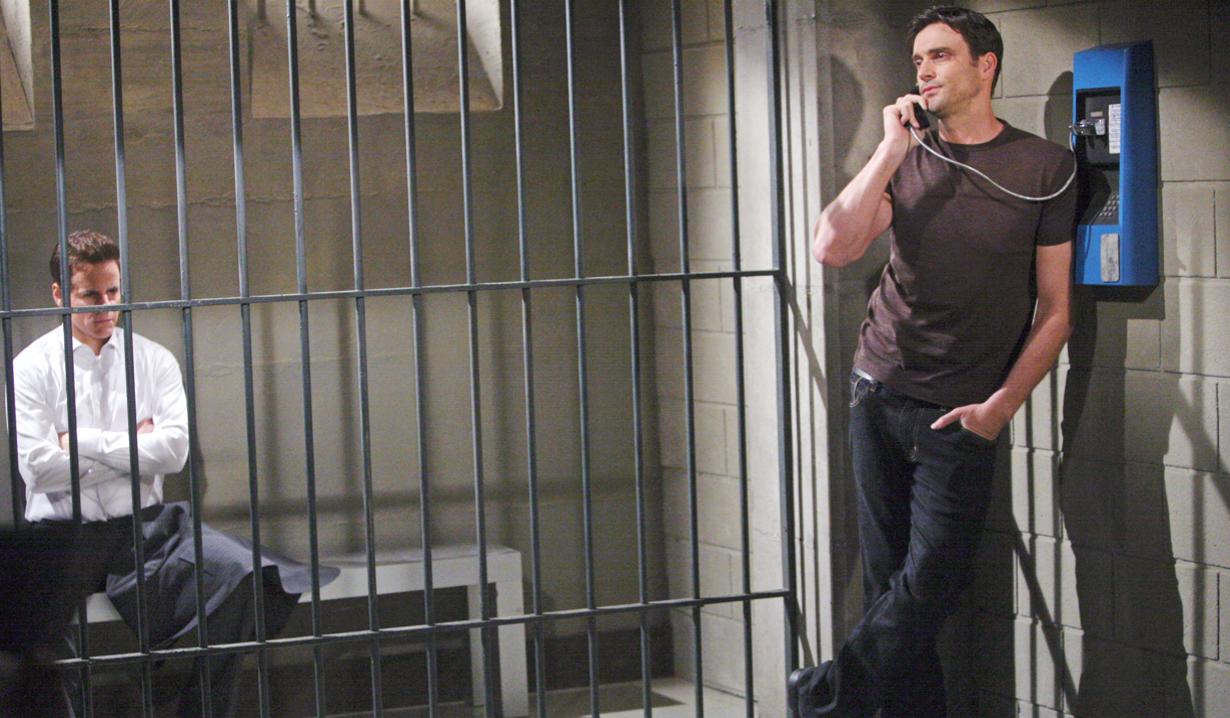 At Crimson Lights, Victoria thanks Chelsea for meeting her there and tells her she wishes to clear the air. Chelsea says, “Your father used my son to blackmail me and Gabe into staying in town.” Victoria defends Victor’s need to maintain a connection with his grandson. Chelsea thinks Victoria should understand dealing with Victor’s meddling. Victoria recalls how he had her arrested to stop her from marrying Billy – five years ago today. She says they prevailed anyway – Paris may have to wait but she and Gabe will get there. Chelsea thinks Billy and Victoria are meant to be.

At Jabot, Adam asks Ashley for his old job back. Billy says there’s no way in hell. Jack advocates for ‘Gabe’. Ashley says he’s an untrustworthy, power-driven egomaniac. Jack agrees – those are the very reasons she should hire him. Billy is puzzled. Jack says ‘Gabe’ can out-Victor Victor. Adam says he didn’t know John Abbott, but he thinks he would have been sympathetic to Chelsea’s situation. Billy sneers and goes on. Jack says he doesn’t get a vote. Ashley notes that Jack doesn’t have one either. Billy leaves and Ashley tells ‘Gabe’ he can go. By the elevator, Adam wonders if he could help find out who is behind the Paragon Project. Jack muses that they could use a trouble-shooter behind-the-scenes. Jack rejoins Ash and suggests that ‘Gabe’ keep an eye on the computer systems at Jabot and Newman. Ash scoffs that if the Paragon Project exists, she has an idea who is behind it and will be investigating herself. Jack tells her he’ll hire ‘Gabe’ as a special consultant. They bicker. He exits and listens at the door as she makes a dinner date with Joe.

Victoria meets Billy at her house. He grouses about Jack cheerleading for Gabe Bingham and calls him the Prince of Darkness. She laughs that he used to call her father that, so they’ve made some progress. Victoria talks about her meeting with Chelsea and reminds him it would have been their fifth anniversary today. They agree they’re back together and make love.

At the Dive Bar, Lily takes a call from Cane, who says a witness saw Hilary being carried by a man who matches Devon’s description. Lily excuses herself from Devon and debates with Cane about the plausibility of it. Michael gets on and says the eyewitness seems like the real deal. He wants Lily to find out from Devon what really happened. Lily’s angry. Michael says he’s just doing his job. Lily rejoins Devon, who feels guilty that she’s without Cane. Lily asks to go over his story. Devon demands to know what Cane said, so she tells him. Devon is very agitated. Lily asks him to be honest with her. Devon wonders how he’s supposed to convince a jury he’s innocent when his sister, her husband, and his own lawyer think he’s a murderer.

On the island, the eyewitness presses Cane for the reward money. Michael says they have to check out his story first. The man threatens to go to the police and leaves. Michael says he’s no longer answering his phone because the reward is complicating everything. Cane wonders if Devon offered it to slow down the process. The prosecutor appears – he’s spoken to the eyewitness.

At the boathouse, Neil realizes the saline drip is empty and implores Hilary not to die on him. He changes the bag and talks about how he saved her and brought her back to the dream house where they should have been living. He is going to get help.

Neil enters a supply closet at the hospital and tries to get at the locked up drugs. He steps out and runs into Gwen and her nurse friend, Emma, who tells him the closet is a restricted area. Neil lies that he was picking up a prescription and ducked into the closet to avoid a reporter.

At the Dive Bar, Lily leaves Michael a message that talking to Devon was a disaster. Gwen and Emma appear. Gwen says she’s sorry about Devon and Hilary. Lily snaps at her. Gwen mentions Neil being at the hospital for a prescription to help him sleep. Lily gets a call from Cane – he and Michael are in jail.

Adam meets Chelsea at Crimson Lights and says Jack is going to bat for him. She says her meeting with Victoria went well. He warns you can’t trust a Newman – present company excluded. Chelsea says Billy and Victoria are getting back together – she wishes they could be Mr. And Mrs. Adam Newman out in the open. Jack appears and tells Adam he’s hired – he has his first assignment. On the patio, Devon fills Neil in on the new eyewitness. Neil expresses support. Devon feels this is because of the hurt he caused Neil. Neil flashes to his encounter with Hilary and assures Devon he’s forgiven him. They discuss the investigation. Devon has nothing without Hilary, so might as well go to jail. He talks about finding whoever is responsible for hurting Hilary and making him pay with his life.

Lily tells Neil that Cane and Michael were arrested on the island.

Chelsea says to Adam, “We haven’t even been back a week and you’re lying to me.”

Phyllis runs into Ian in the woods at night.