Y&R Day Ahead Recap: Ian wants Victor to choke on his just desserts

Summary for Monday September 7 2015: Adam has a proposal for Chelsea, Sage’s doctor has concerns, and Esther makes accusations about Colin. 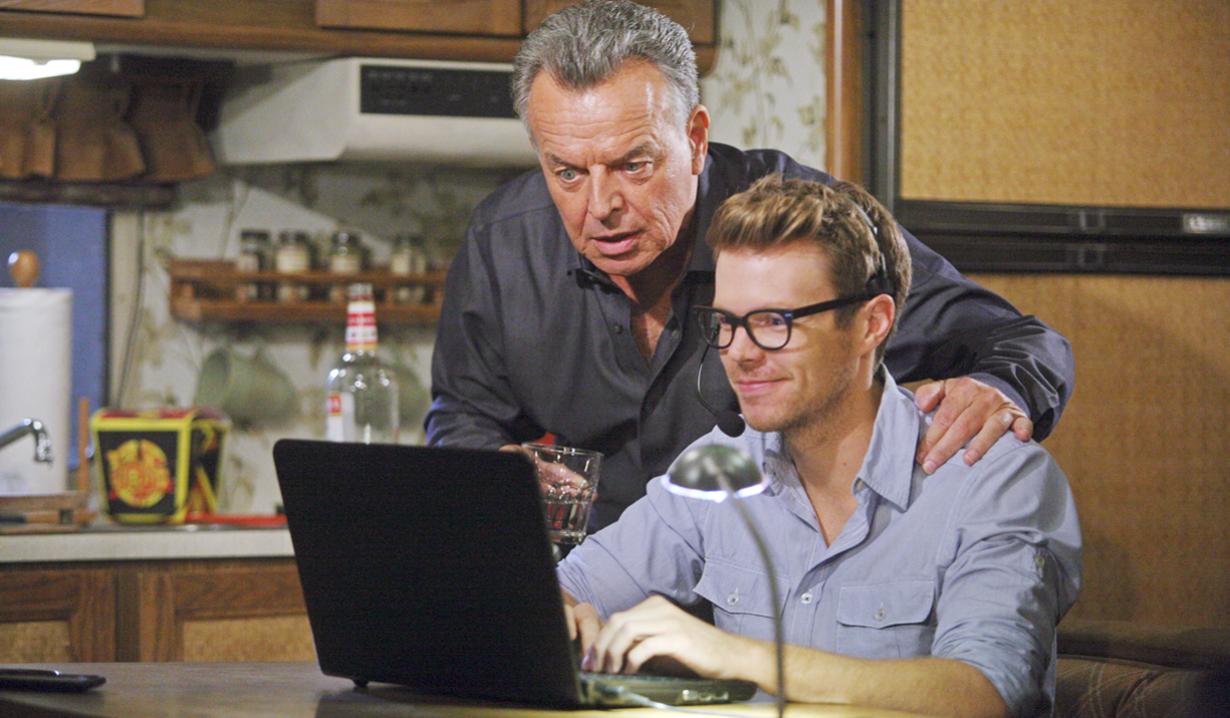 At Chancellor Park, Jill, Colin, and Esther wonder about the strange occurrences. Esther thinks Katherine wants them to know she is still with them. Jill prompts Colin to comfort Esther, who snaps at him, “Don’t you dare.”

Jill and Colin catch up with Esther at Crimson Lights. Jill wants to mourn together. Esther laments about a world without Mrs. C. Colin goes to the counter and Esther tells Jill that Colin made inappropriate advances to her while she was away. Colin returns and concedes he may have a playful manner of speech. Esther tells Jill how he hit on her while she was dusting in her maid uniform. Colin recalls it very differently. Jill giggles. They have another story with differing perspectives. Jill thinks Esther is lonely and she’s imagining things. Esther insists he pats her behind when he passes by. “Maybe your charms aren’t the same anymore, Jill.” Jill glares. They bicker. Esther says Colin goes or she does. Jill tells her not to let the door hit her on the ass. Esther feels Mrs. C would be ashamed of Jill. After, Colin asks who she will fight with now. Jill smiles. “You my love.”

At Newman Enterprises, Adam snipes at Ian Ward by phone that the virus is taking forever to download – he is the one who will get caught. Victoria arrives and Adam hides. Victoria calls someone about the power issue. A guard comes in and Victoria says someone must have been there, but she realizes there would be no surveillance footage.

In his unknown location, Ian talks to his computer geek pal about the luck of Gabe Bingham coming along – someone who despises Victor as much as he does. He chuckles that Victor can choke on his just desserts.

At the Club, Billy talks with Chelsea, holding Connor, about the strange blackout. Chelsea tells Billy that Victor sued for visitation rights. Billy advises her to get as far away as possible. Chelsea says she was going to, and they end up talking about ‘Gabe’. Billy thinks she should leave without him. When Chelsea says she talks to Connor about Adam, Billy assumes Gabe hates it. Adam appears and says he has no problem with it. Billy sneers about Gabe’s cosmic connection to Adam – maybe they’re two-of-a-kind. Chelsea steps aside with Connor. ‘Gabe’ tells Billy that Adam left behind a taped confession – he wishes he’d come forward sooner. Billy snarks back. Chelsea interrupts. Billy tells Gabe that Connor will always love his mom, “But who are you?” Adam tells Chelsea he’s right.

At the hospital, Nick apologizes to Sage for her worrying about Victor. He reassures her that no one will take their baby away. Sage is terrified the power going out was a sign. Nick soothes that it will be okay. Outside the door, Victor and Nikki confer when Abby appears. They tell her there are concerns about Sage and Nick’s baby. Victor harasses the doctor and Stitch when they appear. The doctor goes in and tells Sage and Nick everything is fine but she’s putting her on bed rest. While Nick ventures into the hallway, Sage talks to the baby until Victor enters. Nikki follows as the baby kicks Sage, who asks for time to rest. They rejoin Nick, who’s been joined by Victoria. Victor’s offer of nursing help at the ranch is refused. Stitch and the doctor take Nick aside – the doctor wants Sage to see a therapist who specializes in birthing issues. Nick goes in to talk to Sage, who has to stay overnight.

Victoria joins Billy at the Club bar. They chat about the power outage and Sage being hospitalized. Billy is determined not to say anything bad about Victor tonight – he doesn’t want a wall up between them. Victoria asks again if they’re back together. Upstairs, Adam tells Chelsea that ‘Gabe’ is her boyfriend, not her husband or Connor’s father. “I want to be your husband.” Chelsea smiles. “Is that a proposal?” After, Adam gets a call from Ian who says the digital worm is burrowing like a champion. Adam says he’s pleased, but looks concerned.

At the Chancellor Estate, Esther tells Katherine it’s time for her to go out on her own – she’s going to make her so proud.

At Chancellor Park, Victor tells Nikki he loves his family more than anything; he didn’t have one growing up. Nikki says he can be so tender sometimes. They make amends about Neil and embrace.

Cane meets a man who saw what happened to Hilary.

An island police officer tells Michael to convince his client to return and turn himself in.

Jack tells Ashley he made a deal with the devil. She hopes it’s not Victor.

Y&R Day Ahead Recap: Person behind...