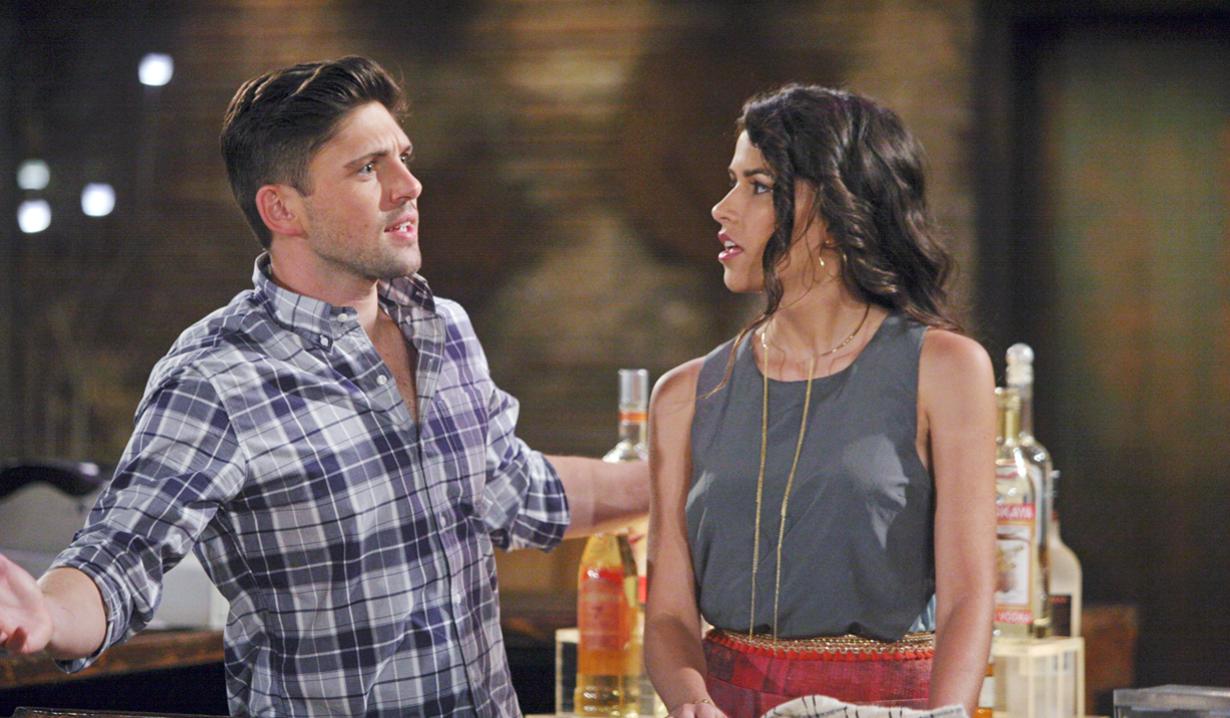 At home, Sharon tells Dylan she’s been acting strangely because she’s been keeping something from him – she went off her meds for a few days. She admits to being spooked by some information she read saying they could be harmful for the baby. Sharon says Mariah called her on it and she’s back on them. Dylan thanks her for being honest. They kiss.

In the park, Sage and Nick talk about their wedding. She thinks she got off on the right foot with Victor. Nick expresses support. Sage can’t wait to have his baby. They kiss. Nick gets a call from Dylan about Sharon.

At the Club, Nick fills Dylan in on some of Sharon’s history. He figures she’s feeling vulnerable. Dylan thinks that could trigger an episode. Dylan worries that Sharon still thinks he proposed only because of the baby. They need to trust each other.

At The Underground, a check has arrived from Victor. Marisa tells Noah she never considered Victor’s offer. Victor appears and says she most certainly did. Marisa tells Noah he’s lying – she wanted nothing to do with his spiteful gesture. Victor admits to offering her money, but insists she didn’t say no. Marisa didn’t waste her breath. She rips up the check. Noah tells Victor he doesn’t need protecting. Victor warns she’s dangerous and leaves. Noah asks Marisa why Victor would send the check. She says it was to make him doubt her. She’s had money before, but not what she has with him. She’s about to leave but he kisses her.

At Crimson Lights, Chelsea tells Anita that Victor’s offer was all about controlling her, and where she raises Connor. Anita counsels her not to upset Victor and questions her about Gabe. Chelsea loves him. Sharon appears and admires Connor. Chelsea is happy for her and Dylan; she knows how important being a father is to him. Sharon gets on the phone with Mariah to brief her on the lie to Dylan about her meds. In her purse is an ovulation prediction test.

At Newman, Adam listens to Victoria’s phone conversation and then muses that she’s still paranoid that someone is out to get Victor. They bicker about why Victor cares about Chelsea’s company. Adam tells her to think, as a mother, about the position he’s putting her in. Victoria says its business. Adam grouses that it’s personal. Victoria sniffs that he doesn’t know her father. Adam calls her a Victor Newman apologist. Victor arrives as they bicker and tells Victoria not to bother. Adam and Victor butt heads about what will happen with Chelsea. After, Victoria asks Victor if he’s going to take Connor from Chelsea. He denies it, but he doesn’t want Gabriel influencing her to take Connor to Paris. Victoria warns that Gabriel hates him and is a threat.

At Jabot, Jack questions Ashley after hearing she had him investigated. Billy reminds him of his recent questionable behavior. Ash and Billy wonder if Jack made Ash CEO to free up time to run the Paragon Project. Jack expresses outrage. Ashley asks why he’s there. Jack wanted to help with the transition. Ash complains about the shady bidding process for Chelsea’s line and assures him she’ll take it from here. She exits. Billy questions Jack handing over the reigns. Jack lost his taste for fighting. Billy warns he’s got his work cut out rebuilding trust, but he’s there for him. Once alone, Jack packs, looks at a photo of John, and starts writing Ashley a letter.

Adam joins Chelsea and Connor at Crimson Lights. Anita takes Connor to the counter. Adam tells Chelsea he unsuccessfully appealed to Victoria. Anita hears him say they need to find someone who can intercede with Victor so he doesn’t influence how they raise their son. She is encouraging. Adam and Chelsea decide to head back to Paris. A notary appears – Victor has filed a petition for visitation and they can’t leave until it’s resolved.

Ashley arrives at Newman and tells Victoria and Victor she realizes them keeping Chelsea’s line is all about Connor. Victoria exits. Ashley tells Victor she’s CEO of Jabot. Victor beams – just when he thought the day couldn’t get better.

At the Dive Bar, Victoria and Billy briefly discuss Chelsea’s line and then talk about whether they’re back together. Victoria asks, “Are we?” Downstairs, Victor baits Jack about him stepping down. Jack says Ash has investigated his Paragon Project – he brought Marco here based on paranoia. Victor warns if it’s not an Abbott behind it, someone may be after both of their companies.

At home, Dylan talks to Sharon about having no secrets. He assures her he loves her, and is not with her because of the baby.

Sage arrives at The Underground as Noah and Marisa kiss. Noah goes downstairs. Marisa fills Sage in on Victor’s bribe and the resulting upheaval. She is warning her about Victor when Nick appears. After, Nick tries to reassure Sage, who is worried Victor will want to push her out of the way once the heir is born.

At Jabot, Ashley tears up that Jack left her John’s photo and a note.

Neil says, “It’s quite possible you might never get to the bottom of this Devon.”

Sharon tells Mariah she’s not going to have to lie anymore. “I’m pregnant!”

Victor hollers at Adam, “When I win that court case, you will not see that boy again!”