Soaps.com Chats with The Young and the Restless’s Daniel Goddard! Part I

Soaps.com: How does Cane feel about Billy these days?

Daniel: From an acting point of view, Cane's got a thing with Billy that I've created for him that is my impetus for every emotion I have toward Billy. I doubt they'll ever address it, but from my point of view I think it fuels every reason he has to feel toward Billy the way he feels. Billy Miller plays Billy Abbott really well, and it's interesting to see how well the writers will choose to develop the Billy/Cane feud. I think Billy's moved on to the whole Nick/Victor/Adam side of the fence, which leaves a lack of Billy/Cane interaction which I thought would work effectively, and was very popular with the fans, so they might bring it back. Billy and I work really well with each other. We had a good one-year storyline that allowed a lot of possibility to build between the Lily problems, the Cordelia stuff, and then Jill, finding out about the mother, and Jabot. The set up is there, and the history is there, so whether they [the writers] choose to capitalize on it or not is up to them.

Soaps.com: It shows a side to Cane other than as a romantic lead.

Daniel: Exactly! And that's what I like too. I'm hoping [for more of that] when the deportation story is resolved. In my logical mind, the only way you can resolve it is by giving Cane a paternal parent. Once you cross the INS and they say you're no longer allowed to be here, there's not many options you have other than to say, "One of my parents is a legal American, therefore whatever you say doesn't matter because it's my birthright."

Soaps.com: Is that a hint?

Daniel: No, I wish it was a hint! There are certain things I look at in story set-ups and payoffs and concepts, that make me believe it could go in that direction, but I don't know. That's my hope.

Soaps.com: Who could be Cane's father?

Daniel: Naturally something that connects Cane back to Billy would be very strong and would allow a massive amount of feuding. Cane, to me, is the sort of guy that he will love you to death if you are an honest, sincere person with him, but if you cross him he would hit you in the back of the head with a piece of pipe just to say, "Don't cross me." I think those characteristics have always been there, but whether they choose to bring them out again is a different story. I think you've got Adam now, carrying the shoulder of all Machiavellian evil, and Billy doing everything that’s saucy and virile that you can imagine [laughs], and you've got Cane being the romantic lead and taking care of what's right and not much else.

Soaps.com: So, you're interested in developing Cane's other side.

Daniel: Oh, definitely. That gives you a full-fledged multi-dimensional character.

This interview continues in Soaps.com Chats with Daniel Goddard! Part II, in which Daniel and I discuss the babies and he gives me some teasers about what's coming up for Cane! Go now! 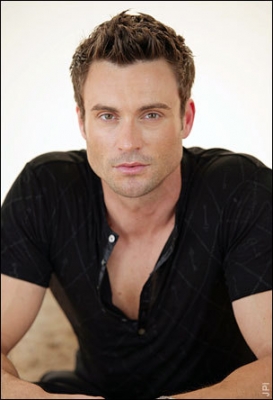 Soaps.com had the pleasure of speaking to The Young and the Restless‘s awesome Aussie, Daniel Goddard, recently. We dished about his character, Cane Ashby, the storyline, the babies, and lots more! Check it out!

Soaps.com: Can you give us some insight on what was going through Cane’s mind as he made the decision to bring the lawsuit against Mackenzie (Clementine Ford), knowing that it would be unpopular, and was against Lily’s (Christel Khalil Hensley) wishes?

Daniel: I think the most unpopular choice Cane’s ever made was trying to get custody of Cordelia, which I played with a strong conviction, and I realized it wasn’t a very strong way to play the storyline, so this time around they at least gave me a stance which was morally and ethically accurate. The great thing you have being an actor is experience; when you’re married in real life and have babies in real life, and your character is asked to make a choice [such as Cane’s], you have the experience to call upon. I think for Cane in this aspect, although he had never experienced those things, I understand the necessity, completely, to keep your partner alive. Both my babies had amniocentesis; we did it, so I also understand, going back into the storyline, that the percentage of losing Lily is greater than the percentage of losing a child. As a male, you have to play the odds.

Soaps.com: Lily said on the stand that the babies weren’t as real to Cane as they were to her at that point. Do you think there is truth to that?

Daniel: I do. I remember with both my babies, predominantly with the first one, [as a male] when your partner is pregnant with the first child it’s such a foreign concept – you can’t emotionally connect with the child because you don’t have the tools. So, at that point, the babies weren’t real to Cane, from that point of view, but at the same time I think most emotionally developed male adults have the ability to understand rationally that the child is coming into the world, so it’s real in that aspect. So, I completely agree with that; that was a great piece of dialogue.

Soaps.com: The writers made a point of having Billy (Billy Miller) blame Cane for Mac going into early labor, so will they play that point through? Will Cane be experiencing guilt if the preemies don’t thrive?

Daniel: No, I think the way it was structured, that was probably the deepest part of the pool, and from there we reach the continental shelf and the beach that’s beyond. No, I don’t think so.

Soaps.com: So, it was more a beat in the Billy/Cane relationship.

The Young and the Restless Saturday Teaser Poll: Fateful Decision

The Young and the Restless Video Promo: Doubts!