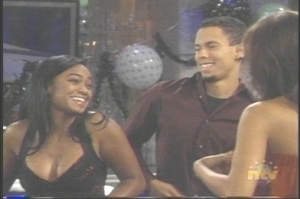 Fans of The Young and the Restless are about to get a treat in September when Tatyana Ali (Ashley Banks of The Fresh Prince of Bel-Air) makes a pit stop in Genoa City! Without giving away the storyline, we can tell you that Tatyana will appear as Roxanne and will be somehow connected to Devon Winters.

Since leaving The Fresh Prince of Bel-Air after the show called it quits in 1996, Tatyana has appeared in many films such as, Back in the Day, The List, Glory Road and most recently, Hotel California. She also released an album in 1998 titled “Kiss The Sky,” featuring her hit singles, “If You Only Knew” and “Kiss the Sky.”

Soaps.com wants to be the first to welcome Tatyana to daytime! Although we can’t be sure how long she’ll be around, fans can definitely catch her on the show on September 17 and 18, 2007!