Soaps.com Chats with The Young and the Restless’ Doug Davidson: Part II

Soaps.com: What motivates Paul to continue to support Patty?

Doug: I think there is a huge amount of guilt that Paul feels burdened by because he was involved with his own stuff when his sister needed help years ago. She had left town, disappeared, and he didn't hear from her. He looked for her but never really found her. Patty was a confused person. Now, I think the fact that Paul's mother is older now and can't really deal with these kinds of stresses, it was also a factor where he needed to step up. Paul honestly believes that Patty is ill. She was manipulated and drugged and toyed with by Adam and Victor, plus on her own. I think she is now where she can get the help she needs, but she's still being manipulated. At what point do you give up on a loved one? For Paul, he's not going to give up this time.

Soaps.com: We definitely look forward to seeing how that storyline continues to unfold, as well as seeing what else is ahead for Paul Williams. I heard Lauralee Bell is coming back as Christine Blair. Any chance we're going to see Paul and Cricket hook up like in old times?

Doug: [laughs] Lauralee sent me an email yesterday, actually! Her first taped show is on June 11. I'm really looking forward to that. She and I worked together for about 12 years on a daily basis. She is really, really fun to work with. A real joy. And Trish (Cast, Nina Webster, Y&R) is back, too. It'll be fun to have the two of them to reminisce with.

Soaps.com: Any chance of a Cricket-Paul-Nina triangle? [laughs]

Doug: [laughs] I don't know yet! I haven't received any news on what's going to happen. Because it's been a while, they might have to re-establish our relationship in some flashbacks. I'm guessing Lauralee's last day was somewhere back in '03-'04. A significant amount of time has passed.

Soaps.com: Any other teasers you can give us about what's in store for Paul Williams?

Doug: I guess that would be the one that is directly on the horizon. The other one would be a set of circumstances that puts Patty again in jeopardy, being manipulated by an outsider. If you think about it, I've given you enough of a hint to figure it out. That should all come to fruition in the next couple of weeks or so.

Soaps.com: Let's take a look back at your career with Y&R, an amazing 32 years and counting. What are some highlights for you in terms of people you've worked with and storylines you've been a part of?

Doug: If I just close my eyes and hit on a few ... I think, firstly, getting the part out of nowhere. Or at least, from my perspective, out of nowhere. If you believe in a master plan, then it all makes sense, especially in retrospect. Getting on the show and then when Bill (Bell, Creator of Y&R) decided to bring in my family in 1980. The show went to an hour and he totally committed to my character. Then there was April/Heather, and then the mob story, and then Lauren. When Cassandra came in '86 or so, that was my first adult story line. Bill had transferred Paul from a juvenile lead into a lead male. That was exciting and fabulous. Then Bill paired me up into a relationship with Lauralee, and then they brought in Eva Longoria. It just goes on and on and on. For me, the bumpiest ride was after Lauralee left and Bill stepped down, and we went through a series of different head writers and executive producers. That part, for me, has been the slippery slope. You don't know what they're thinking or how they're thinking, and decisions are being made by groups of people. You don't really know who's driving the ship.

Doug: I think we had a very clear vision when we had one man, one leader who created the show, and saw a certain flavor of how he wanted it. He was incredibly specific. He was kind and loving and at the very same time really really tough, and expected your “A” game every single time. Now we have a cast of thousands. They try to touch on a bunch of different flavors. I don't know if that's just a change in television style. Then you look at the budget constraints. We're moving at such a rapid pace, that honestly, you get one chance at it. If you don't cuss, they buy it [laughs]. It'll be interesting to see when Lauralee comes back, to see her observations when she comes back.

Soaps.com: Has anything stayed the same?

Doug: It's still the same family, for the most part. We're still trying to put on the best show that we possible can with what we're given, in terms of time and money. The desire is still there. We're still trying to stay on the air and put out the most entertaining show. There are no evil-doers that are trying to bring the show down. We've just got a series of different opinions of what people think is best and what they find entertaining. It's probably harder on people like me and Melody (Thomas-Scott, Nikki Newman, Y&R) and Jeanne (Cooper, Katherine Chancellor, Y&R) and Eric (Braeden, Victor Newman, Y&R). We've been there the entire time. The horde of newcomers have no recollection of what it used to be.

Check out Part One of Doug Davidson's interview with Soaps.com. 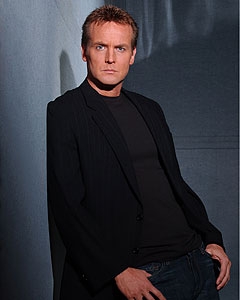 “I open myself up and trust in those feelings that lie quietly in most people. It requires an inordinate amount of focus, because in seeking that truth, you’re lying about the reality.”

In Part II of our exclusive interview with The Young and the Restless veteran Doug Davidson, Soaps.com chats with Doug about his current storyline, favorite Y&R memories over the years and the possibility of a new love triangle between Paul, Nina and Cricket!

Soaps.com: It’s been an absolute blockbuster year for you and your character Paul Williams. The storyline with Paul and Patty has been at the forefront since last August. When you got the material to work with last year, did you know that it would blow up into something so huge?

Doug: I had absolutely no clue. At that point, I was thinking that Paul’s breakup with Nikki was going to be my emotional beat this year. I was given a scene where Patty reveals in her hotel room that she’s not Mary Jane Benson. I read it and I didn’t really get it at all. I had a hard time identifying what type of reaction it would cause. They had audio playbacks in it and it ended with Paul screaming, “oh God no!” A “no” with a lot of “o’s” at the end. [screams] NOOOOOOOOOOOOOO! [laughs]

Doug: I even had my wife Cindy read it because I didn’t know what the heck [the show] was looking for. There wasn’t a lot of dialogue. There was stuff leading up to it where Patty kind of takes control and then finally gets a knife. It’s one thing when you have a normal brother but it’s another thing when your brother is a private investigator and is used to working with law-breakers. I guess I made the assumption somewhere in there that, in the back of my mind, I knew that this woman wasn’t what she was supposed to be.

Soaps.com: How did you two work that scene out?

Doug: I was lucky enough to be working with an actress like Stacy, who’s just so great. You really get into a scene with her. You hang onto her sleeves and it all goes from there. There was some physicality she had to do that most women have a hard time doing, meaning they’re just not used to doing stunts. Stacy handled all the stunts. She was able to break all the props that were to be broken and not break the ones that weren’t. We just got into the scene and let it fly. At the end of it, it was like, “oh God, what just happened?” But the producers pretty much left it the way it was and I guess that started the ball rolling of that renewed relationship with Paul and Patty.

Soaps.com: Let’s talk about those emotional scenes that you do. Where do you go as an actor to bring yourself to the rage or tears that you communicate on-screen?

Doug: For me, it’s about the truths. I need to be somewhere that character would be. For this particular scene, it was a “worst-case scenario, realized.” You have to be so open and follow those little wisps of feelings that usually sane people would filter. For me, I open myself up and trust in those feelings that lie quietly in most people. It requires an inordinate amount of focus, because in seeking that truth, you’re lying about the reality. It’s a story. You’re playing pretend with really high stakes.

Soaps.com: Some of the viewers on our Soaps.com message boards are wondering if and when Paul will ever stop being so consumed by Patty. Realistically, she’s shot Victor, taken Colleen hostage which ultimately led to her death, switched places with Emily and recently even attempted to kill Emily. During the whole Patty/Emily switch, though, Paul made the decision to not have a DNA test conducted. How did you feel about this move? Take us into the mind of Paul Williams and give us some insight as to what he’s thinking.

Doug: I’m going to start right at the DNA test. Before Patty made the switch, she had started pretending that she was Emily. She had already copied Emily’s looks even before she made her return to Genoa City. The fact that Patty was already pretending in the hospital to be Emily, to me, when she finally made the switch, I just wrote it off as, “she tried to kill herself and now she’s going back into thinking she’s Emily.” So it all just seemed genuinely crazy to me. The fact that she wanted me to run a DNA test was kind of silly. So I found that easy to validate.

The Young and the Restless Saturday Teaser Poll: Looking for Family!

The Young and the Restless: A Look at David Hasselhoff as Snapper! Updated!