Soaps.com chats with The Young and the Restless’ Doug Davidson: Part I

Soaps.com: Which reel did you submit?

Doug: The reel I submitted for the Emmys was where I find sanctuary for Patty in the church and try to hold it all together. Patty's kidnapped and it all falls to pieces around my feet. I get into an argument with Detective Chancellor and end up in jail overnight. The show I submitted was the one where I make bail and go over to the Newman ranch to confront Victor that he's toying with a human life, at what cost, in order to get even with Jack Abbott. I chose this one because I thought it was a myriad of emotions where there's anger, there's hurt and there's the fact that it's so unbelievable that someone would go to such costs to get even.

Doug: Second nomination in 32 years. Not a great average. I wouldn't want to be a professional ball player with that! [laughs]

Soaps.com: [laughs] Well your nomination this year is without a doubt so well-deserved. Explain to us what goes through your head the moment you find out you've been nominated for an Emmy.

Doug: For me, there are two aspects to it. Inside every person lives a sense of self and you have a philosophy that you should be a member of a community. But it is nice to be singled out when you give the best report in class or when you do really well at work and you're the employee of the month. There's that person that lives inside of everyone that is flattered when something like this happens.

Soaps.com: How do you strike the proper balance between the two?

Doug: I try not to overemphasize that ego inside of me, because to me, it's so carnivorous. It's not always healthy to have that kind of ego when you have interpersonal relationships that mean more to you than anything else. The people I work with, my family members and my friends, we all have different paths, different goals and different abilities. All that being said, still in the back of my mind is that it's nice to be recognized. I felt pretty good about my submission this year. I had three or four that I was choosing from and I had family and friends help me. So, as you can see, in trying to be selfless, there's still that energy behind you that would like to close the deal.

Soaps.com: You must feel a little nervous throughout the entire process.

Doug: I had a little bit of anxiety going into it the night before the nominations were coming out. But I said, “you know, whatever happens, happens.” And then I woke up at 3:30 in the morning and couldn't get back to sleep. [laughs] And my wife was awake, as well. My anxiety spread over to her side of the sleeping chamber. [laughs] A couple of hours later and the phone rang. It was my executive producer Maria Arena Bell, and another producer, Josh O'Connell, informing me that I was indeed one of the five names that were chosen to be a nominee for Lead Actor this year.

Soaps.com: You must have been fired up!

Doug: I was ecstatic and overjoyed. When you're honored like that, you're humbled as well. What happens, at least to me anyway, is that you realize how many people were so significant in your path to this day of recognition. It's hard to say just the people that are employed by our show now, because it really is a path and a journey. I learn lessons every day from all kinds of people and I hope that I'm able to share my knowledge with others, too. Anyway, the process was angst-ridden but I had a happy ending this time. A happy chapter. We'll find out the ending on June 27.

Doug: Las Vegas! Where it's easier to drown your sorrows. Or celebrate! [laughs]

Soaps.com: Your fans are wishing you the best and are definitely rooting for you, Doug!

Doug: Thanks so much. I really appreciate the kindness, and really, that's the fun of being in something that's a creative endeavor. You get to touch people, and they get to touch you. It's a shared experience.

Join us on Monday, June 7 for Part II of our exclusive chat with Doug, where he discusses his current storyline, favorite Y&R memories over the years and the possibility of a new love triangle between Paul, Nina and Cricket! 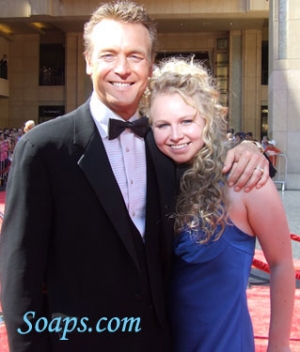 “In trying to be selfless, there’s still that energy behind you that would like to close the deal.”

Soaps.com recently had the opportunity to sit down with The Young and the Restless star Doug Davidson, who plays the all-around good-guy private investigator, Paul Williams. Read on for Part I of our chat with Doug, where he discusses the nomination process for the Daytime Emmy Awards as well as his reaction to being nominated as this year’s Outstanding Lead Actor.

Soaps.com: First off, congratulations from all of us at Soaps.com on your Daytime Emmy Award nomination for Outstanding Lead Actor!

Doug: Thank you! I’m very excited. It’s really a thrill. The entire Membership of the Academy voted on the pre-nominations so I was quite happy and flattered to realize that I had the support of my fellow community.

Soaps.com: For those who aren’t quite sure about the whole Emmy process, can you tell us a bit about how pre-nominations and nominations work?

Doug: When you’re pre-nominated, they have a list of everybody and every category they’ve submitted themselves in. All your lead actors go in one category, your lead actresses in another, all the way down to younger lead actor and actress. This year, the entire list of all those names went out to the Membership of the Academy and you were able to vote for whoever you felt was worthy. From that list, they picked two nominees in each category from each show. These individuals were then able to submit one show on a disc that went out to the judges. I think we have 22 judges on a blue-ribbon panel that look at all the reels. They label the reels 1-5 and that determines the nominees. This year, there’s no other vote, so the number one vote-getter is the one that receives the Emmy award.

Soaps.com: So the process changes often?

Doug: It really does. It’s a difficult process to determine who is better than somebody else. What it really comes down to is the kind of year you’ve had. The people who are on the panels are supposed to be in touch with most of the shows. It should be an informed panel of judges. Then they take their personal opinion and say, “the performance in this episode, in my opinion, was the best one.”

Soaps.com: How do you decide what goes on the reel that you submit?

Doug: The face of daytime has changed quite a bit. We used to be able to submit two shows, but now it’s just one. But the structure of our shows has changed dramatically, too. The scenes are shorter, there are more characters in every episode and there are group scenes. It’s really harder to choose than you would think. The untrained eyes think, “oh you had a great year!” But then when you have to pick one show that has a definitive moment that exemplifies the kind of work you’ve been doing, it’s harder than it seems. I mean, sometimes you have a standalone show. Christian (LeBlanc, Michael Baldwin, Y&R) had one last year, and this year Billy (Miller, Billy Abbott, Y&R) got one. Those are no-brainers.

Soaps.com: And for the rest of the community?

Doug: For the rest of the community, you’ve got to kind of time it right. An episode that Stacy (Haiduk, Patty Williams, Y&R) picked was the culmination of her story but probably didn’t show all the levels that she could play. Consequently, she wasn’t nominated. And in my opinion, she should be! Or someone like Eileen Davidson who had a great year but didn’t make it to the pre-noms. It’s hard to explain but people are overlooked all the time. It’s a definitely flawed process but when you’re on the receiving end that I have been blessed to be on this year, it feels great! [laughs]

The Young and the Restless Snap Poll: Frenemies!

The Young and the Restless Saturday Teaser Poll: Looking for Family!