Soaps.com Chats with The Young and The Restless’ Amelia Heinle!

Amelia: It’s really not that difficult. It’s really not intimate on the set. When the viewers are watching, it seems so intimate. On set, it’s not intimate at all. Everybody’s there, and it’s all choreographed. Well, except when Billy and I work together … we’re so clumsy! There’s nothing really that sexy about it. For Thad and I, we know it’s a job and we see it like that. I’m sure it’s caused problems between couples before, but for us, it all just works out.

Soaps.com: Let’s get inside Victoria’s mind. Take into account her past history, her current divorce to J.T and the fact that she’s headed into Billy’s arms. What is Victoria Newman thinking and feeling right now, at this very moment?

Amelia: I think sometimes in life you’re going through things, and you act out. With Victoria going through a difficult situation, like the divorce with JT … really, on a soap opera, if you want to try and make it real for yourself, you think, “oh my gosh, my character’s actually been married like 15 times!”[laughs]

Amelia: [laughs] Each time, you have to figure out a way to make it real for yourself, otherwise it gets silly, you know. But Victoria’s probably thinking she’s been through so many things. At this point, she’s got a child now. And as far as Billy goes, it’s something new and exciting and different. He’s like the forbidden fruit. Maybe right now in her life she’s going through a little bit of a mini-crisis, being that she’s getting divorced again. And maybe this is just something that’s exciting, like riding on the back of a motorcycle, or doing something dangerous. I think that’s what’s going through Victoria’s head.

Soaps.com: Any chance you’ll give us a sneak peek about what’s in store for Victoria?

Amelia: There’s a bunch of twists and turns coming up that are interesting! It’s often all a surprise to me, too, because the show keeps things so quiet. I got my script yesterday (Monday) for the show we’re shooting on Thursday.

Amelia: I know there’s going to be more Billy and Victoria. I don’t know exactly where they’re headed, but I know it’s going to be interesting and fun! It’s like forbidden love, kind of like Romeo and Juliet, and I think that’s what they’re going to be doing with our characters. For a little while, anyway, which I think people will like. A “push me away, pull me back” sort of thing. 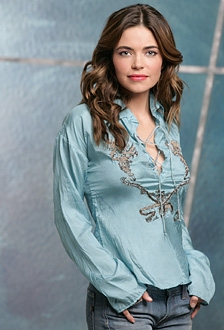 Soaps.com recently had the opportunity to catch up with The Young and the Restless star Amelia Heinle, who plays the sometimes headstrong, always family-oriented Victoria Newman. Read on to see what Amelia had to say about fighting with co-star (and real-life husband!) Thad Luckinbill, getting intimate on set, Victoria’s future with Billy Abbott, and much more!

Soaps.com: I hear some “Happy Belated Birthday” wishes are in order! Was it your birthday recently?

Soaps.com: And congratulations to you and Thad (J.T. Hellstrom, The Young and the Restless) on the recent addition to the Luckinbill family. Tell us a bit about your new baby girl.

Amelia: Thank you! Her name is Georgia March Luckinbill, and she is almost 4 months old now, and she’s perfect! [laughs]

Soaps.com: So many fans have enjoyed how you and Thad have had a storybook romance, both in reality and on-screen as Victoria and J.T. How does it feel now that you’re taping divorce scenes with your real-life hubby?

Amelia: You know what? It’s fun! We don’t really fight at home that often. Everybody fights, but we fight very seldom. Maybe one of the reasons for that is because, when we come to work lately, all we get to do is fight! [laughs]

Amelia: I don’t know, I guess anyone who’s married would understand it. It’s kind of fun to yell at your husband. It’s like punching a punching bag!

Amelia: Yeah! It’s like, “we don’t need to go to a counselor. We have The Young and the Restless!” [laughs]

Soaps.com: I saw the two of you on the Newlywed Game a while back and you were just adorable together. It’s kind of nice to now see you guys attacking one another on-screen!

Soaps.com: While Victoria and J.T. drift apart, we see her inching dangerously close to Billy Abbott. How do you personally handle having to tape these new intimate scenes with someone other than Thad?

The Young and the Restless: Michael Graziadei Signs New Contract!

The Young and the Restless Video Promo: It's Time to Masquerade!