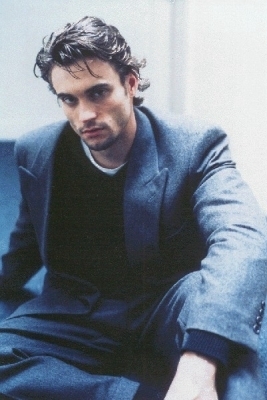 Cane decides not to press charges against Katherine! (Soaps.com)

Recently, Soaps.com was happy to find a lovely email of introduction in our inbox from Y&R’s Daniel Goddard (Cane Ashby, The Young and the Restless). Daniel had nothing but good things to say about Soaps.com, the layout of our site and the terrific fans! We were pleased when he requested an interview with us and hope that our readers enjoy getting to know Genoa City’s newest loved character!

Chrissi: The first thing we’re curious about is your schedule. A few days ago, we discussed why you didn’t have a myspace site up yet. You told me that you had been pretty busy. Why not outline a typical day for you?

Daniel: Firstly I would like to say hello and thank you to all of the fans on your site that have been so wonderful with their praise and comments. It’s a great feeling to know that Cane is so welcome on the show. Thank you! I love stopping by and seeing what is going on. You have a fantastic site and it is something that you should be very proud of.

A typical day starts with getting Ford (my 1 year old) out of bed. It is one of my favorite things to do in the entire world. He wakes up generally around 6am I make him a bottle and then he either gets into bed with Rachael (my wife) and I and we just hang out and play or we go downstairs have breakfast and play.

If I’m working that day I leave by 6:30 am to beat traffic get to work by 7:30 am. I like to figure my scenes out well in advance; I have always been like this. Once I know what the scene is about I am then able to learn the dialogue and figure out how it fits into the grand scheme of things. That being said I don’t start learning it that morning, but I start running it with Judd the dialogue coach when I get to work.

My days off are usually taken up with either family or other business things. Rachael has a product line called ‘Le Chic Chick’ it is basically everything a girl needs to know in a box. Le Chic Chick and another called Le Chic Home which is everything you need to know about decorating, styling and warming up the home. Rachael also has a design renovation business Paint Designer D’cor I like to build and do construction in general and so I help her with the business as needed.

I have some other side projects which are various stages of development or completion. One is a documentary that I Produced and Directed that follows a mother trying to save the life of the pedophile that killed her 6 year old from the death penalty in Louisiana. It is a sad yet heartfelt story about a woman who although her life that has been ruined has managed to find compassion and make a difference.

It is amazing how fast time passes by. I used to measure it by trash night. I’d say, “Wow is it Tuesday again?” now I measure it by getting Ford out of bed. The only difference is that every morning is a blessing because I get to see his face again.

Chrissi: Generally, how often are you in the studio, and where can you be found when not taping? For example, are you in your dressing room rehearsing with other actors, or hanging out in makeup?!

Daniel: I’m usually working on the scenes. I like to keep my head where it needs to be. But, that being said, everyone at the show is so much fun to hang out with. Everyone has such a great time in the make-up room. I think you’ll find on most productions it is the epicenter of the action. I joke with the Hair and Make Up guys and girls that this is where the real soap takes place, because you could walk in stressed about something and within seconds you are laughing your butt off.

Chrissi: Please, give us a low down on one day in the life, from working in the studio, to memorizing all those lines!

Daniel: The studio is fun. It moves fast. And everyone is on their game. We have a fantastic crew. True Pros. Every one gets on so well, and that made it easy for me to get up to speed. I am so lucky to work with such a wonderful group of people.

As far as memorizing the lines. I am but a novice, have seen some of my fellow cast mates read it a couple of times and have it down. I totally respect them for that. I think that is why they are so good at what they do. When I work with Jeanne and Adrienne I am in awe of how they learn their work.

Chrissi: The fans have fallen head over heels in love with Cane. Can you please give us a little insight into what makes Cain tick? Are you anything like your alter ego?

Daniel: I think Cane is the sort of guy that you would want to take a road trip with. He is fun and easy going. I think it is in his Australian nature. Like me, he grew up in a very laid back culture where friends and family were very important. But more than that, your word is your bond. Cane also has a great sense of humor. He can look at any situation and find the humor in it. Whether it's sardonic or ironic, he knows that most things in life come and go and this being said he tries not to hang onto the pangs of the past. At the same time however he is deeply emotional, once again this is something that he keeps to himself. His past has conditioned him to wear a thicker skin than others when it comes to certain things. This can at times prevent him from truly expressing how he feels. For the moment he is happy. Why wouldn't he be, he found his mum. I love Jess Walton; she is truly beautiful person inside and out. I am blessed to have this opportunity to know and work with her.

Now as far as where Cane is going? Well, who knows after all it is a Daytime! But doesn't that just make it all that more exciting? I just hope if he takes a couple of wrong turns that you can forgive him, after all everyone makes mistakes.

Chrissi: I wonder if that's a hint of things to come for Cane?! Fans have rushed to your character's defense regarding being scammed by Amber. What are Cane's thoughts about Amber, the marriage and what's going on for him in Genoa City? (Adrienne is such a great actress! Half of the Y&R board detests her character, so we think she should be pretty proud of herself for doing such a fantastic job!)

Daniel: Cane is complicated. That being said he is a people person. The kinda guy who would bend over backwards for a friend and protect all of his loved ones from their enemies. When JT rushed to attack Michael in Crimson Lights, Cane had to intercede and prevent JT from being hurt and Michael from having to deal with the ramifications of his actions, whether Michael's actions were justified or not.

Now as far as Amber scamming Cane. He doesn't know it is that simple. I think that the audience has to see it from Cane's point of view. That is to say when you are along way from home and you meet someone who seems to be a kindred spirit it is easy to form a bond with them. A bond which can easily lead to romance. I have read a couple of things on different boards saying that Cane must be stupid cause how couldn't he see that Amber is doing this and doing that, or wouldn't he catch on to the fact that he is being scammed by Amber when the immigration attorney calls her cell phone and not hers to talk about Cane's immigration status. Well, just for a moment see it from Cane's side: If Amber says she loves him and that she will marry him for a green card etc. Then it would seem logical that she would make calls to the Attorney on his behalf if Cane is at work and can't talk or has other things to do. I have a philosophy about the off screen lives of Cane and Amber and other characters on the show for that matter. Just cause they aren't on the screen it doesn't mean they aren't living their lives and doing their thing. Which means that they could have made up after a disagreement; had a disagreement or changed plan and tack regarding business and personal matters. Also you have to remember that Cane knows nothing of Amber's past other than what she has told him. He met her and like most people in the real world take the person on face value. I think that all of us have met someone who has not turned out to be who they initially portrayed themselves to be. I think it is all in a matter of time.

Finally as far as Amber not wanting to go to Oz at the last minute, I think that for Cane he understands that she has every right to have last minute moving jitters, and because of his compassion I think that it is easy for him to forgive her. Lust is blind (LOL)

Chrissi: Switching gears a little, we're not only getting emails from our favorite actors (sure, I'm kissing up!!) but we're also getting some frantic emails from daytime's Australian fans. As you can imagine, fans in Australia were devastated when the network canceled the Young and the Restless down under. What was your reaction to this decision?

What would you like to say to your Australian fans about the cancellation?

Daniel: Firstly, it is being moved to Fox. Fox has a cable network in Oz that will air it so the US equivalent would be leaving CBS to go to FOX. I'm doing 3 interviews on Monday for Oz media. At the same time it is a drag cause my Grandma is 93 and hasn't seen the show or me in a while and she was so excited to see it. But now I'll just have to get her cable. She is so excited.

Stay tuned for yet another exclusive interview with Daniel Goddard (Cane Ashby, The Young and the Restless) soon, where he'll discuss Australia, his new movie coming out and where he'll answer YOUR questions as asked in the Y&R message boards, which he claims to frequent and enjoy!

Again, Soaps.com wants to thank Daniel Goddard for taking the time to give us a shout and a scoop! You can learn more about Daniel and his career by visiting his website at: Daniel Goddard!

Joshua Is Here To Stay!