Will Tucker’s Young & Restless Return Bring Out [Spoiler’s] Dark Side? 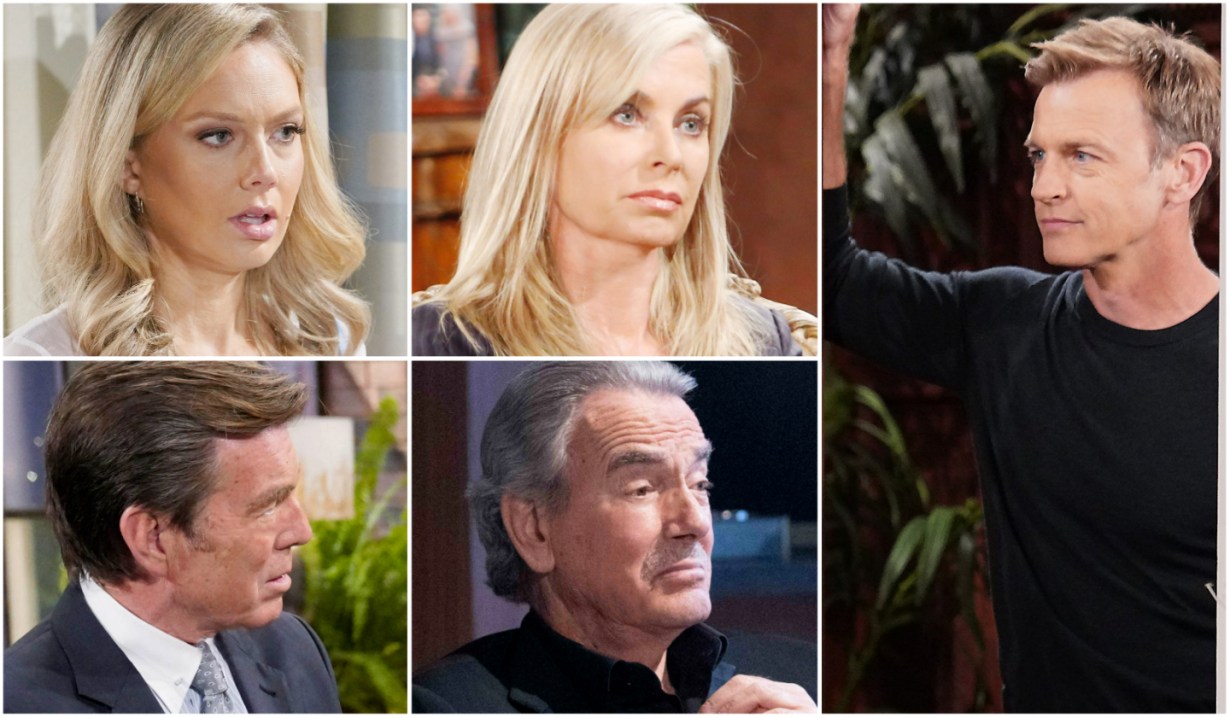 To say those two have a colorful history would be an understatement.

Brace yourselves, because we may be in for a bumpy ride on The Young and the Restless! Well, maybe we should amend that to a bumpier ride. Because according to spoilers, Abby’s about to have a shocking encounter with someone today, and we’ve got a pretty good idea of who it’s with! After all, there’s really only one person around right now who could give her any kind of unpleasant surprise — and that’s Tucker!

More: Tucker is about to blow up the Abbott family

Abby has never really been a Tucker fan. and went to some pretty extreme lengths to split him from her mother. She trashed their wedding venue, plotted to set Tucker and Diane up to be caught by Ashley so she’d think they were cheating and even drunkenly (and, admittedly, accidentally) ran the man down with her car.

Tucker wasn’t even expected to live after that until his mom willed him to breathe simply by virtue of being the force of nature that was Katherine.

After that horrifying incident, though, Abby relented, and even served as Ashley’s maid of honor in the wedding… but all that time in trying to convince her mom that Tucker was a philanderer wasn’t far off the mark. In the end, the two divorced after he cheated on her with Devon’s mom, Harmony.

Now he’s back and very clearly gunning for Abby’s mom again. What are the chances she’s going to look kindly on the man who proved her misgivings right?

And now, on top of that, there’s Dominic. His grandfather is a man Abby’s never trusted, never liked and who has an incredibly convoluted family history. Katherine never knew he was her son, and Devon never knew he was his father. 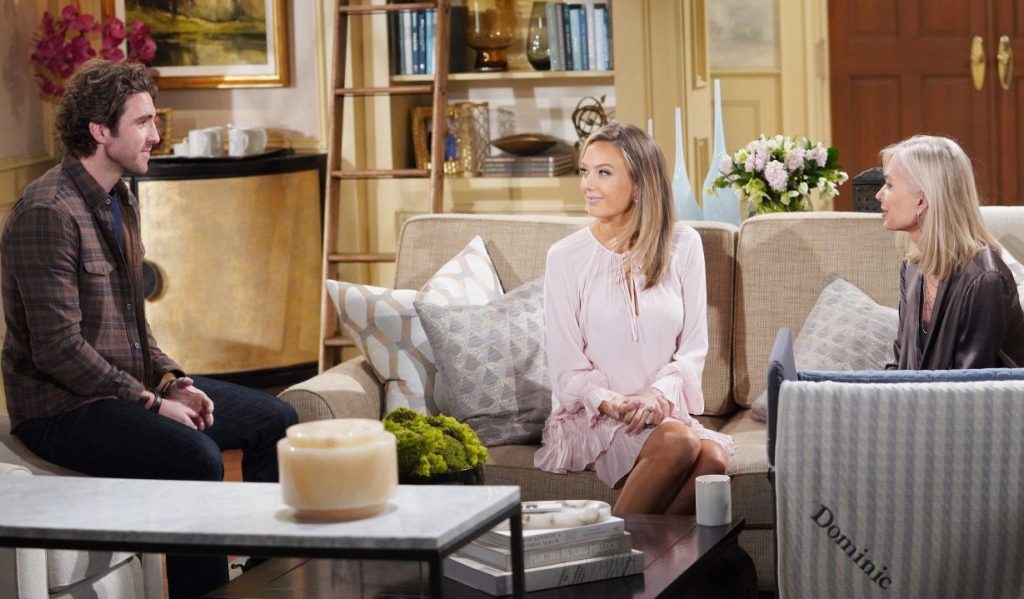 “What am I smiling at? Oh, just the thought of what I’ll do to Tucker if he so much as breathes near either of you.”

One of the first things Mariah wondered when she saw Tucker at the vow renewal was if he’d come back for Dominic. If she thought that, it seems like a safe bet that it’ll be one of the first things Abby thinks too! It’s probably not hard for her to imagine that now that he’s in town, he’s going to start pushing for a greater connection with his grandson.

Maybe he’ll even try to reignite a Devon push for more parental responsibility and, in some way try to recreate the family life Dominic’s dad and grandfather never had! Seem like a bit much? Not to Abby, a woman who’s quest to take Tucker down once nearly cost him his life.

Granted, nearly killing him was back in her Naked Heiress days, but that was also just a daughter trying to (kind of) protect her mother. This time, Abby’s a mama bear, and she has worked hard to keep her family together, through an adoptive father who struggled with parenthood and a biological father who wanted a bigger role in the tot’s life.

If she starts worrying even for a few seconds that Tucker could upend all that, we may get to see a side of Abigail that we haven’t in a long time. Now, though, she’s far more mature, confident and capable than the last time she sparred with the man. Who knows what lengths she’d be capable of to keep him at bay this time.

Relive the event that re-introduced Tucker to Genoa City with our photo gallery of Kyle and Summer’s grand vow renewal.

<p>There’s no doubt that <em>Young & Restless’</em> Summer took her husband Kyle’s breath away when she appeared in the Abbott garden wearing her Forrester Original wedding dress in trendy blush for their vow renewal.</p>

<p>Mariah, Noah, and Tessa decided to share the officiating duties when it became clear they all wanted the honor. They began the ceremony after Harrison adorably walked Summer down the aisle to meet Kyle for their vow do-over.</p>

<p>Noah told his sister and Kyle that they had shown him what love should look like. “Skyle” shared an intimate look as they exchanged personal vows at the ceremony in the Abbott garden.</p>

<p>Each of the parents gave a speech as part of the ceremony, including Diane, who was overcome with genuine emotion… despite her nemesis and hater-in-chief, Phyllis, looking on skeptically.</p>

<p>After the personal vows were out of the way and each of Summer and Kyle’s parents in attendance had stood up to say a little something, it was <em>that</em> time. The happy couple delighted the gathered guests with a romantic kiss to seal the deal.</p>

<p>This is the most fun Jack’s backyard has seen since the last Fourth of July barbecue, we’ll bet! The guests seemingly had a fantastic time, as evidenced by the joyful expressions and laughter from Nikki and Victoria on the big day. At least until…</p>

<p>A helicopter began buzzing overhead right as folks began celebrating. This left the bride, groom, and their guests holding tightly to their stylishly coiffed locks and looking upward in confusion. It wasn’t long until they got some answers…</p>

<p>Tucker McCall was the interloper who made a big entrance at the Abbott family celebration. Claiming he was looking for his ex, Ashley, Tucker stunned onlookers by gifting the bride and groom with the keys to a Bentley… perhaps the one Diane was seen in during her time in Los Angeles? Things that make you go, “Hmm.”</p>

<p>Kyle and Summer posed for an official vow renewal wedding photo and boy did they look good! The lovebirds are smiling and positively glowing.</p>

<p>In this joyful shot, Summer and Kyle embody the essence of marrying your best friend. How can you not love this?!?</p>

<p>These two not only love each other, but support each other. We hope they’re still able to do this when things become even messier between their mothers, Phyllis and Diane. You <em>know</em> it will!</p>

<p>Prior to the wedding, Nick assured Summer he was fine with Harrison walking her down the aisle and gifted his daughter with a bracelet with the letter ‘S’ on it… not for ‘Summer’ but for ‘Supergirl’. Awww.</p>

<p>Summer’s mercurial mom was on her best behavior at the vow renewal, even if she did give Diane and Jack the hairy eyeball and went off to whisper with Nikki a couple times. She shared a close moment with her daughter before the ceremony and gave an emotional speech.</p>

<p>Kyle grew up believing his mother had died, so it’s fair to say he never dreamed he’d be able to have a photo with both of his parents at this wedding. Thank goodness he lives on a soap where faking your own death is par for the course. Viva Diane!</p>

<p>Diane was clearly emotional to be included in her son’s special day after staying away for so long and winning his forgiveness. She made a heartfelt speech ahead of Kyle and Summer being pronounced husband and wife for the second time.</p>

<p>Get a load of the absolutely beautiful, elegant wedding cake prepared for “Skyle’s” vow renewal. Did Mrs. Martinez whip this up? If so, she’s got mad skillz!</p> 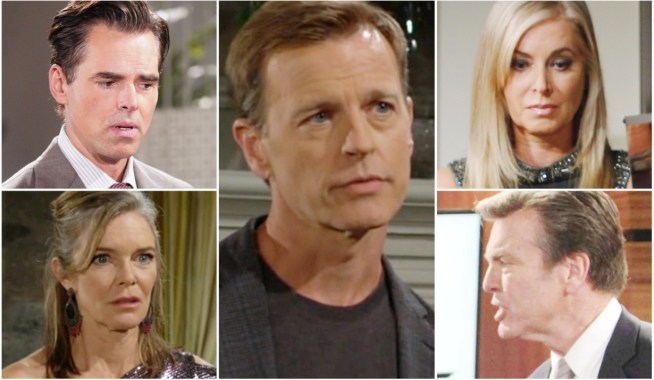 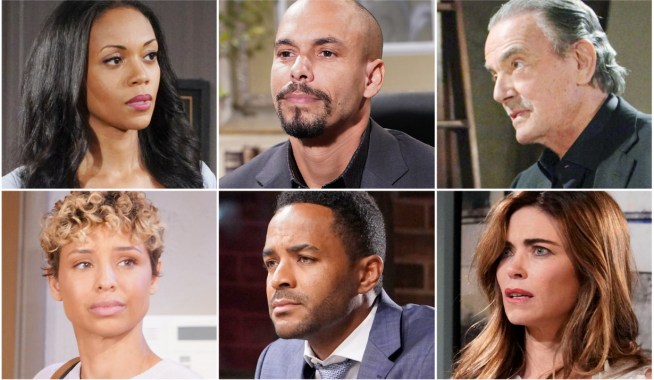