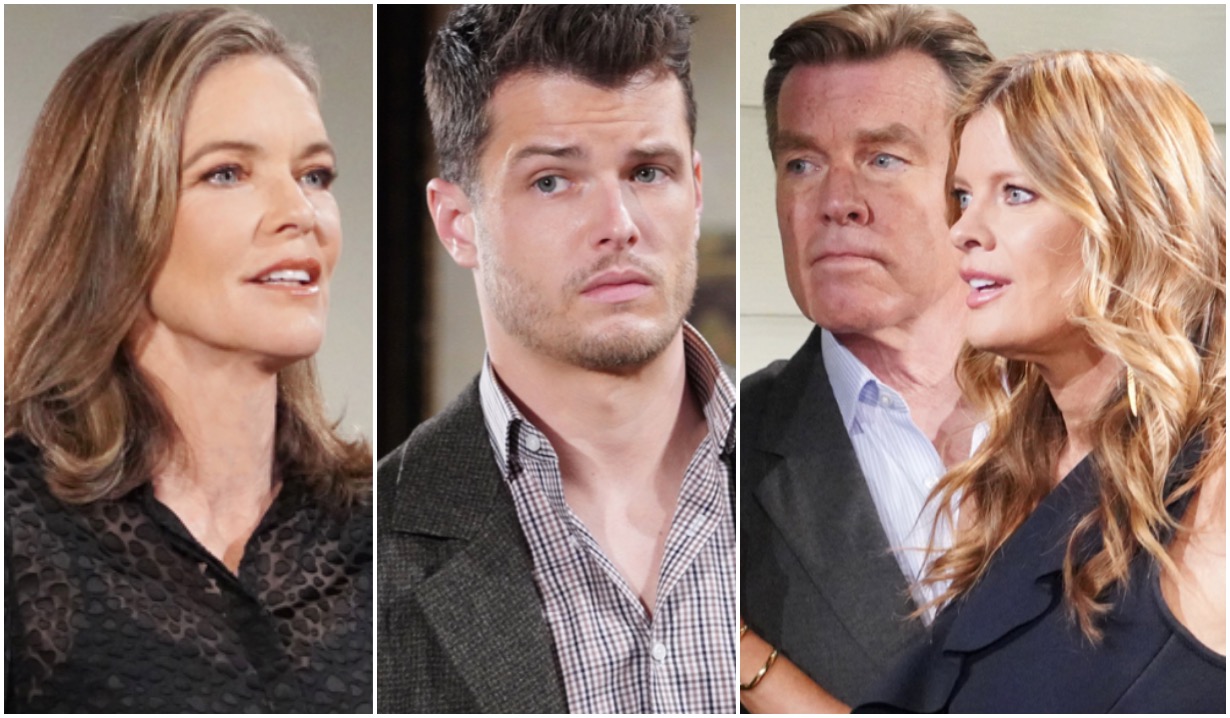 Instead of getting what she deserves, is Diane actually going to get what she wants?

At the moment, The Young and the Restless’ Diane looks like the only person unlikelier than Victor to be invited to an Abbott family breakfast. Jack is disgusted by his ex-lover, and Kyle’s hurt at being reunited with the mother who abandoned him over and over again is palpable. But, as the saying goes, time heals all wounds… maybe even these?

Though things will soon go from bad to worse for Diane — here’s how — headwriter Josh Griffith tells Soap Opera Digest that Kyle “will begin to try to accept her and maybe have her back in his life. It’ll be a difficult road for him and even more difficult because Summer has to deal with the fact that Phyllis just wants to bury this woman.” (Meet the new Summer here.) 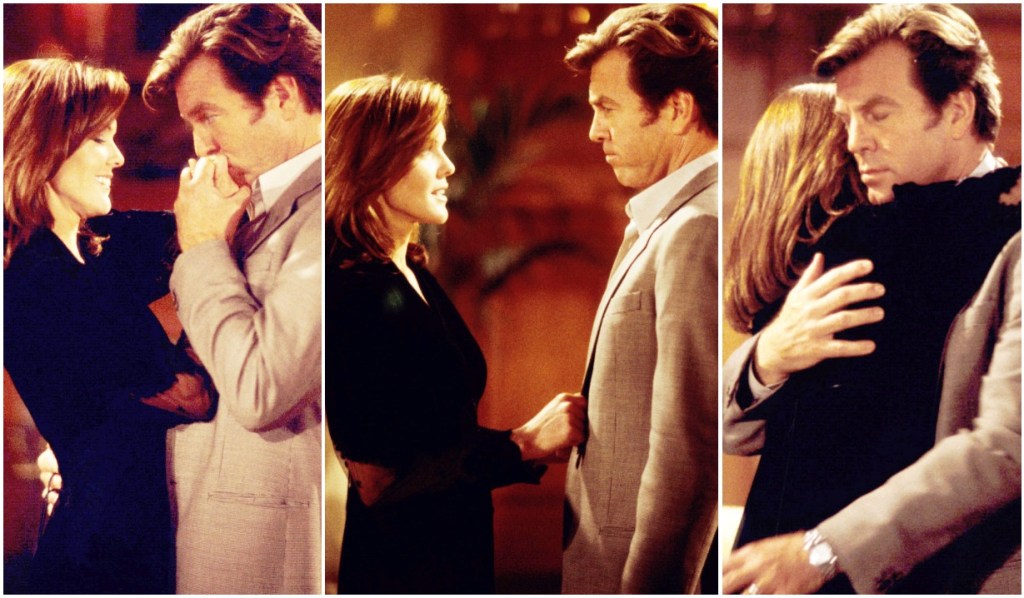 Pictures from the past… or hints about the future?

While the odds of Phyllis ever thawing toward Diane are right up there with Victor shaving his mustache or Sharon having a bad hair day, Kyle’s softening toward Mommie Dearest may have an unthinkable effect on his dad. “As Jack sees Kyle, little by little, forgiving Diane,” says Griffith, “does that open up the possibility that Jack could forgive her, too?”

And if he does, how would that impact his relationship with Phyllis? As the former marrieds spend more and more time together, perhaps unwittingly flirting anew with the idea of reuniting, we can only imagine that any slack Jack cuts Diane would send Red through the roof. Then — as if we haven’t already seen the signs — the women’s cold war would turn red-hot.

<p>Lorie and Leslie, the Brooks sisters, were also rivals. Lorie plotted against her older sister to win the affections of Brad Elliot, and Leslie wound up having a breakdown. Lorie later took up with Lance Prentiss, who, incidentally, was played by <em>Bold & Beautiful’s</em> John McCook (Eric Forrester) — but he got her sister pregnant!</p>

<p>Ashley and Nikki competed over mega mogul Victor Newman more than once over the decades. Ashley also had to deal with animosity from Nikki and Victor’s daughter, Victoria, who made it clear she wasn’t in favor of the interloper in her father’s life.</p>

<p>Traci, who suffered from self-esteem issues found herself competing with firecracker Lauren over not one, but two men. The stress of dealing with Lauren, the original mean girl, as well as her mother’s arrival in town, caused Traci to take up diet pills. Upon learning that Lauren and Danny were engaged, Traci crashed her car. The pair later vied for the attentions of Brad, who married Traci, but also romanced her sister Ashley.</p>

<p>Things got ugly between Paul and Brad over a woman. Paul fell in love with Cassandra, but she drugged Brad and manipulated him into a quickie marriage. Brad extricated himself from the union and Cassandra told Paul he was the man she loved before she died. Paul was named her sole heir, but unfortunately, the divorce decree hadn’t been signed and Brad inherited Cassandra’s wealth, which he happily accepted much to Paul’s chagrin. </p>

<p>This rivalry needs no introduction as it has acheived legendary status. Sheila terrorized Lauren in a multitude of ways, with and without accomplices, over the years, from going after her husband to stealing her child and trying to kill her. Lauren now believes Sheila to be dead, but alas, on sister soap <em>Bold & Beautiful</em>, she’s alive and well!</p>

<p>Although they worked together to stage a takeover of Newman Enterprises, Brad and Jack were foes from way back. The two competed in business circles from the time John replaced his wayward son Jack with Brad in Jabot’s sales department. But they also clashed over Brad’s relationships with Jack’s sisters.</p>

<p>Another legendary soap opera rivalry, Katherine hated Jill the manicurist from the moment she set her sights on her husband, Phillip. The women went on to battle over other men and family members, with memorable catfights including the one in the Chancellor Estate’s attic and the cake fight pictured. The pair, who believed they were mother and daughter for a time, bickered until their long-standing love-hate relationship <em>seemed</em> to end with Katherine’s death, which devastated Jil. But of course, Katherine found a way to continue aggravating Jill from beyond the grave by leaving her a mystery to solve.</p>

<p>Perhaps the best-known rivalry on soaps is that of Victor and Jack who loathed one another completely and often went to extraordinary lengths to prove it. While the twosome have mellowed toward one another, and there’s a grudging respect between them, their past clashes were ones for the ages, and included Jack conspiring to frame Victor for murder, and Victor having Jack taken captive and swapping him out with a doppelganger. They’ve saved each other’s lives, but they’ve also considered leaving each other for dead — seriously!</p>

<p>Another rivalry for the <em>Young and Restless</em> history books is that of Sharon and Phyllis. The two women hated each other from the time that Phyllis moved in on Nick when he and Sharon were grieving the loss of Cassie. Nick went back and forth between the women for eons, which only exacerbated the situation between them. While Sharon and Phyllis tolerate each other now, their history involves catfights, DNA swaps, and a fall down the stairs that landed Phyllis in a coma.</p>

<p>Malcolm and Neil were brothers, but they were like oil and water. When Mal showed up in Genoa City, it quickly became clear that Neil had no use for the sibling he never got along with when they were youngsters. The duo clashed over women and Malcolm even got Neil’s wife Drucilla pregnant, which resulted in the birth of Lily. Deep down they loved one another, and Malcolm was devastated by Neil’s sudden death, but there’s no denying their volatile history.</p>

<p>When Diane showed up in town with Jack’s child while he was married to Phyllis, it was never going to end well. Diane moved into the pool house, which soon went up in flames, nearly killing her. It turned out Diane had set the fire to frame Phyllis for arson and get her out of the way. The pair clashed repeatedly, including physically, and Phyllis ended up being a suspect in Diane’s murder when she was killed.</p>

<p>When Nick fell for Sharon, a girl from the wrong side of the tracks, his mother Nikki decided she wasn’t good enough for her son, and that, as they say, was that. Nikki meddled in Sharon and Nick’s affairs as soap mothers are wont to do, and <a href="https://soaps.sheknows.com/gallery/photos-nikki-sharon-yr-rivalry/" target="_blank">the pair had numerous catfights</a> — by the pool and in the stables. Sharon married Nikki’s husband Victor and burned down their ranch during a particularly dark period. Fond of reminding Nikki of her days on the stripper pole, Sharon and La Newman’s relationship became warmer when Sharon faced breast cancer. Nikki even recently admitted she preferred Sharon to Phyllis.</p>

<p>No one gets under Phyllis’ skin quite like ‘the Bug’! Christine, aka Cricket, became a thorn in Phyllis’ side when she schemed to pull the wool over Danny’s eyes and pass off Daniel as his biological son so he’d stay with her. Rivals for Danny’s attention, Phyllis once ran down Christine with a car! Though their animosity cooled, they still trade insults whenever they cross paths.</p>

<p>Believing that ‘screw up’ Billy Boy Abbott was not good enough for his daughter, Victoria, Victor went to great lengths to come between the two. His meddling in the relationship even resulted in Victoria suffering a miscarriage. Though Victoria and Billy split, The Mustache continues to gun for Billy, who published an article about his nemesis, Victor’s son Adam, and has vowed to take him down along with his company, Chancellor Communications.</p>

<p>Sharon never had a rival for Adam’s affections until Chelsea showed up in Genoa City and bonded with the Newman over being town pariahs. Sharon and Chelsea have gone head-to-head a few times over Adam, and Chelsea once knocked Sharon out cold as she skipped town. The two recently went another round when Adam enlisted Sharon’s help trying to motivate a paralysed Chelsea to start talking again. Chelsea learned Sharon and Adam had shared a kiss and blamed the blonde when she ended up in a mental facility after trying to frame Adam for poisoning Sharon’s husband Rey.</p>

<p>Billy and Cane became rivals when Chloe duped Cane into believing he was the father of her child, when it was actually Billy. Billy was also protective when it came to the Aussie romancing Lily, and the two were never able to get along even when it was thought that they were half-brothers. In fact, they ended up in physical confrontations a few times. They went on to rub each other the wrong way whilst working together on Brash & Sassy and it was Billy who put the final nail in the coffin of Cane’s marriage to Lily by telling her he had kissed Victoria.</p>

<p>Lily couldn’t stand Hilary, who blew into town seeking revenge on her father, Neil, for his role in her mother Rose’s death, and drugged her husband, Cane. Lily’s loathing only intensified as Hilary got involved with Neil, and then Devon. Hilary and Devon having an affair behind Neil’s back after he went blind, didn’t help matters. Lily infamously threw water on Hilary more than once. Despite Devon’s best efforts, Lily and Hilary never got on the same page, and they were arguing when Lily ran a red light. The car was hit by a truck and Hilary and her unborn child died afterward.</p>

<p>Billy’s loathing for Adam stems from the tragic hit-and-run accident that killed Billy’s daughter Delia. Billy had left Delia in the car with her puppy, which she chased across the road in the dark. Adam hit the child but thought he hit the dog. Unable to see it, he carried on, only to realize he hit Delia later. Adam covered it up so his son Connor would receive Delia’s cornea in a transplant. When it all came out, Billy held Adam at gunpoint. Though Billy once said he forgave Adam, it’s not the case, and the two have become enemies as the friction has gone out of control, spilling into all aspects of their lives.</p>

<p>While the writers never really let this become the full-fledged rivalry it might have been, Summer and Lola certainly vied for Kyle’s attentions and there was some nastiness. Both women married him, with Summer even bargaining to get him to the altar by agreeing to donate a portion of her liver to save Lola’s life. Lola struggled to move on with Theo, who had also been with Summer, when Kyle chose his childhood sweetheart.</p>

<p>Honestly, Phyllis could have her own section when it comes to rivalries between her dust-ups with Christine, Diane, Patty, Sharon, Nikki, and more recently, Victoria and Abby. Her newest foe, however, shows a lot of promise. Phyllis took exception to Sally trying to land her ex-husband Jack, but when Sally messed with Summer it was game over. Phyllis exposed Sally, who is trying to resist the urge to retaliate. We say, “Bring on the battle of the redheads!”</p> 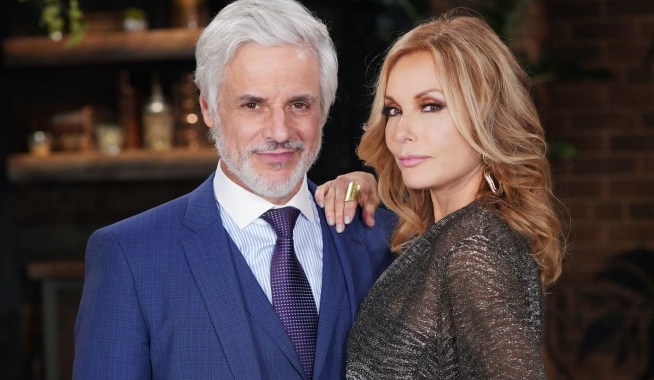 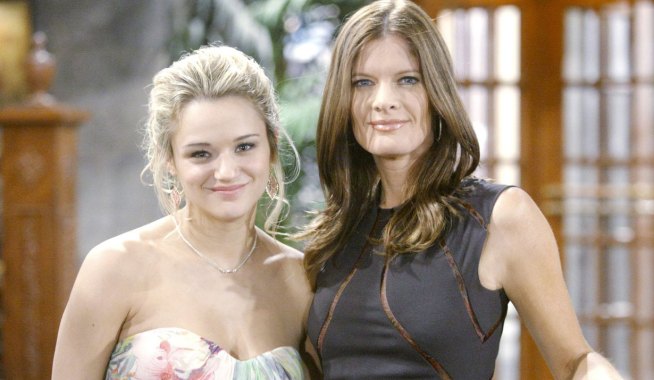