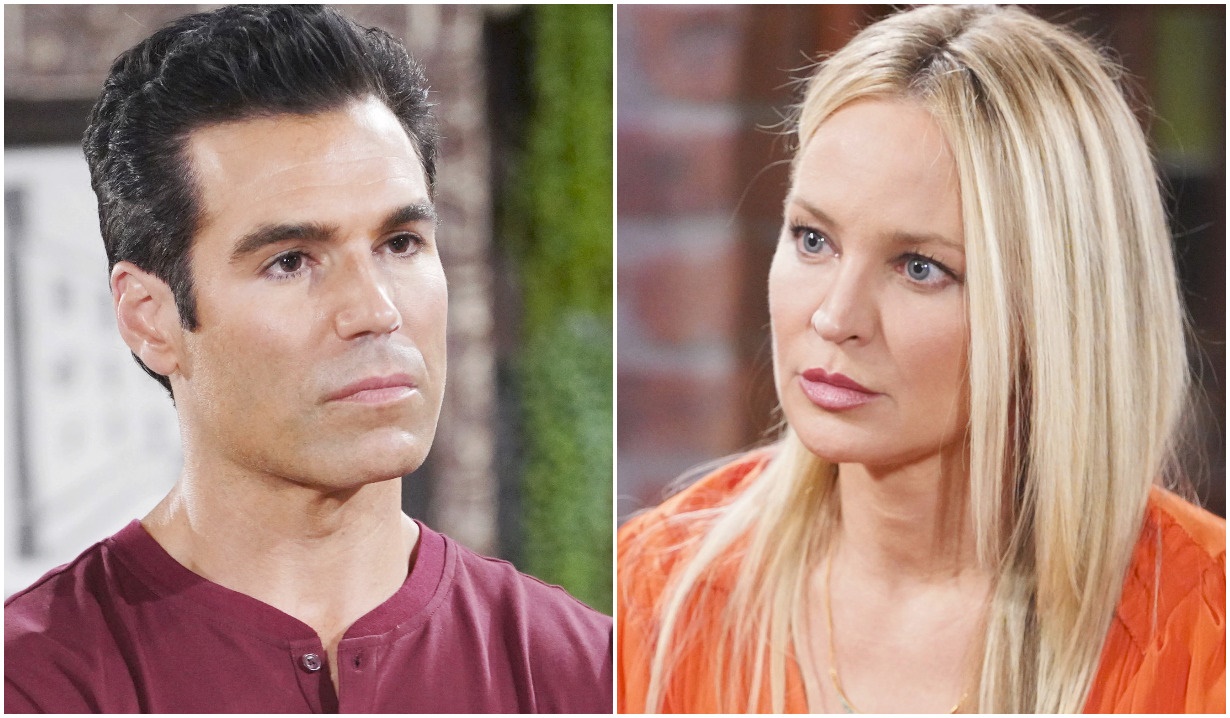 When news broke that the Jordi Vilasuso is leaving Young & Restless it brought heartbreak for fans of his character, Rey Rosales, and for those who love the pairing of Sharon and Rey — or “Shey” as they are affectionately known.

Sharon and Rey have been quite content lately, which is sometimes the kiss of death on a soap opera where happy typically equates to boring. So, what will happen that will send the eldest Rosales off the canvas? There have been a few hints recently…

First of all, Chance is returning to work and will be Rey’s partner. He suffered a bout of PTSD the first time he attempted to return and left Rey without a back-up when he went after a perp on a stakeout. There’s been much talk about whether or not Chance is truly ready to be back on the force, and Rey himself was skeptical.

But with Paul’s offscreen blessing, the plan is forging ahead on the strength of Dr. Huffman’s recommendation, which by the way, we’ve only heard second-hand from Chance. Might the over-eager Chancellor be fudging about his readiness and in doing so, putting his partner in harm’s way once again? Will Rey die on the job, leaving Chance to blame himself and Sharon to grieve?

If so, we can think of only one person Sharon would turn to for support.

On the other hand, it could be betrayal that tears Sharon and Rey’s marriage asunder. With Chelsea dreaming of kissing Rey and chatting him up at every opportunity, there’s a decent chance the detective will betray his wife and that’s how he’ll be written off. Will Rey become the Mia in his relationship and leave Genoa City in shame? It’s possible…

Another possible scenario is that Sharon comes to believe that something is going on between Rey and Chelsea (when there really isn’t) and then betrays him with Nick as a knee-jerk reaction, thus ending the marriage over what was technically a misunderstanding.

Any way you slice it — whichever way Rey is written off — Sharon is bound to end up in one place and one place only — in the arms of her ex-husband, Nick, who has been single, ready to mingle and hanging around Crimson Lights for some time now. How do you think it will all play out?

Look back on Sharon and Nick’s love story in the photo gallery below.

<p>Nick and Sharon overcame many obstacles, especially one huge one named Matt Clark, who raped Sharon and landed Nick in prison, before they finally married. Nikki was against the union — she saw Sharon as a gold-digger. Victor approved. Sharon became pregnant and their first child, Noah, was born premature and was not expected to live. Sharon’s friend Grace located the child she gave up for adoption at age 16 — Cassie — to help ease the pain, but Noah survived and Grace kept Cassie for some time. Eventually, Nick and Sharon and their children formed a little family and Nick adopted Cassie. In later years, it would be revealed that Cassie had a twin, Mariah.</p>

<p>Sharon and Nick split up for a time after she caught him cheating with Grace. They eventually reconciled after Victor sent her packing to New York City.</p>

<p>Sharon and Nick’s life together was sent into upheaval once again when Matt Clark returned… with a new face and name. Because, of course. Soap opera! Anyway, Carter Mills tried to rape Sharon again by drugging her margarita, was foiled, and tried again after luring her to a cabin. Tricia Dennison intervened and drove Carter/Matt off a cliff. They both survived, but Carter later pulled out his breathing tube in the hospital, committing suicide in an attempt to frame Nick for murder again. Nick was exonerated when Larry Wharton testified. Sharon turned up pregnant after the ordeal, but lost the baby after Nick had a tantrum. Blaming him, they split up.</p>

<p>Sharon turned to Diego, which sent Nick running back into Grace’s arms. Jealous of Sharon’s lover, Nick beat him up before starting to romance his ex once again. Sharon and Nick were on the verge of reconcilation when he spotted her — gasp! — kissing Victor! This did nothing for their prospects, worsened the rivalry between her and Nikki (see <a href="https://soaps.sheknows.com/gallery/photos-nikki-sharon-yr-rivalry/" target="_blank">Sharon and Nikki’s epic rivalry in photos here</a>), and sent Sharon out of town until she returned when Cassie nearly drowned. Nick forgave Sharon and they got back together.</p>

<p>Nick and Sharon continued to have their ups and downs, but being kidnapped and nearly killed by Cameron Kirsten gave them a new outlook on their relationship.</p>

<p>Nick went to work for Newman Enterprises and Sharon ended up at Jabot after contemplating a career as a stripper, a prospect quickly snuffed out by the Newmans despite Nikki’s earlier fondness for the, erm, art of pole-dancing. Eventually, Nick hired Sharon to be the face of the Newman Cosmetic Line.</p>

<p>Everything changed for Nick and Sharon after a teenaged Cassie decided to drive a drunk Daniel Romalotti home from a party and got in a car wreck. Cassie suffered an infection after brain surgery, which ultimately took her life, leaving her parents absolutely devastated.</p>

<p>Nick and Sharon struggled to process their grief and Nick was bent on punishing Daniel for Cassie’s death, unaware that he wasn’t the driver (eventually the truth came out in court). Brad lured Sharon back to work on the Beauty of Nature project and Nick ended up diving into a steamy affair with none other than Daniel’s mother Phyllis. After she became pregnant, Sharon and Nick divorced.</p>

<p>As one might imagine, it wasn’t all flowers and rainbows when exes Nick and Sharon went into business with their new spouses Phyllis and Jack. Though the couples weathered a lot of challenges, signs of trouble appeared when Phyllis got jealous over Nick spending time with Sharon whilst dealing with a Noah issue. Not long after…</p>

<p>Or in this case, kissers. After a chance encounter in Paris, Nick and Sharon shared an impulsive kiss on a bridge — that was spied by the stunned Phyllis, who had shown up in France to surprise her husband.</p>

<p>After Brad died saving Noah from drowning, Nick found Sharon at the Abbott cabin to let her know what had happened to their son. Reminiscing led to “Shick” making passionate love on the floor in front of the fireplace. It happened a second time when Nick and Sharon went to the cabin to stop Eden and Noah from having sex. After Nick admitted to Phyllis what had happened she cut up all Sharon’s clothes in her room at the GCAC.</p>

<p>Sharon became pregnant after the cabin hook-ups and there were three possible fathers — Nick, Jack or Billy. A paternity test revealed Nick was the father, but Sharon passed her bump off as Jack’s when she realized Nick was staying with Phyllis. Jack learned the truth and rejected her, which led to her doing a stint in a mental facility. She gave birth while there, and Adam enacted a plot to have her child given to Ashley, who was experiencing a hysterical pregnancy after he caused her to lose hers. Nick and Sharon were devastated to be told their baby had died.</p>

<p>Nick and Sharon were overjoyed when the truth came out and they were reunited with their baby, Faith. Their road to reconciliation, however, was an extremely bumpy one as she had fallen in love with Adam and married him in the interim. Though still drawn to his half-brother, Sharon made a decision to stay with Nick, but when he learned she’d been with Adam again, he filed for full custody of their daughter.</p>

<p>Faith’s growing up was mostly tumultuous times for her parents, who were with other people more oftent than together. Sharon went on trial for murdering Skye and went on the run from her trial, after which she was presumed dead for a time. Nick fell in love with Avery, and Sharon married Victor.</p>

<p>When things went south with Avery, who was still to involved with Dylan McAvoy, Sharon was there to comfort Nick. They began spending more and more time together, but she was having hallucinations of Cassie. This later turned out to be her twin, Mariah, who Sharon later discovered had been stolen from her at birth and raised by Ian Ward in his cult.</p>

<p>Nick recreated their college Polynesian tiki dance at Crimson Lights and proposed. Sharon accepted, but ran off from their wedding when Phyllis, out of the coma she landed in after falling down the stairs during a confrontation with the blonde, turned up. Soon after, Sharon was forced to admit she had tampered with Summer’s DNA results, making it look like Jack was her father and not Nick, and the pair split again.</p>

<p>When Sharon was married to Dylan, and Nick was involved with Sage, both women got pregnant. As is wont to happen on soaps, there was a baby switch. Sharon lost her pregnancy, but was medicated in Fairview and continued with a hysterical pregnancy. Patty Williams, also in the facility, saw to it that a nurse took Sage’s baby and gave it to Sharon. It wasn’t until after Sage was killed in a car accident that Nick learned the truth. Believing Christian was his, he took the child from Sharon and Dylan and went to live with his new love, Chelsea. Christian, as it turns out, is actually Adam’s biological son.</p>

<p>Sharon and Nick became engaged to be married again after Chelsea ditched him. They fended off Victor’s attempt to get custody of Christian, but Sharon called off the nuptials and told Nick she no longer recognized him when he — quiet literally — went to the “dark” side by startin up a company called Dark Horse.</p>

<p>Sharon and Nick worked things out and finally headed to the altar… only for the wedding to be derailed by the shocking revelation that Nick had bedded Phyllis when they were going through their rough patch. The on-again, off-again relationship was most definitely kaput.</p>

<p>Nick and Sharon, after all their trials and tribulations, grew close again and stayed close throughout her marriage to Rey, which ended abruptly when he took a heart attack while driving on a foggy night and was involved in a collision. Nick was the one to break the heart-shattering news to Sharon and he stayed by her side in the aftermath.</p> 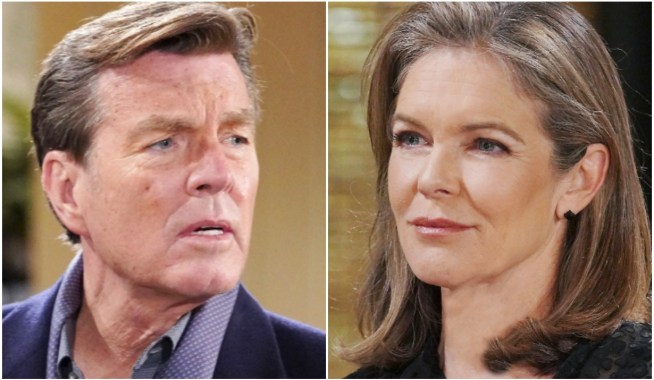 Now That Young & Restless' Diane Has Returned, Jack — and Viewers! — May Want to Brace for an Even Bigger Betrayal

As Young & Restless Prepares to Say Goodbye to Rey, Look Back at the Last Man Standing in a Family With So Much Promise 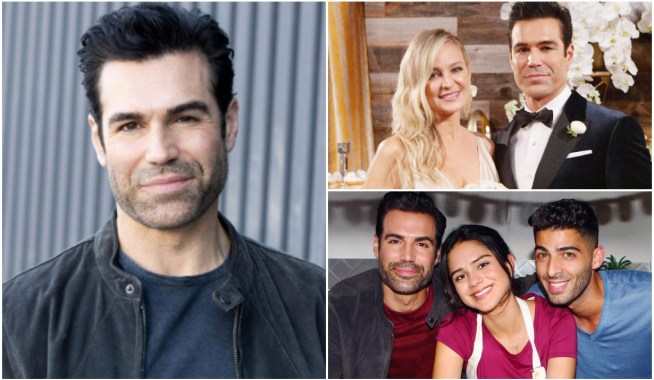