Vincent Irizarry Opens Up About the Easter Epiphany That Saved His Life: ‘I Know That I Was Created for Something Better Than This’ 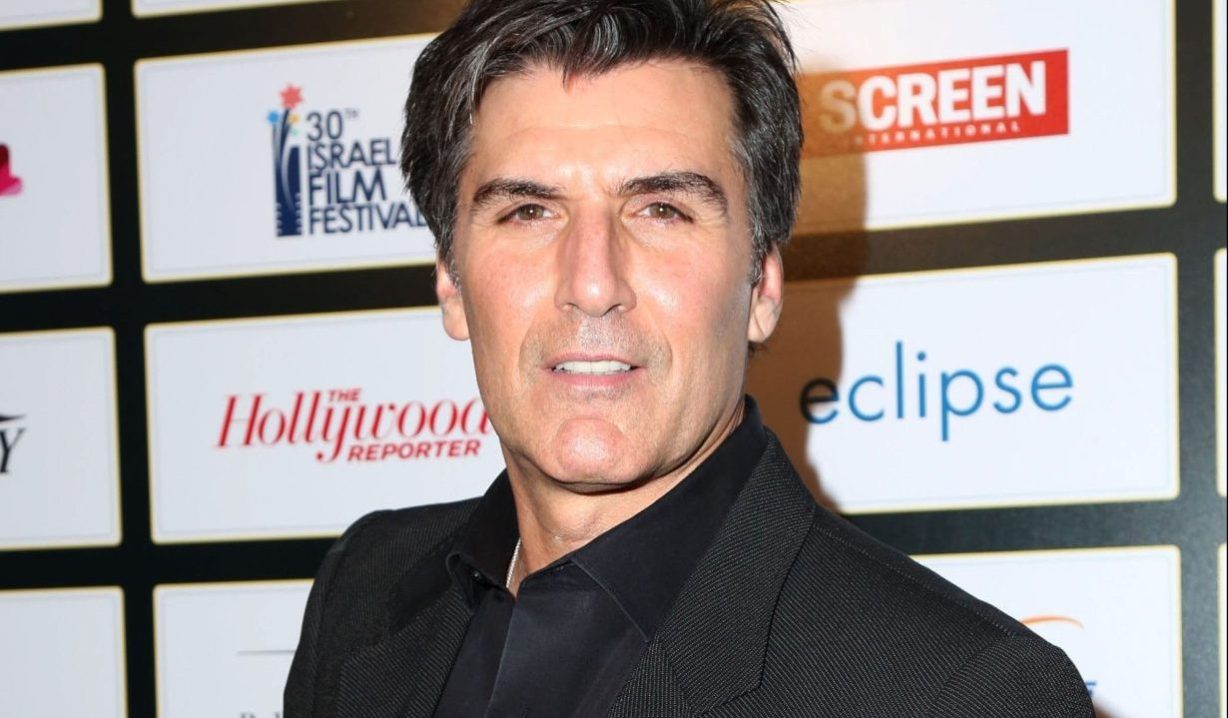 “I did pretty much everything.”

Soap vet Vincent Irizarry gave us all a scare recently when his act of heroism almost cost him his life. Fortunately, it seems like he’s on the road to recovery. But it’s not the first time we almost lost the actor. Like many of us, he led a wild life when he was younger, but Irizarry went down a dark path that could’ve very easily taken him from us before we ever even met.

Shortly before his hospitalization, the actor sat down with General Hospital‘s Maurice Benard (Sonny) for his State of Mind podcast. The two talked about a slew of things, including Irizarry’s wild youth — a youth filled with drugs and destructive behavior.

He came of age, he explained, during the drug culture of the ‘60s and ‘70s. And he was very much a man of the times. When Benard asked what all he tried, Irizarry didn’t hold back.

“I would say pretty much everything,” he admitted, telling a shocked Benard that he’d even tried heroin when he “was living in an apartment with a few other people who were doing it regularly,” but it wasn’t for him.

“I’ve always had a wanderlust,” he continued, “a lust for life, a desire to acquire life experiences, to have a life fully lived. Which is a good thing, but it can also lead to destructful decisions.”

Part of that lust for life led Irizarry to a love of performing that actually began with music, rather than acting. Irizarry started his musical career at a young age, studying the piano when he was just 11. And that may have planted the seeds that would end up saving him.

“It gave me a discipline,” he noted, “a focus at that time, at those years, and it was a good thing for me because in some ways it was a saving grace for me. Because it was kind of a destructive period in my life at the time. I can honestly say that.”

After high school, Irizarry moved to Boston to study music at Berklee College of Music. As time went on, though, he says he became more and more introverted as her got lost in his own world and his own piano playing. That’s when his English teacher stepped in and asked if he’d ever thought about acting. Irizarry had, but he’d never tried it.

Once he did, he found his calling in life. At first he took some roles up in Boston, finding it fairly easy to make his way. Then he decided to quit college and move to New York City to become a professional actor. That, he admits, was a whole different experience.

Whereas once he was trying out for parts against a handful of others, in New York, he was auditioning against hundreds and hundreds of actors all trying out for the same roles. It didn’t go well, and the company he was keeping in his new life wasn’t helping. Irizarry’s drug use and drinking were out of control.

“I was living in that apartment with a bunch of people,” he said of his time in Manhattan’s East Village. “One of them actually OD’d. I had to call the ambulance and they took him out.”

That, though, wasn’t rock bottom. That didn’t hit until Easter Sunday when he was 21. 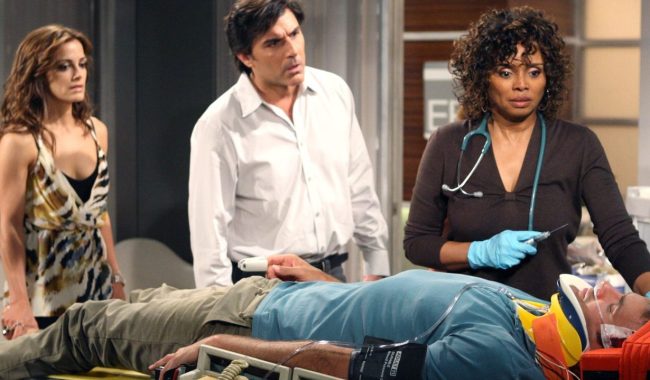 Above: Years later, Irizarry would play All My Children’s nefarious Dr. David Hayward, a man who had no problem drugging others to accomplish his needs.

The actor was supposed to meet with a director for a part in Shakespeare’s Taming of the Shrew. But he was a nervous wreck and spent the night before on a bender, drinking, shooting up speed and then crashing with his roommates in their apartment, “with everybody strewn out all over the floor.”

He woke up too late and missed his appointment, then tried calling the director and claimed that his car had broken down.

This was when he realized enough was enough, looking at himself in the mirror and telling himself, “This can’t be what I was created for. This cannot be. I can’t go this route. This is not gonna be beneficial, healthy for me. I know that I was created for something better than this.”

“It was an epiphany,” he said. “I literally had this eye-opening moment right then, and I literally stopped everything. I stopped drugs, I didn’t do anything. I went, that day and got a job there at the Riviera Café.”

The soap vet got a part and moved into the theater itself for six months for free, helping out to earn his way. He left behind his roommates, his friends and focused on acting. Three years later, he got his big break in daytime as Guiding Light’s Lujack. 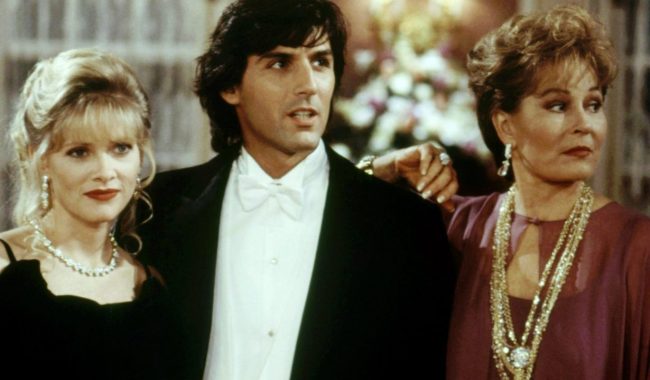 Above: Irizarry turned his life around and began a daytime career on Guiding Light with legends like Barbara Crampton and Marj Dusay.

More: The All My Children wedding that made history

Music and acting were his “saving grace” Irizarry insisted, saying that they were “a salvation because of the focus and the discipline it gave me during those destructive, exploratory periods of my life.”

“I always felt that the world doesn’t stop turning waiting for you to get on,” he concluded thoughtfully. “This is your moment.”

He was right. It was his moment, and the future soap actor made the most out of it, turning it into a career spanning four decades. And the man he became is incredible, risking his life to defend someone he doesn’t even know.

Before heading out, why not check out a gallery of Irizarry’s fellow All My Children stars then and now. He’s not the only one who grew into quite the incredible human being. 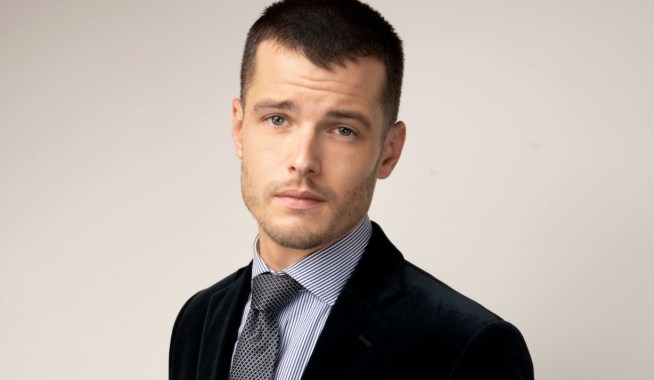 Young & Restless Shocker: If We Just Figured Out Who's Been Texting Jack, Things Are About to Get Much, Much Worse 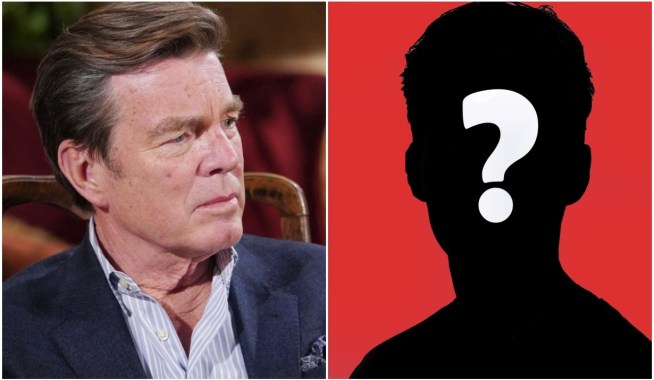