A Love for the Ages: Celebrate the 37th Anniversary of Young & Restless’ Nikki and Victor’s First Magical Wedding — Plus, All of the Mustache’s Marriages, Ranked 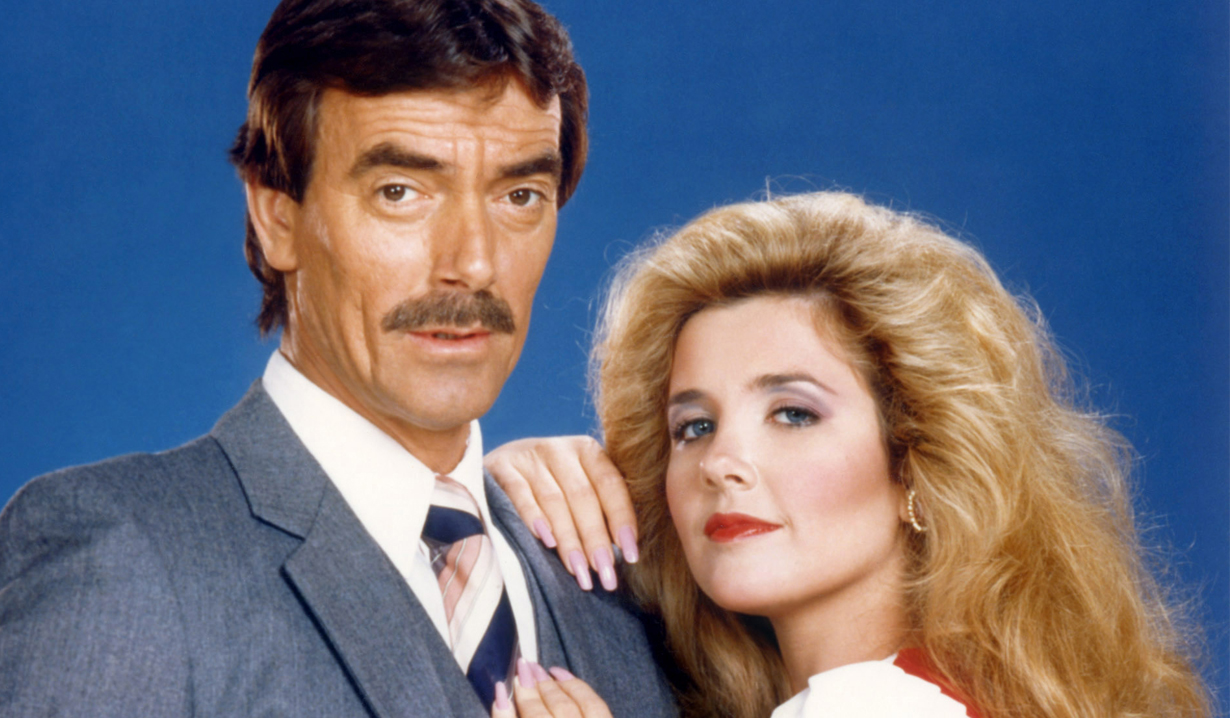 We always had a good feeling about these two crazy kids.

Let’s face it: Some loves burn out all too quickly, while others glow eternally. The Young and the Restless‘ Nikki and Victor have had some (OK, many!) ups and downs. But when they first married on April 13, 1984, we could tell that their love would be one that would smolder forever.

The couple’s fairytale wedding was a culmination of one of daytime’s greatest love stories, not to mention the soap’s highest-rated episode ever! It was a wedding, though, that almost didn’t happen.

More: This battle could tear the Newman family apart

Victor was, perhaps a bit understandably, feeling sorry for himself after being shot in the groin with a harpoon while rescuing his bride-to-be from her dastardly kidnapper, Rick Daros. If he couldn’t please Nikki in the bedroom, he couldn’t bring himself to marry her. Nikki had tried talking to him, but all the love and support she could offer wasn’t enough to sway a man whose pride was as injured as his delicates.

But then a miracle happened as Victor prepared to skip town forever. He was flipping through pictures of Nikki’s stripping days and felt something strange. Wait. Could it be true? Was he no longer impotent? He wasn’t! With that realization, The Mustache ran back to Nikki and informed her that their wedding was back on.

If that’s not romance, we don’t know what is. 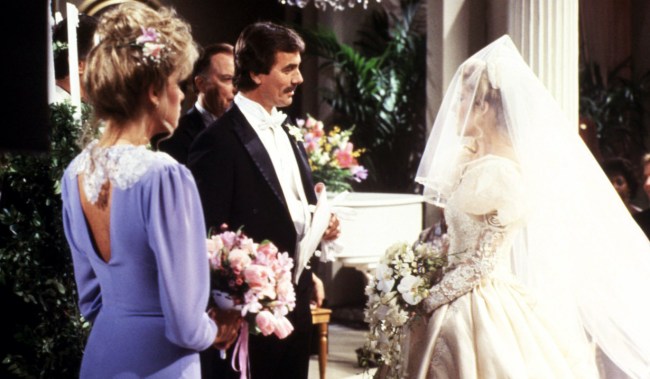 All kidding aside, the wedding day itself really was a romantic fairy tale. Nikki’s sister Casey served as the maid of honor, while stalwart Colonel Douglas Austin stood for his good friend Victor. The two had their hands full calming the bride and groom’s jittery nerves, but all those butterflies just confirmed their deep commitment to one another.

Victor was nothing short of dashing in his tux, while Nikki’s wedding dress was a thing of sublime beauty. French silk, royal crown, a 10-foot train and hand-beaded with pearls — it would have made royalty blush.

As the two exchanged vows promising eternal loyalty and respect, they gazed into each other’s eyes with a love that only comes along once in a lifetime. And they then swore to share that love with not just each other but with everyone around them. There wasn’t a dry eye in the house.

Actually, there wasn’t a dry eye in any house! 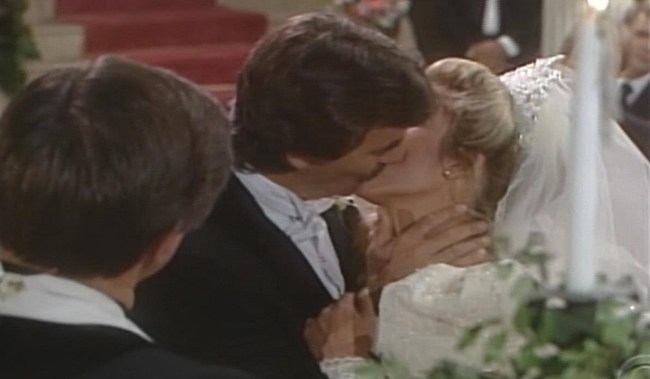 Surrounded by the gentle glow of candles, their first dance was just as perfect. As “Through the Eyes of Love” played for those few brief moments, there was no one else in the world but Nikki and Victor. By the time the other guests began trickling out onto the dance floor, all we wanted to do was climb through our screens and join them.

A Comedy of Terrors

Of course, this being the soap world, the day wasn’t all rainbows and kittens. In fact, it was almost derailed when Victor’s deranged former secretary, Eve Howard, secretly crashed the wedding!

She’d broken out of the sanitarium in which she’d spent the last year the second she’d spotted the happy couple’s announcement in the paper. No one was taking her man! The wedding guests were on high alert after getting word of her escape, but maybe they should have been on higher alert. Eve had no problem knocking out a caterer, stealing an outfit, putting on a fake French accent and slipping into the wedding with murder in her eyes!

But it was just not Eve’s day. Her first attempt at killing Nikki with poisoned brandy went awry when the wedding march began, and the bride was rushed out before getting to it. Eve tried again after the ceremony, this time going a bit fancier with some poisoned champagne. But Casey snatched that out of Nikki’s hand before she could drink and gave it to another guest!

Fed up, Eve decided to just stab Nikki and be done with it. She grabbed a knife, snuck into the bride’s room… and was knocked over by the door when Casey came barging in! Thwarted and frustrated, Eve rushed out, leaving the sisters baffled over the strange waitress.

Alone, she vowed that she would end Nikki, but for that one beautiful day, at least, it was if the universe itself was protecting the glowing bride.

We always celebrate weddings as joyous beginnings, but this particular wedding also gave fans a chance to get some final closure. A number of characters who’d left the show came back for this one special day, and chief among them were the Brooks sisters. That was the last time we saw Chris and Leslie until 2018. Lorie made an additional visit in 2002, but poor Peggy was never seen again.

It was, in a way, a passing of the torch. The show had already mostly shifted from the Brooks and Foster families of the sudser’s earliest years to the Newmans and Abbotts. The ladies who had begun the show had all left town a few years earlier. This, though, gave fans one last chance to say goodbye to the Brooks sisters as they returned to give their blessings to Nikki and Victor.

And blessings they would need! That first union did last a decently impressive four years, but it was just the start of Victor and Nikki’s marry-go-round. Still, here we are almost four decades later, still celebrating their love. The Newmans are on their fourth marriage, but it seems like they’ve finally figured out what we’ve known since that beautiful April day in 1984: They were always meant to be.

If you’re up for taking a trip down memory lane and reflecting on just how bumpy the road to their current wedded bliss really was, why not check out some photos as we rank all of Victor’s marriages! (One guess as to which marriage is number one!)

Paulina Porizkova Reveals Ric Ocasek Controlled What She Wore & What She Did: Why She Stayed