Should Mariah Carry Abby’s Baby? The Young & Restless Plot Point So Divisive, It Has Our Editors Taking Sides 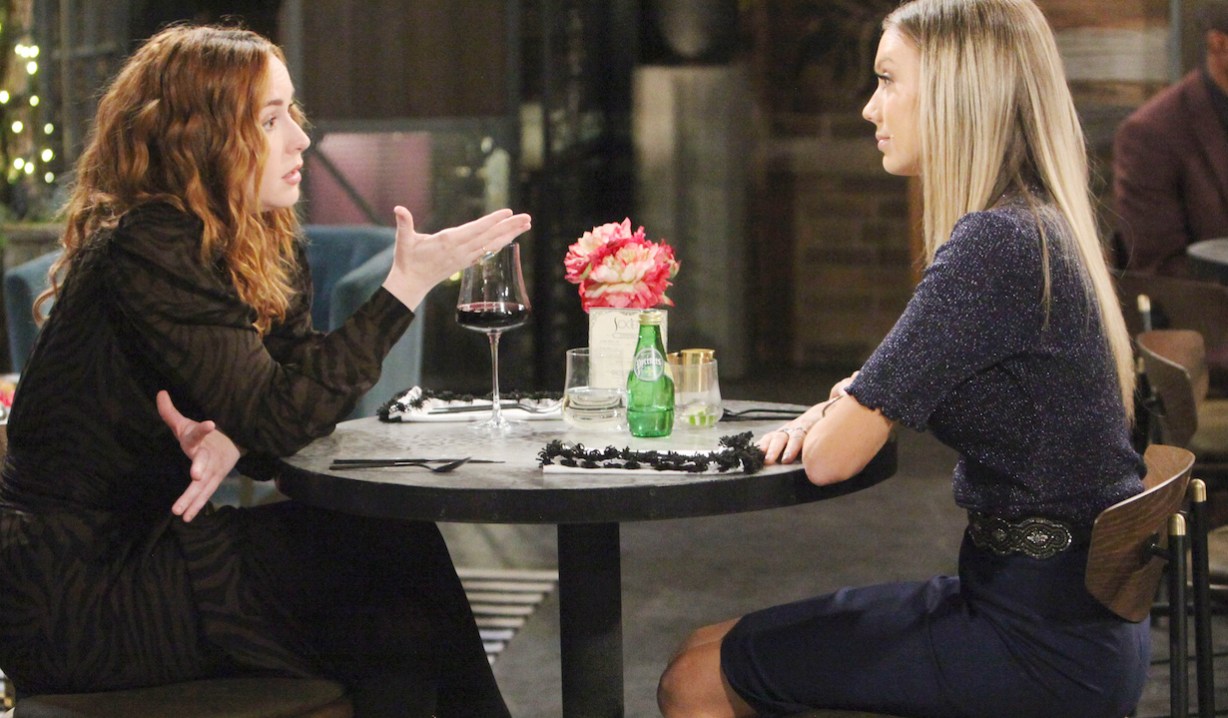 Every story has two sides… and we’re looking at this one from both angles.

Rarely does the entire audience agree on a soap storyline. While you’ll always be able to find people on social media insisting that “everybody” feels the same way about a plot, that’s almost never the case. Take, for example, one of the biggest plots unfolding right now on The Young and the Restless: Abby’s baby drama.

When Chance and his wife asked Mariah to consider being their “gestational surrogate,” you could almost hear a loud “crack” as the audience divided right down the middle. As it turned out, the same thing that was happening on Twitter and Facebook took place right here at Soaps.com. While we momentarily considered having editors Richard Simms and Candace Young duke it out Thunderdome style, we instead thought, “Hey, why not let them go at each other in a public forum for the entertainment of the masses?”

Richard: I fully admit that when they aired that Abby-centric episode last week, I was not into the idea at all. I don’t get why Abby can’t take five minutes to enjoy her new life as a happily married woman before becoming baby-obsessed, but that’s the route they opted to go. And I walked away from that episode sort of surprised by how much I enjoyed all the different perspectives presented.

Candace:  I felt an Abby-centric episode was wholly unnecessary, given that there aren’t a ton of viewers out there on the edge of their seats over her infertility issues. But while I found portions of it to be less than thrilling, I’ll admit there were some standout scenes that made it worth watching. Melissa Ordway did an excellent job of depicting the array of emotions Abby was feeling — heartbroken, lost, exhausted, even a little crazed — and Michelle Stafford’s facial expressions and one-liners as Phyllis provided a few comedic moments were a perfect counterpoint to the sad subject matter.

Richard: I was annoyed when Abby and Chance invited Mariah over for the big “Have our baby” talk but didn’t include Tessa. That felt really disrespectful of Mariah’s relationship. But I loved Camryn Grimes’ reactions as Mariah sot of tried to take in this huge request they were making of her. And I totally cracked up when Abby called Chance back into the room, clearly concerned that she’d basically broken a shellshocked Mariah. 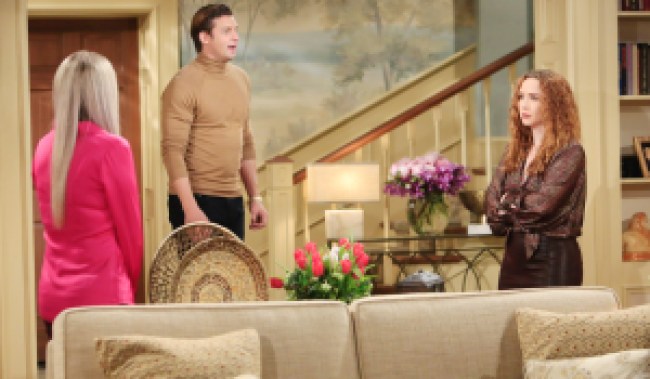 Apparently, things were so awkward nobody could even make eye contact.

Candace: I sometimes feel that Abby is the most self-centered character on the canvas, and her approach to this situation did nothing to change that viewpoint. Rather than start the conversation by asking if Mariah and Tessa had ever considered having children, or including Tessa at all, for that matter, Abby and Chance dropped this bombshell on Mariah as though she were single. Totally disrespectful. Abby then delivered a speech on why they want what they want, with the insinuation that Mariah should be delighted and honored to have been selected. I also can’t help but feel that Abby is, in part, choosing Mariah with the expectation of being able to micromanage the pregnancy, which would have me running for the hills if I was in Ms. Copeland’s shoes. I agree, however, that Abby’s palpable nervousness and Mariah’s hilarious reactions were absolutely spot on.

Richard: After leaving the mansion, Mariah met up with Tessa and shared the big news. I thought these scenes were really well-scripted, with Mariah asking, “Can you picture me pregnant?” and Tessa going from confused (“Are you filming me? Is this a social-media prank?”) to basically supportive. She sort of sat back and let Mariah do what Mariah does, which is spiral a little as she worked through the unexpected development. For me, it felt as if Tessa was being supportive, knowing that at the end of the day, it was Mariah’s body and her decision.

More: Is Chelsea’s bad side about to re-emerge?

Candace: For me, these scenes didn’t play as though Mariah and Tessa were a serious committed couple. Rather, it felt like Mariah was bouncing the idea off of a buddy. I couldn’t believe the script had Tessa say, “I guess the only question you have to ask yourself is, ‘Is this something I truly want to do?'” as though she was completely uninvolved. Yes, it’s Mariah’s body and it’s her decision, but as a couple, it affects them both. I’d have liked to see Tessa bristle at not being included in the conversation from the beginning, particularly in light of her having just spent the night before helping to boost Abby’s spirits and discussing her dilemma, and perhaps even question whether Mariah would want to have a baby with her before having one for someone else.

Richard: I have to admit, I’m torn on how I want this to play out. On the one hand, as a huge fan of Camryn Grimes, I want her to have a story. But I want that story to be one written for her and Cait Fairbanks’ Tessa, as a couple, not one where they sort of feel like they’ll wind up being little more than an appendage to Abby’s baby frenzy. There’s potential here, but I’m not sure I trust the show in its current state to deliver on that promise.

Candace: I’d also like to see Camryn and Cait get a fantastic storyline out of it, but I share your concerns. There only seems to be one way this can go to deliver any real drama, and that’s Mariah becoming attached to the baby and not wanting to give it up. Also bothersome is it’s not clear why Mariah would want to do this for Abby. Their friendship has never made sense to me, given Abby’s history with Sharon. It might have been soapier to have a single woman, such as Lola, be the surrogate, as that could lead to entanglements galore, though technically, neither Mariah nor Lola would be candidates as surrogates can’t be first-time mothers (in real life surrogates must have already successfully given birth before)… but this is a soap opera… and that’s a different story!

And now comes the fun part, gentle readers: Are you #TeamCandace, #TeamRichard or do you perhaps have a different take on the story? Share your thoughts in the comment section, then visit the gallery below in which we flash back on Mariah and Tessa’s love story. 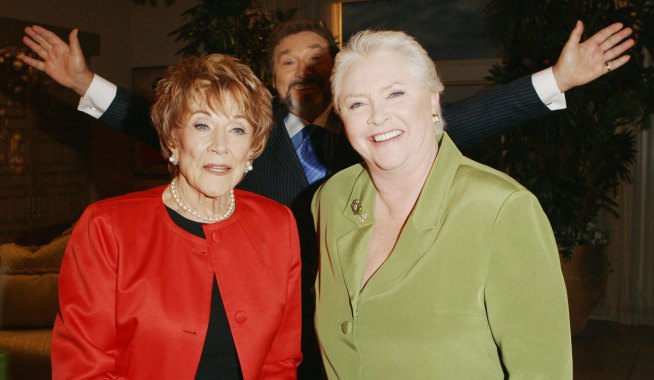 Young & Restless Weekly Preview: Nikki Questions Victoria Where She Stands With Billy — And Which Man Does Elena Want? 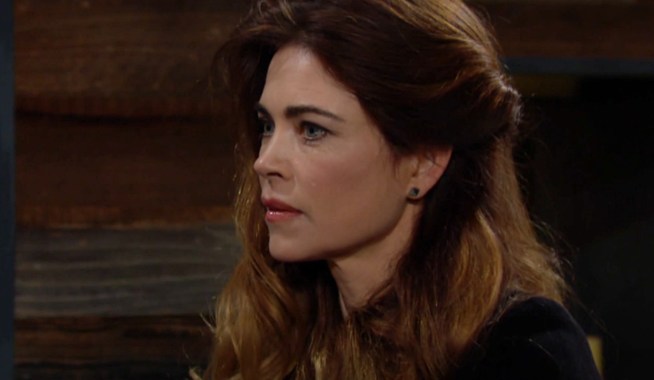