Young & Restless’ Camryn Grimes and Cait Fairbanks Shut Down Bullying: ‘It’s OK to Be Who You Are’ 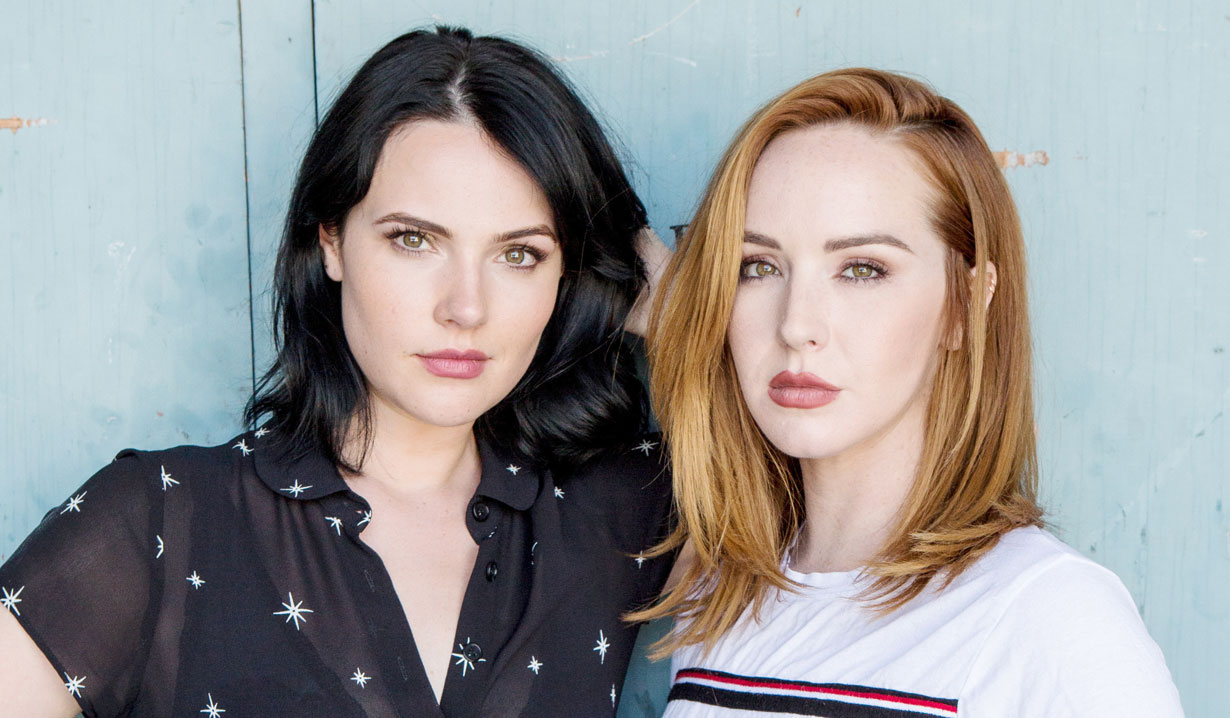 The Young and the Restless stars Camryn Grimes (Mariah) and Cait Fairbanks (Tessa) released a video in honor of Spirit Day shooting down bullying. In the video, Fairbanks told all young people it is okay to be who they are regardless of their race, ethnicity, religion, sexual orientation or gender identity. Grimes urged people to wear purple on October 15 and visit GLAAD’s website for more information on the day. Grimes and Fairbanks are the CBS soap opera’s only characters who are LGBTQ+, and Grimes recently opened up about being bisexual.

Happy Spirit Day!! 💜🦄 Today we celebrate and uplift our LGBTQ+ youth by showing our support. Wear purple, use #spiritday, be an ally and speak out against bullying and discrimination of any kind. You are not alone. You are loved. 💜💜💜💜

The Bold and Beautiful’s and soon to be The Young and the Restless cast member Courtney Hope (Sally) also shared a photo of herself in purple, and wrote, “Navigating life as a child/teen/young adult comes with enough struggle, let alone being subjugated to turmoil based on others unprecedented fear, ignorance and hate. I choose to stand for love, acceptance, support and peace… I stand with you. You’re not alone.”

#SpiritDay 💜 Today I wear purple in support of the LGBTQ youth in standing up against bullying. Navigating life as a child/teen/young adult comes with enough struggle, let alone being subjugated to turmoil based on others unprecedented fear, ignorance and hate. I choose to stand for love, acceptance, support and peace ☮️🏳️‍🌈🙏🏼… I stand with you. You’re not alone. —————————————————— In honor of GLAAD’s 11th annual #spiritday, head over to the link in my Bio to learn more. 💜

Young Alyvia Alyn Lind (Faith) also posted a photo of herself in purple and showing off her cute puppy. “Join me in wearing purple today to celebrate the LGBTQ+ community and to fight against bullying.”

💜#happyspiritday !! join me in wearing purple today to celebrate the LGBTQ+ community and to fight against bullying.💜 love u all so much and let’s spread happiness!!!💟💟💟

The Young and the Restless released a video from Sasha Calle (Lola) saying it was okay for any young person to be exactly who they are and encouraged others to spread the word with the social media hashtag Spirit Day.

We stand against bullying. 💜 Show your support and go purple today for #SpiritDay! #YR

The Bold and Beautiful’s Rena Sofer (Quinn) posted a photo from the 1991 New York City pride parade with a friend in which she and others marched for LGBTQ+ rights in the midst of the AIDS crises. She also noted, “Today we celebrate Spirit Day 2020 and I continue to march along in spirit with all my LGBTQ friends and family!!! We’ve come a long way and still have a looooonnngggg way to go!!!”

Flashing back to 1991 at NYC #gaypride parade!!! Me and my friend Melton marched along with all our #lgbtq friends for equality and rights. This was in the midst of the #aids crisis as well and marching was so important!! Today we celebrate #spiritday2020 and I continue to march along in spirit with all my LGBTQ friends and family!!! We’ve come a long way and still have a looooonnngggg way to go!!! @boldandbeautifulcbs @glaad

Greg Rikaart, who plays Kevin on The Young and the Restless and Leo on Days of Our Lives, also voiced his support that nobody should be bullied or called names simply for who they are.

No one should be bullied simply for being who they are. 💜 @gregrikaart and #YR are going purple in honor of #SpiritDay! To learn more visit glaad.org/spiritday. 💜💜💜

Kate Linder, Esther, shared a photo of herself in a purple swear and wrote, “Take a stand against bullying and send a strong message of support to youth across the country.”

Take a stand against bullying and send a strong message of support to youth across the country. #lgbtqyouth #spirtday @youngandrestlesscbs #yr

The cast and crew of #GeneralHospital supports LGBTQ youth and stands against bullying. Join us in wearing purple today (October 15th) for #SpiritDay. Click the link in our bio to find out more. @glaad #ChooseKindness #GH

General Hospital’s Wes Ramsey (Peter) shared the same message and noted he’d be wearing purple. “Tomorrow I’ll be wearing purple to honor my uniqueness… and yours. It’s okay to be who you are, no matter your background, race, religion, ability, sexual orientation, or gender identity. Stay proud of yourself within…and the bullies will never win.”

Tomorrow I'll be wearing purple to honor my uniqueness…& yours. 🙂 It’s okay to be who you are, no matter your background, race, religion, ability, sexual orientation, or gender identity. Stay proud of yourself within…and the bullies will never win. #SpiritDay #ChooseKindness #october15th Find out more at glaad.org/spiritday

What is Spirit Day? Every year on October 15, people wear purple for Spirit Day to support LGBTQ+ youth in a united stand against bullying. It’s a way to show solidarity with the youth and to take part in the largest, most visible LGBTQ anti-bullying campaign in the world. LGTBQ+ youth face disproportional rates of bullying for who they are. 70 percent of LGBTQ+ students have been verbally harassed or heard homophobic remarks from school staff and teachers. 29 percent have experienced homelessness, been kicked out of their house, or run away. One in three had been physically threatened or harmed, and more than half of transgender or non-binary youth have considered suicide.

Get your free daily soap-opera fix for all of the other daytime dramas delivered straight to your email inbox by signing up for Soaps.com’s newsletter. And don’t miss our gallery of out and proud soap opera stars.

<p>Greg Rikaart has played the lovable and often scheming Kevin Fisher on <em>Young & Restless</em> since 2003. He has also played the out and devious Leo Stark on <em>Days of our Lives</em>. Rikaart married producer, writer and actor Robert Sudduth <a href="https://soaps.sheknows.com/the-young-and-the-restless/news/43519/yrs-greg-rikaart-is-married/" target="_blank">on the beach in May</a> 2015. The couple had been together ten years at the time. Sudduth once played a stalker for two episodes on <em>Young & Restless</em> in 2006.</p>

<p>Matt Bomer got his start playing Ben Reade on Guiding Light and moved onto primetime with the shows Tru Calling and White Collar. After appearing in the films Magic Mike and Magic Mike XXL, he joined American Horror story and most recently played the love interest to Will’s character on Will & Grace. Boomer married his husband publicist Simon Halls in 2011, and publicly came out in 2012 <a href="https://www.youtube.com/watch?v=SpXHJFVnW8Q&feature=emb_logo" target="_blank">during an acceptance speech</a> for his Steve Chase Humanitarian Award. </p>

<p>Tuck Watkins is known for playing David Vickers on One Life to Live and one half of Wisteria Lane’s gay couple, Bob Hunter on Desperate Housewives. Watkins came out in 2013 to Marie Osmond on her short-lived daytime talk show, Marie. In 2013 he became a father to twin sons, Catchen and Curtis, via surrogacy.</p>

<p>Jonathan Bennett got his start playing Adam ‘J. R.’ Chandler Jr. on All My Children. He went on to play Aaron Samuels in the modern cult classic film Mean Girls, along with guest-starring on a number of television shows. Bennett officially came out as gay in 2017 and is in a relationship with Jaymes Vaughan, an actor who once appeared on the reality show Amazing Race.</p> <p> </p> <p> Jaymes Vaughan</p>

<p>Brother of movie star Chris Evans, Scott Evans is known for playing the character Oliver Fish on One Life to Live. His character struggled with his homosexuality, but eventually came out and was one half of the popular couple Kish with Kyle Lewis (Brett Claywell). He also recurs as the character Oliver on the Netflix series Grace and Frankie. Evans came out at the age of 19.</p>

<p>Latin heartthrob Ricky Martin first hit the public eye with the boy band Menudo. In 1994 he was cast as singer and bartender Miguel Morez on General Hospital. He later exploded on the pop-charts with the smash hit, Livin’ la Vida Loca. He has gone on to record albums in both Spanish and English, as well as appearing on Dancing with the Stars and the Mexican version of The Voice. Martin publicly came out in 2010. He is <a href="https://soaps.sheknows.com/general-hospital/news/50532/gh-alum-ricky-martin-marries-partner-jwan-yosef/" target="_blank">married to painter and artist Jwan Yosef</a> and has four children through surrogacy. </p>

<p>Maureen Garrett played Holly Norris on Guiding Light. Her character along with Roger Thorpe, played by Michael Zaslow, was one of the shows most popular, yet complex, couples. Garrett <a href="https://www.out.com/entertainment/television/2012/10/11/maureen-garrett-lesbian-guiding-light" target="_blank">came out in 2012</a>. She has been in a long term relationship with Janet Morgan for over twenty years and has three children. </p>

<p>Joanna Johnson is best known for playing Caroline Spencer Forrester on Bold & Beautiful from 1987 until 2014 when the character died from leukemia. She’s been married to actress <a href="https://www.tvguide.com/news/bold-beautiful-joanna-johnson-1047477/" target="_blank">Michelle Agnew since 2008</a> and they have two children together.</p>

<p>Van Hansis is known for paying Luke Snyder on As the World Turns from 2005 until the show’s final episode on September 17, 2010. Luke was one of the earlier characters on soap operas to come out. The actor went on to play Thom in the popular web series Eastsiders. Hansis came out as gay in The Fight Magazine in May 2014. He has been with his partner actor and singer Tyler Hanes since 2007.</p> 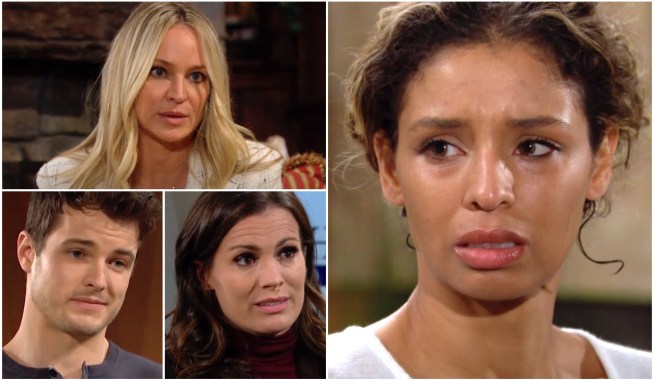 The Young and the Restless Is Suddenly Hot as Hell Again — How’d the Show Get *That* Good *That* Fast?

Young & Restless’ Joshua Morrow and Michelle Stafford Share Backstage Secrets, Including Her Biggest Challenge and the Story He Would 'Refuse to Play' 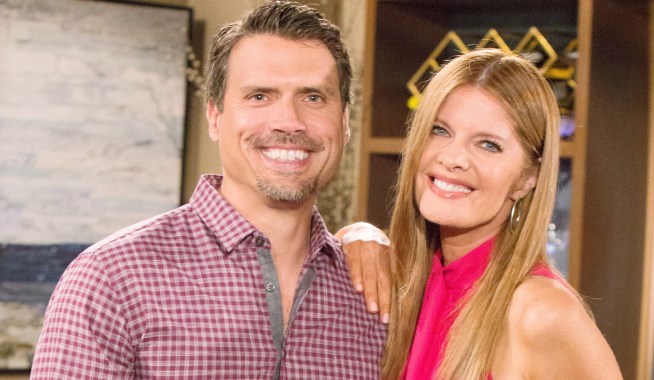