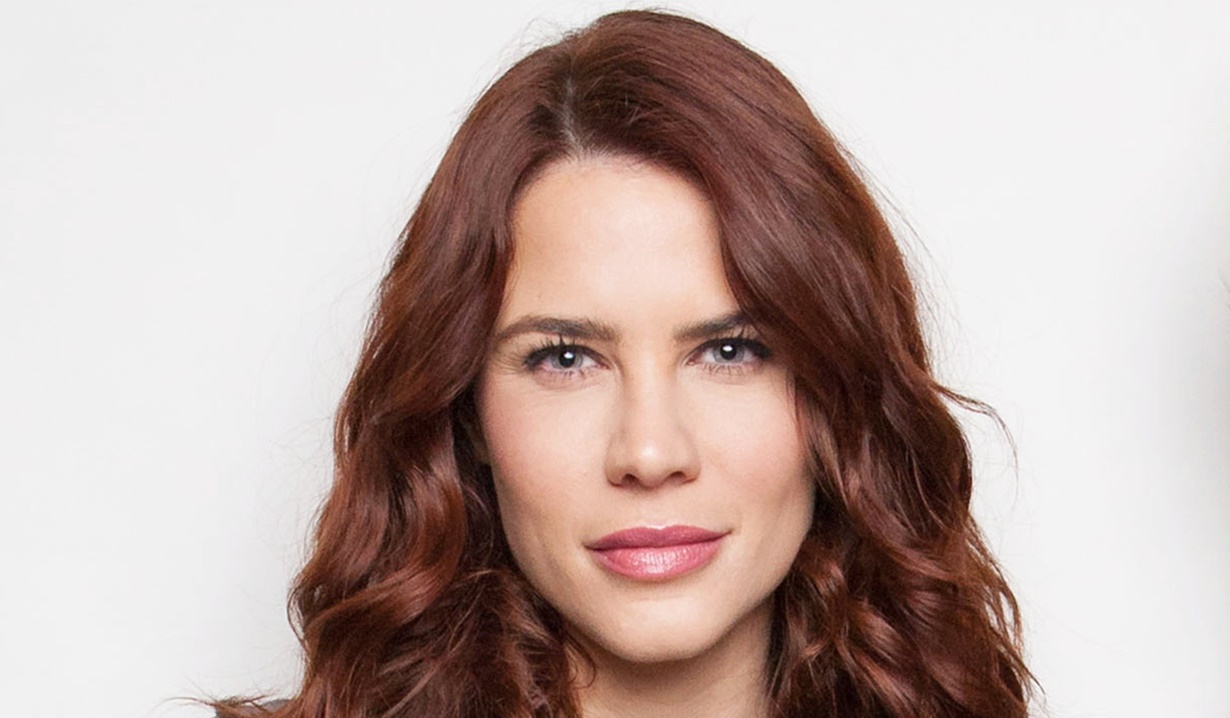 Young and Restless newcomer opens up about personal health journey.

Actress Courtney Hope checked in on social media with some real talk about her health and shared a pin-up worthy and kickass photo to go along with it. Hope was cast on Young and Restless in an as yet unknown role on the heels of being let go from Bold and Beautiful as Sally Spectra, in a move that shocked both the actress and her fans. Of her health journey, noting she normally doesn’t ‘get personal’, Hope revealed, “My hormones are kicking MY ass the last two weeks after getting off and having withdrawals from my asthma meds that TORTURED my body and nervous system for over the last two years.” She elaborated, “I’ve felt bloated, swollen, moody, miserable, asthmatic, hot, then cold, afraid, and tired AF.”

This sounds just awful, but she also had a positive spin, which focused on being kind to herself and explained, “I’m growing, learning and cleansing myself, I’ve been working out diligently navigating exercise induced attacks, stretching a lot…” Hope gave her personal trainer a shout-out before adding, “The need for healing has outgrown my deep seeded fears, and my body is doing what it needs to heal and survive off of my asthma medicine of 25 years.”

The gorgeous actress also credited her significant other, Chad Duell’s (Michael Corinthos, General Hospital) faith for coming to her rescue along with herbs, vitamins, and teas. Though she doesn’t feel herself, Hope reported she ‘can breathe’ and is proud of herself for putting in the work and ended her post with an empowering message, “LOVE YOURSELVES LADIES and GENTS! Regardless if you feel 💯 or not, own your power, own your worth, own your healing, own your body, own your desires to cleanse and empower yourself however that presents itself in your life, and own your capacity to love others through loving yourself (or sometimes loving yourself through fully accepting others love for you when times get tough)!”

Pretty much ⏰💋💪🏼 ——————————————— MUCH NEEDED REAL TALK (cause I normally don’t get this personal): my hormones are kicking MY ass the last two weeks after getting off and having withdrawals from my asthma meds that TORTURED my body and nervous system for over the last two years, possibly more (unbeknownst to me until recently). BEING KIND TO MYSELF HAS BEEN ESSENTIAL LATELY. I’ve felt bloated, swollen, moody, miserable, asthmatic, hot 🥵, then cold 🥶, afraid, and tired AF. BUT within that comes how happy I am that I’m growing, learning and cleansing myself, I’ve been working out diligently navigating exercise induced attacks, stretching a lot, LEG DAYS ARE ON FIRE thanks to my trainer @alecthetrainer supporting me🔥(hence my proud booty pic SO choose kindness), cardio is a must in a whole new way, meditation is making its way to new uncharted waters, the need for healing has outgrown my deep seeded fears, and my body is doing what it needs to heal and survive off of my asthma medicine of 25 years. 😷: (Herbs, vitamins, teas and @duelly ‘s faith 🙏🏼😇 to the rescue, ATM) Do I feel my best? No. Do I feel as sexy as I’d like? No. Do I feel like I’ve got this new journey off old asthma meds figured out? No. Do I love myself regardless and revel in the little moments everyday when I remind myself I am alive, I CAN breathe and choosing to create a happy/ well-balanced/ natural life? YES! Am I proud of the work I’m putting in? YES. Do I finally feel like just being ME how I was created and not care what anyone else thinks I should and should do? YES. Do I feel like my body needed this break to see what it’s truly made of? HELL YES. LOVE YOURSELVES LADIES and GENTS! Regardless if you feel 💯 or not, own your power, own your worth, own your healing, own your body, own your desires to cleanse and empower yourself however that presents itself in your life, and own your capacity to love others through loving yourself (or sometimes loving yourself through fully accepting others love for you when times get tough)! ❤️💋🙏🏼🥰 ALSO- fav undies FTW, always making me feel a little more comfy/cute 🌻. @loungeunderwear #loungeunderwear #femalefamily #owningmyscars

Asthma is a condition in which the airways in your lungs are often swollen or inflamed and extra sensitive to triggers in the environment. When an asthmatic person breathes in a trigger, the insides of your airways swell even more. This narrows the space for the air to move in and out of the lungs and the muscles that wrap around your airways also can tighten, making breathing even harder. This is what’s known as an asthma attack. The condition is incurable but can be managed, according to the American Lung Association.

All the best to Courtney Hope on her health journey.

Do you have any experiences with asthma? Who are you hoping Hope will play on Young and Restless? Browse our photo gallery of the actress playing Sally Spectra on Bold and Beautiful, then get your free daily soap opera fix for Young and the Restless, and all other soaps delivered to your email inbox by signing up for Soaps.com’s newsletter.

What Lola’s Moodiness Could Really...