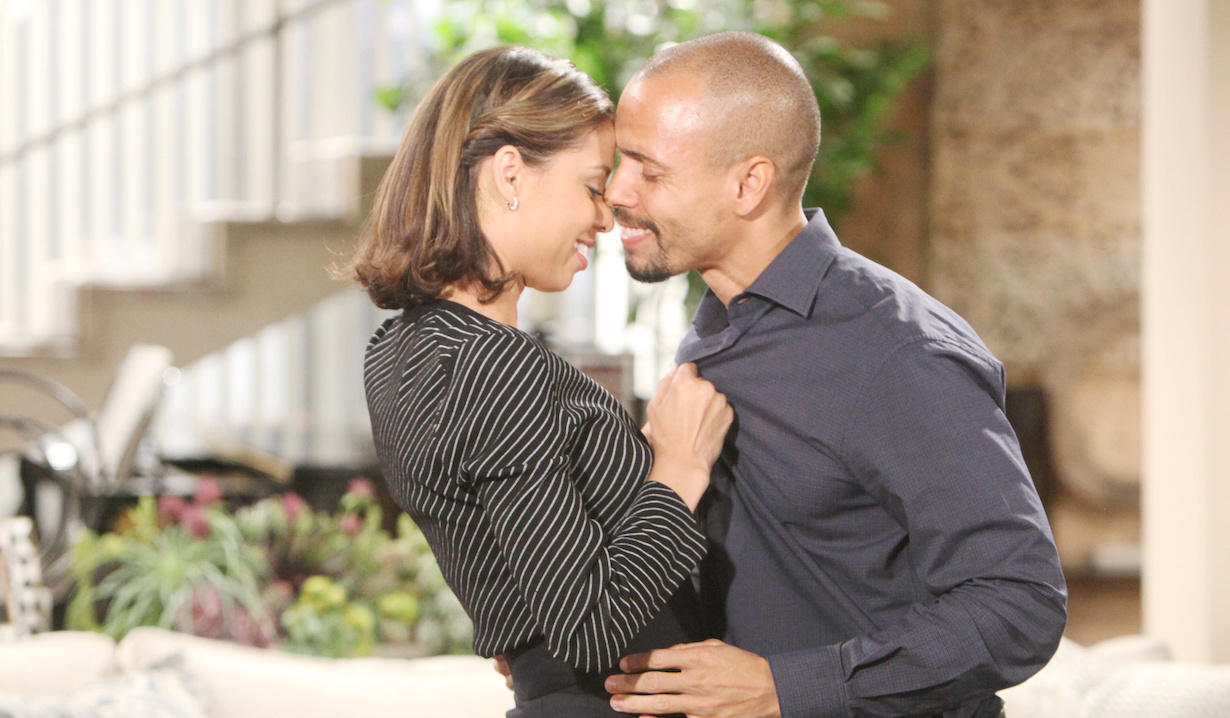 Even as Devon fell for Elena, their portrayers were falling for one another!

Sometimes, things just happen the way they are meant to happen. For example, had The Young and the Restless cast anyone but Brytni Sarpy in the role of Elena, the actress might not have found her way into the life and arms of true love Bryton James (Devon).

In fact, think about all of the pieces that had to fall in place for their worlds to collide. The wildly popular Mishael Morgan (ex-Hilary; now Amanda) had to decide that she wanted to take a break from the soap, clearing the way for the writers to create and cast a new love interest for Devon. Sarpy had to decide that it was time to leave General Hospital, where she was being woefully underused as Valerie, and audition for the part that would bring her to Genoa City.

But clearly, the fates were determined that Sarpy and James should wind up together. Since the fateful day on which their paths first crossed — in the CBS parking lot, believe it or not! — we’ve had the pleasure of seeing their love bloom… literally, right in front of our eyes! Because what we didn’t realize at the time was that as we were watching Devon and Elena grow closer, their portrayers were following the same path as that of their characters!

“I remember I wanted to impress her,” James told Soap Opera Digest of the first scenes they did together (which, it’s worth noting, were taped on Valentine’s Day!). We’d say he definitely managed to do that… and more! For the entire story behind this adorable couple’s on- and off-screen romance, read on! 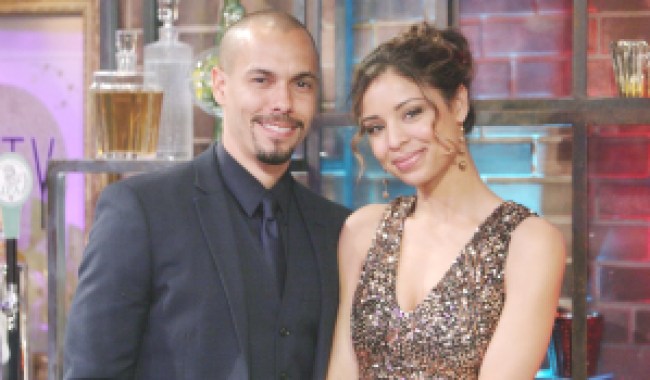 “Obviously, Bryton and I never got along,” joked Sarpy during an interview with CBS Watch magazine before quickly adding, “No! We hit it off, literally from day one!” In fact, when on the day of her screen test, Sarpy couldn’t figure out where to park, she said that James “happened to be the person that I asked for help. I didn’t know he was the one I was going to screen-test with until we went upstairs. We laughed, and just had great chemistry and became fast friends!” 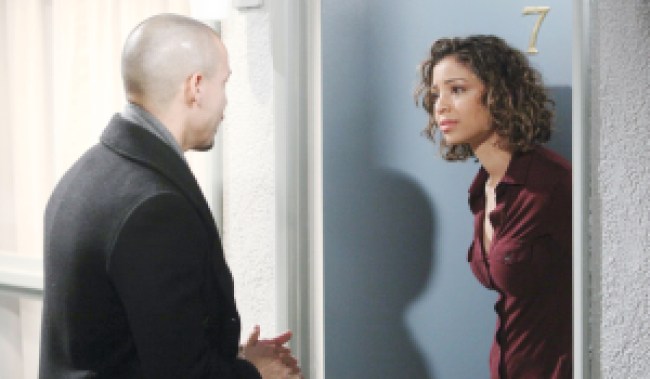 Having already put them on the same set, fate took things a step further by making sure that Sarpy’s very first scene would be shared with none other than James. Fans of the pair likely won’t soon forget the episode of The Young and the Restless which aired on March 19, 2019, in which Devon knocked on the door of a motel room to find Elena on the other side! 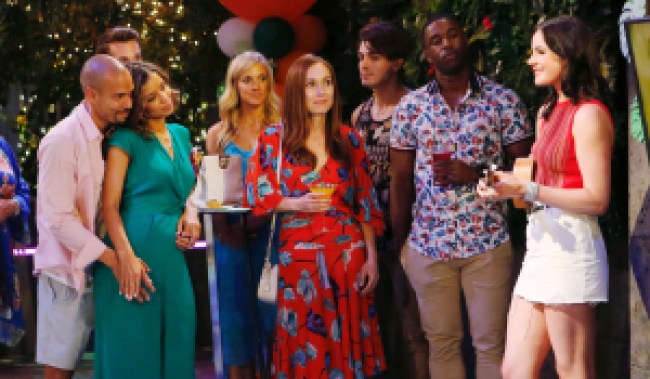 Getting to Know You

Despite having clicked from the start, it was a Genoa City party which actually gave the twosome a chance to connect. “All of us spent all day together on set,” James told Soap Opera Digest of the fictional fete, which between set-ups left the actors with a lot of downtime. In chatting, he found Sarpy to be “a lot more fun” and with “a better sense of humor than I thought originally. We realized she was as goofy as me!” Added Sarpy: “After really talking to him, we just shared a lot in common, and it was really cool. We got along really well!”

Long before the pair went public, we began to suspect that, like their on-screen personas, Sarpy and James were getting closer. For example, there was the trip to Tokyo during which they celebrated her birthday. In detailing the journey on Instagram, James dubbed it “the best trip with the best human,” thanking Sarpy for “sharing the celebration of such a special year with me.” Not surprisingly, Sarpy declared it had been her “best birthday yet!”

I Am Jack's Complete Lack of Surprise

No Tricks, All Treats

A few weeks after their jaunt to Japan, the pair celebrated Halloween by donning a “couples costume.” Too young to recognize the characters they’re portraying in the Instagram photo above? Why, that’s Marla Singer and Tyler Durden — played by Helena Bonham Carter and Brad Pitt — from the classic flick Fight Club. Although Elena and Devon’s on-screen relationship was the talk of Genoa City by this time, Sarpy and James had not yet disclosed their relationship. So in this case, the first rule of fight club was “Don’t talk about who in fight club is dating!”

“Celebrating love is one of my favorite things to do,” Sarpy told Instagram followers as she and James attended a party for friends of hers who’d tied the knot 16 years earlier. Even as we were pondering if they’d gone as a couple or a couple of friends, Sarpy finally confirmed what we’d been suspecting for months… sort of. “It’s official,” she captioned a photo of herself and James, each smiling ear to ear. Well, actually, what she said was, “It’s official… ly still summer.” But what with it being November and all, we knew exactly what she meant!

I’m all for any day that celebrates love, as it is an incredibly rare, unpredictable, and truly special thing to find… I can honestly say I have never felt more protected, loved, and understood in all my life. Thank you for being the squared to my B. 🖤 @brytonejames

From that point on, it was all love, all the time. Take, for example, this beautiful shot of the pair canoodling on Cupid’s favorite day back in February. “I’m all for any day that celebrates love, as it is an incredibly rare, unpredictable and truly special thing to find,” Sarpy wrote. “I can honestly say I have never felt more protected, loved and understood in all my life.” By this time, the couple whose on-screen pairing had been given the “squish” name Elevon, Sarpy and James — aka Bryton and Brytni — had become B-Squared. “Thank you,” she wrote, “for being the squared to my B.” 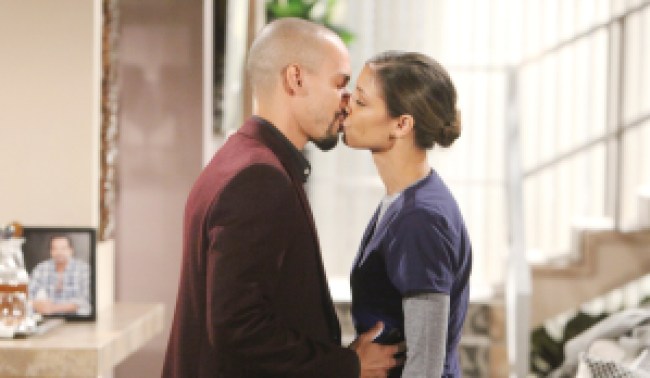 In a case of art imitating life, it turns out that Sarpy and James’ relationship hit at least one major milestone at almost the exact same time as their characters! Asked by CBS Watch whether the actors or characters fell in love first, Sarpy admitted it was a virtual tie! “[Elena and Devon’s] ‘I love you’ scene is really poignant, because it was right around the time we also said [it]. So it was so very, very real and so vulnerable.”

Time Flies When You’re Having Fun

On May 25 of this year, Sarpy shared that she and her beloved were marking a special occasion. “Feels like forever and just yesterday at the same damned time,” she wrote in a post marking their one-year anniversary. Posting the same photo on his own Instagram feed, James wrote, “To spend one with the one feels like I’ve won.”

Making A House into a Home

We suspect that when Sarpy and James joined several of their co-stars for a post-shutdown video chat, they never imagined that the special edition of GC Buzz would result in their new living arrangement being exposed. (You can watch the blush-worth moment in the video above.) “We actually just bought a condo together and moved in about a month before quarantine,” Sarpy told CBS Watch. “Thankfully, we weren’t in the middle of moving or anything!” Of course, neither expected that right after making this change, the world would shut down! “If there was ever a test,” she joked, “I guess we go hard! ‘We’re going to move in together and spend 24 hours a day together!”

What’s Next For the Couple?

Needless to say, living together has made getting through the whole isolation thing much easier for the pair. As it turns out, it’s also sparked their creativity! During a recent episode of the Soap Opera Digest podcast, James shared that while he was “itching to get back to work,” he and Sarpy had “started a writing project” which involves turning a book to which she has purchased the rights into a script. During that same discussion, he admitted, in remembering the day he first met Sarpy in the CBS parking lot, that he “fell in love right away.” His voice filled with emotion, he said, “I feel extremely, extremely blessed to have my life change in the way it has over the past year.”

Want to keep that lovin’ feeling going? What better way than by visiting the gallery below to spend time with other stars of The Young and the Restless and their real-life partners?