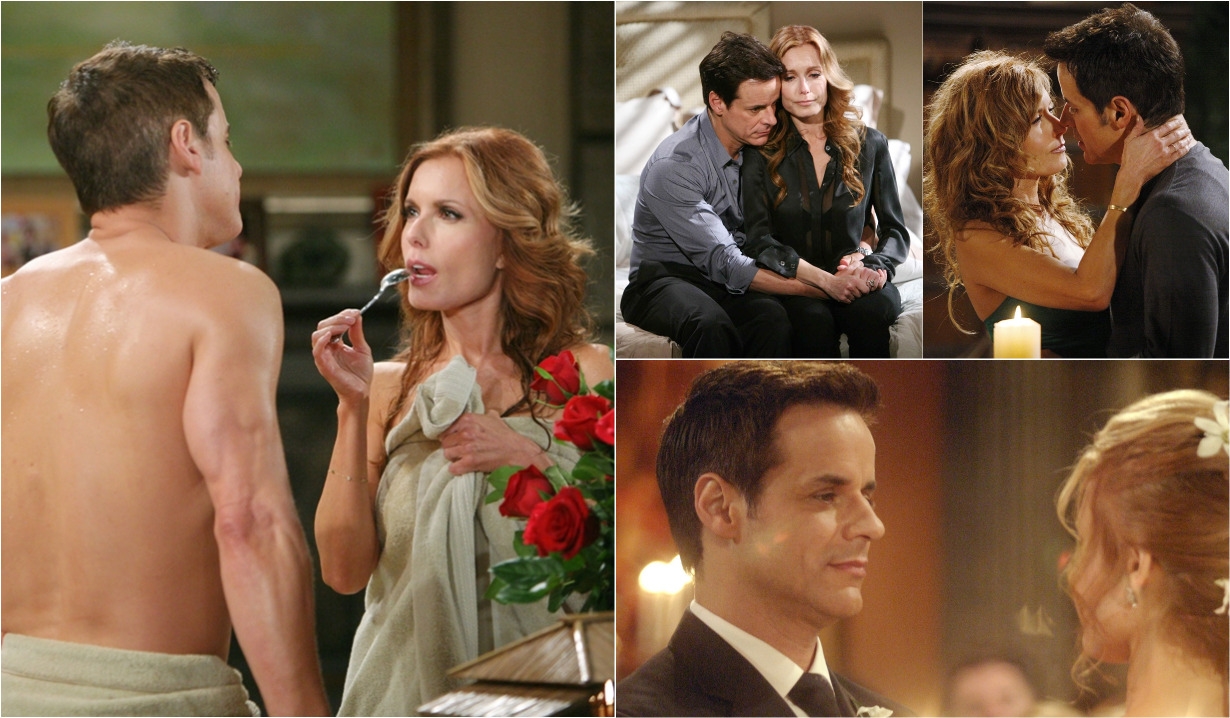 Young and Restless couple has had their share of trials, tribulations, and terror.

Michael Baldwin (Christian LeBlanc) and Lauren Fenmore (Tracey Bregman) have one of the most impressive marriages on Young and Restless, and will celebrate their 15 year anniversary in December 2020. With Michael and Lauren’s honeymoon episode airing as part of Villains’ Week, we took a look back over their story…

Michael and Lauren’s love blossomed after his younger brother, Kevin Fisher (Greg Rikaart) became obsessed with her. Kevin held Lauren at gunpoint after he realized she’d set him up by agreeing to attend the Valentine’s Day dance at the Athletic Club with him in hopes he would confess to his crimes. Michael intervened and saved Lauren, who came to take pity on Kevin, who had been abused by his father, Tom Fisher. Michael and Lauren grew closer while meeting to discuss Kevin, and became lovers.

Michael proposed to Lauren in the Athletic Club’s private dining room, which he had set up as a casino. Lauren hesitated due to Michael’s communication issues, but agreed to marry him.

Lauren and Michael’s wedding was postponed when Sheila Carter (Kimberlin Brown) dipped Lauren’s necklace in poison, which landed her in the hospital just as she and Michael were to share a romantic rooftop dinner the night before the ceremony.

Lauren and Michael married, but Sheila had Tom Fisher plant a bomb on their honeymoon yacht. After it exploded, Lauren was presumed dead, but Tom had locked her and Sheila up in the basement fallout shelter in an old farmhouse. Paul Williams (Doug Davidson) saved Lauren and Michael was tearfully reunited with his bride.

More: Vote. Should Adam be with Chelsea or Sharon?

After Lauren discovered she was pregnant, she and Michael decided to track down his estranged father, but all they were able to find was an old diary. The expectant mother was forced to deal with Michael’s mother, Gloria (Judith Chapman) and Kevin moving in after they were expelled from the Abbott mansion, and when Lauren learned Michael was in on Glo’s scheme at Jabot, she went into premature labor and gave birth to their son, Fenmore.

Lauren and Michael’s lives were turned upside-down yet again when Sheila had plastic surgery to look like Phyllis Summers (Michelle Stafford) and plotted to steal Lauren’s baby. While the real Phyllis bonded with Lauren over their children, Fen and Summer, and helped Lauren deal with postpartum depression and anxiety attacks, Paul and Michael captured Sheila. Sheila escaped and captured Phyllis, who was freed when Lauren shot Sheila. Once again, Lauren, Michael and their son were safe.

When Kevin married Jana (Emily O’Brien), the officiant at the ashram where they wed turned out to be none other than River Baldwin, Michael’s father. Lauren and Michael learned he had a half-sister, Eden (Erin Sanders, Vanessa Marano, Jessica Heap) and took her in for a time until she went to live with an aunt in Paris.

Lauren began being terrorized by Daisy (Yvonne Zima) and Ryder Callahan (Wilson Bethel) and their aunt, Sarah Smythe, who was Lauren’s doppelganger and Sheila’s sister. Sarah took over Lauren’s life with Michael while Lauren and Jana were held captive in an old amusement park, then plotted to kill him. During the rescue, Michael wound up caught between the two ‘Laurens’ who were both armed. Lauren shot Sarah.

Michael and Lauren were happy again for a time, but Lauren kept taking hits. First, Jill Foster Abbott (Jess Walton) was revealed to be her half-sister and took a stake in her business, then Daisy returned to Genoa City pregnant with Phyllis’ son, Daniel’s (Michael Graziadei) child, and Lauren’s panic attacks resumed. Daisy ran after abandoning her newborn daughter, and Lauren and Michael had a fall out with their close friend Phyllis when she brought Daisy back to help her get temporary custody of Lucy, who had been adopted by Billy (then Billy Miller) and Victoria (Amelia Heinle). Lauren and Michael moved into the Chancellor Mansion when Daisy ended up staying in their building, and Lauren was charged after holding Daisy at gunpoint when she entered Fenmore’s.

Michael became A.D.A. and Lauren surprised her husband by bringing their teenage son, Fen (then Max Ehrich), home from Toronto. Michael and Lauren celebrated their wedding anniversary with a night of extravagant romance.

Lauren and Michael became estranged when Fen began getting in trouble and bullying. Lauren moved out and had an affair with Carmine Basco (Marco Dapper). She and Michael unsuccessfully attempted to reconcile several times before seeing a therapist and agreeing to give their marriage 30 days. On the thirtieth day, Michael tore up the divorce papers as they loved each other and decided to stay together. Carmine eventually disappeared after causing them more trouble with his obsession.

Michael and Lauren’s marriage was back on track and she was stunned to discover she was pregnant, which threw Michael for a loop, but they were happy. It turned out she was just run down from working too much.

Michael became unable to perform sexually and was diagnosed with prostate cancer. As he began undergoing treatment, their marriage hit the rocks again when he began pushing Lauren away and asked for a separation. Lauren and Cane (Daniel Goddard) kissed and Michael forced his wife to sign divorce papers.

Lauren and Michael’s marriage was saved when he expressed his regrets and asked her on a date. Lauren then invited him to move home.

Jack Abbott (Peter Bergman) noted Lauren and Michael still behave like newlyweds. Lauren pointed out they knew all too well what it was like to be apart. Most recently, Lauren and Michael made love in the Chancellor living room in front of the fireplace, while stranded there during a storm.