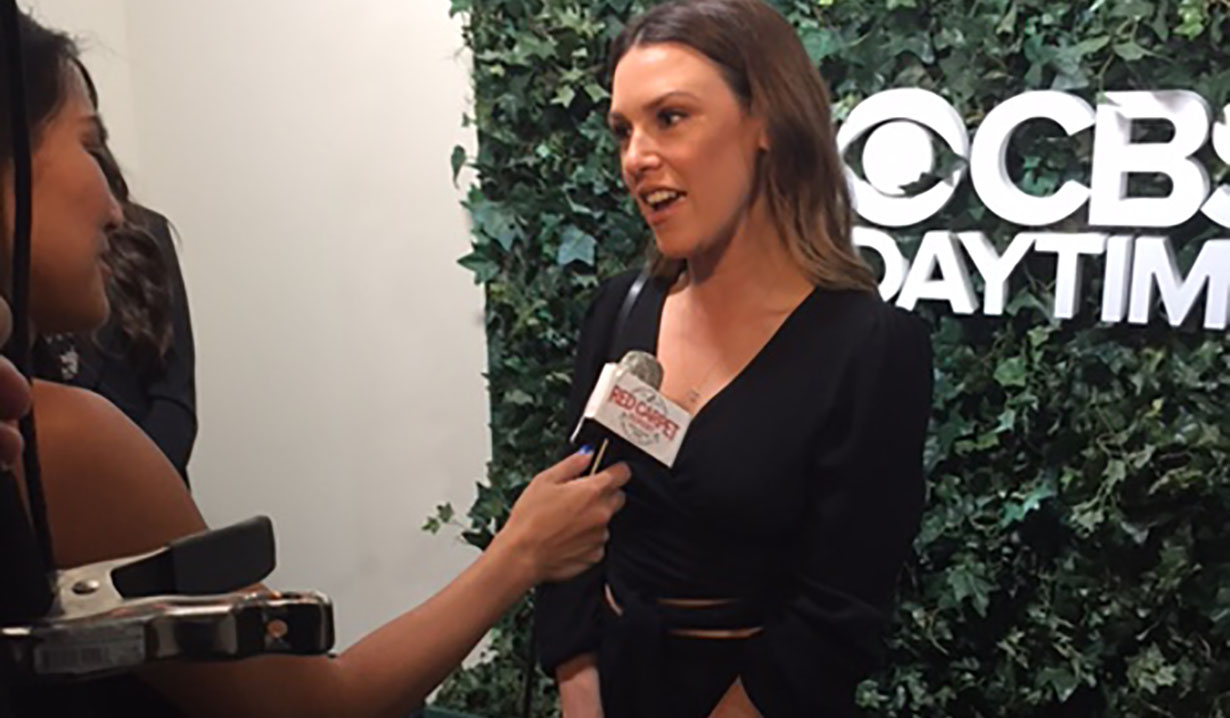 Red carpet interviews, photos and highlights of Soaps.com’s coverage of CBS’ celebration of 30 years at #1.

CBS Daytime pulled out all of the stops on Monday night at the Paley Center for Media in Beverly Hills, California to celebrate 30 years in the #1 spot in daytime television. Stars from “The Young and the Restless” and “The Bold and the Beautiful” were in attendance, along with former stars of “Guiding Light” and “As The World Turns,” to honor a new exhibit which features set pieces, memorabilia, costumes and photos from the shows.

Take a look at some of the video clips highlighting your favorite CBS soaps from today and yesterday.

The cast members also hit the red carpet before checking out the exhibit and mixing and mingling with the entire roster of CBS Daytime talent. Several soap stars were caught capturing their favorite moments in the exhibit on social media or looking back in time with special moments from eras gone by.

On the red carpet, Soaps.com spoke with Elizabeth Hendrickson about the return of Chloe Mitchell and the drama she is causing Genoa City.

“What’s new for me is that every day I open my script and say, ‘Oh no, what am I doing.’ Chloe is getting involved in more storylines,” she said. “I am working with more characters. I have scenes coming up with Sharon Case (Sharon Newman). Chloe has more relationships and it’s kind of fun.”

She also has some future scenes with Steve Burton (Dylan McAvoy), who recently announced he is leaving the show at the end of his contract in December.

“It’s sad for me because I really just started to get to work with him and get to know him,” she explained. “I worked very little with him when I was on the show before because our roles didn’t interact a lot.”

Christel Khalil (Lily Winters Ashby) told Soaps.com that things are about to turn a bit darker for Lily in the coming months.

“She’s dealing with her husband who’s been working a lot and kind of neglecting the family,” said Khalil. “So the writers are prepping us for a bigger storyline that’s about to happen. It’s been smooth sailing for awhile for Lily and Cane (Daniel Goddard), so finally things are a little darker.”

Kate Linder (Esther Valentine) knows better than anyone why fans continually stick with CBS for their soap fix. She explained why Esther was so relatable.

“Esther is a single mother. Her daughter [Chloe] doesn’t always like her and is sometimes embarrassed by her,” she shared. “That happens in real life and people who tune in can always understand that.”

Getting all of the good soap secrets @cbsdaytime #1for30 celebration last night for @soapssheknows. ??? ?: @iamwalkerr

“The Bold and the Beautiful” star Rena Sofer clued us in on what is happening with Quinn Fuller these days.

“She’s doing great, but she’s softer, gentler, kinder. There’s been lots of growth. Quinn stirs the pot, but she’s not innately evil or mean. She’s just not aware of the outcome of her behavior,” said Sofer. “She does things because that’s the way she thinks that’s the way to get to that point. She doesn’t realize the destruction she creates along the way.”

Heather Tom, who plays Katie Logan, explained to Soaps.com why fans relate to her character so much.

“Fans like Katie because she’s loyal and she’s flawed,” shared Tom. “She’s not perfect and I feel like if half the people love Katie and half the people hate Katie, I’ve done my job because everyone’s watching what she’s doing.”

Don Diamont (Bill Spencer, Jr.) loves that fans have an affinity for his character, but he chuckled when he described how Bill operates.

“You have to be a little twisted if you like Bill Spencer,” he laughed. “He appeals to that little thing that lives in all of us that everyone tries to hide — that dark and twisty part.”

Jacob Young (Rick Forrester) mysteriously teased us with an upcoming storyline for his character. Can you figure it out?

“There’s another challenge coming up, but it’s good,” he speculated. “It’s something that may have happened before.”

Jennifer Gareis (Donna Logan) is excited to be back on “The Bold and the Beautiful,” but her character has an agenda.

“Donna is about to set some people straight,” said Gareis. “She hopes she can get through to people. She wants them to hear it, but some people turn a deaf ear to what she’s saying. Stirring the pot, but setting them straight while adding a little spice in there.” Felisha Cooper (Sasha Thompson) knows that Sasha hasn’t had an easy time, but she thinks fans are appreciating her journey.

“My character has had such dynamic ebbs and flows. First she was the mean girl and then she has a heart, then she was conniving again,” Cooper said. “With the back and forth, you have to find a way to make it believable and human to justify any reasons why I am doing something.”

There was also a huge outcry from fans this summer because many viewers were worried that Ivy Forrester, played by Ashleigh Brewer, was going to be pushed out of the series. Everyone breathed a huge sigh of relief when Brewer returned to the show.

“Ivy is back in LA. She’s establishing life here again,” she said. “I think she’s sitting back and observing a lot. She’s not at a stage yet where she’s stirring too many pots, but she’ll get there.”

Brewer did appreciate the fan support when there was speculation that Ivy would no longer be on the show.

“It was hard to ignore the fan talk. I would put up a photo of my family and it’s only Ivy talk,” she laughed. “It’s been really nice to be back and be a part of the ‘Bold’ family.” It was also wonderful to see the legacy shows like “As The World Turns” represented in the exhibit. Colleen Zenk, who played Barbara Ryan from 1978 through 2010, shared some of her memories from her time on the soap.

“It’s overwhelming to be here. I miss my family from the show. We are a close-knit group and we get together all of the time in New York. We all grew up on the show. I was there for 32 years. It was a wonderful place to work.

Zenk also described why “ATWT” had such a successful run.

“Our show was about family and it was centered,” she said. “It was about real relationships and real people… occasionally there would be something wacky, but most of the time it was about the emotional storylines that people could relate to.”

Longtime viewers will remember that her character married the 20-years-younger Henry Coleman played by Trent Dawson. For Zenk, it was the perfect ending for Barbara.

“It couldn’t have been a better end for Barbara Ryan — her ninth marriage to this incredible man whom no one expected her to be with,” she said.

And does Zenk think her character is still married to him to this day?

The CBS Daytime exhibit runs from October 12 – November 27 at the Paley Center for Media in Beverly Hills, California.